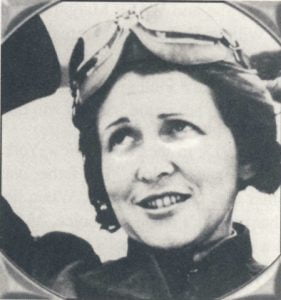 Aline Rhonie was born as Aline Rhonie Hofheimer in York, Pennsylvania, on August 16, 1909. She was born into the notable Hofheimer family of York township. She moved from York to New Jersey at the age of three. Rhonie attended Dalton School in New York. Rhonie married Richard Bamberger, a member of a wealthy New York family, when she was 17.

She became interested in flying after helping two pilots who had crash-landed near her grandfather’s golf course.

In 1930 she moved to Reno, Nevada, when she was 19. Aline learned to fly at the age of 21. She started flying in a De Havilland Moth with a Gypsy engine. She bought her first plane in January 1931 received her transport license.

Rhonie divorced Bamberger in December 1930 in Reno. After the divorce, she took her middle name, Rhonie, as her last name. In 1931 she met a nephew of Lady Astor, Reginal Langhorne Brooks. Brooks was a Marine Corps aviator and was learning Morse code, which he shared with Rhonie. When they got married in 1933, they flew 17,000 miles in separate planes to their honeymoon, flying through various locations including the West Indies and Mexico. Rhonie was the first woman to fly solo from New York to Mexico City and back. Later, in 1937, Brooks divorced Rhonie.

In 1933, she helped found the Luscombe Airplane Company in Kansas City, Missouri. She also flew gliders, test-flew Coupes, Luscombes and Monocoupes, and eventually got her twin-engine as well as seaplane ratings. She earned an English pilot’s license in 1936 and in 1938 was the first American to obtain an Irish commercial pilot license.

During World War II, she participated in the British war relief effort. She first applied to ferry planes from Britain to France, but since she wasn’t British, was rejected. Instead, she started driving an ambulance in France. In 1940, in addition to working with the French Aero Club, she was also chair of the Aviation Committee, British War Relief Society in New York City. As a volunteer, using her own plane, she flew 26,000 miles around the United States in 1940/41 organizing committees and arranging benefits for relief of the Royal Air Force.

Initially, Rhonie tuned down the opportunity to fly for the Air Transport Auxiliary in England when Jackie Cochran was looking for volunteers in 1942, hoping for a similar opportunity in the U.S. She got it with Nancy Love’s telegram on September 5, 1942 inviting her to try out for the WAFS. She was the fourth woman accepted, but she only served until the end of December 1942 when she resigned. By then, she had taken part in several ferrying missions, flying Cubs and PT-19s.

On November 30, 1943 she joined the ATA and her release date was November 19, 1944. She was the only woman to fly for both Nancy Love’s Originals and Pauline Gower’s Air Transport Auxiliary (ATA).

Rhonie is perhaps best known for her aviation artwork. She learned mural painting from the Mexican painter Diego Rivera. Rivera taught her how to paint in the fresco style. Her best-known mural is the “The Pre-Lindbergh Era of Aviation on Long Island”, a 126-foot-long 1,400-square-foot fresco representing aviation history at a hangar in Roosevelt Field, Long Island. Rhonie did the research for the mural herself and she worked on it between 1934 and 1938. It has since been relocated to the Vaughn College of Aeronautics and Technology in Queens, New York. When Rhonie found out that the hangar at Roosevelt Field was going to be destroyed in 1960, she obtained the rights to the mural and convinced Italian fresco expert, Leonetto Tintori, to come to the U.S. to help relocate the mural. After the mural was taken down, she helped restore the panels and then added 25 more portraits. 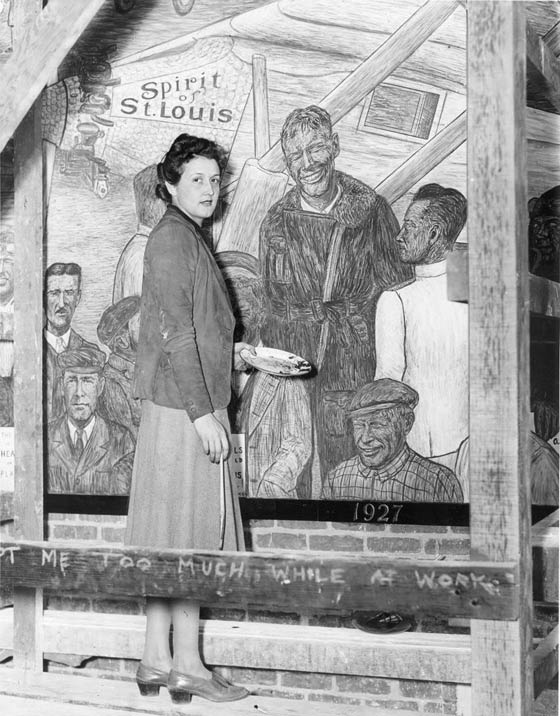 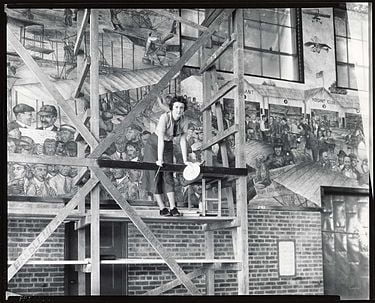 Her work at Roosevelt Field in the late 1930s features a painting of a mural on the wall of a hangar. This was a huge mural, extending over 100-feet. The subject was aviation progress in the 20th century, and there were over 300 personalities and aircraft of the period represented in her mural.

Rhonie won several awards and recognitions, including membership of the French national association of the Croix de Guerre for her service in the French Red Cross, Médaille de la Reconnaissance française, and was made a Companion of the Ordre de la Libération. She was inducted into the New Jersey Aviation Hall of Fame in 2010. A collection of her papers was donated to the National Air and Space Museum of the Smithsonian Institution in 2014