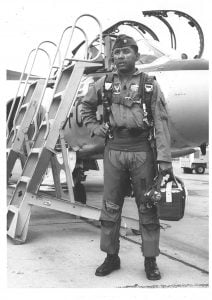 Lt. Col. Asa Herring leaves a legacy of service, featuring his ongoing work to spread knowledge about the Tuskegee Legacy.  His friendly face was well known throughout the Commemorative Air Force community, especially with our own RISE ABOVE team and that of CAF Airbase Arizona.

Born Oct. 3, 1926, in Dunn, North Carolina. He was born at a time when African Americans had few rights and even fewer opportunities, but he would defy the odds and lead a life which nearly nine decades later would-be part of an incredible journey for him and a nation.

Herring graduated from high school at age 16 but had to wait until he was 18 before he could enter the military. He had passed the Army Air Corps written examination at age 17 and entered active-duty as an aviation cadet, Dec. 27, 1944.

As an Aviation Cadet he flew the Stearman PT-17 and the AT-6. When it became clear that World War II was in its final stages and Germany had surrendered, the “Tuskegee Experiment” was one of many other flying schools scheduled to be eliminated. Because of segregation policies in the military and the desire to further his education, Herring chose to be honorably discharged from the program in 1946.

After he was discharged, Herring graduated from several technical schools and received his credentials from the Civil Aeronautics Administration as a certified Aircraft and Engine Mechanic and Aircraft Ground Instructor. Despite his certifications, he was unable to obtain employment with an airline or fixed base operator, said the Archer-Ragsdale Arizona Chapter in a statement.

When the Air Force became its own autonomous branch of the military and segregation was banned in the military, Herring volunteered for military service in June 1949.

He was the first Black Squadron Commander at Luke Air Force Base and trained pilots from several European countries in the F-104G Jet Fighter Gunnery Program.

During his 22 years of military service he served in England, Korea, Germany, Vietnam and had other temporary assignments worldwide. He was the first Black Squadron Commander at Luke Air Force Base and trained pilots from several European countries in the F-104G Jet Fighter Gunnery Program. He was officially appointed an honorary Command Pilot in the German Luftwaffe.

He said his years in the military gave him a special confidence and a new perspective.

“You know you can do something, but people won’t let you do it,” he said. “Once you are in a combat situation such as in Vietnam, you get a different perspective. I realized that we were in it together and color didn’t matter.”

Herring’s more than two decades of military service included three tours of duty at Luke Air Force Base, where he was the first African-American squadron commander. He trained pilots in the F-104G Advanced Jet Fighter Gunnery Program. He was officially appointed an honorary command pilot in the German Luftwaffe. Not only that, Herring flew a plethora of aircraft, which included the PT-17, AT-6, F-51D, T-33, F-86A, F-84, F-100C, D, F and G, and the F-104G.

After retiring from the military, Herring’s pace didn’t slow at all. He spent the next two decades at Western Electric, which at the time was the manufacturing arm of American Telephone and Telegraph. He retired in 1989.

Community service in many facets is a strong aspect of his legacy. His service included being a member of the Phoenix Union High School Vocational Advisory Board, the chairman of Phoenix Municipal Aeronautics Board and the Phoenix Community Development Block Grant Committee.

Lt. Col. Asa Herring leaves behind a legacy of service to his nation which he summed up beautifully by remarking, “We fight and die for is to have justice and equality both here and abroad.”