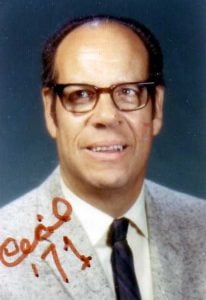 If there is a theme to Cecil Peterson’s life, it is one of service and preservation. Indeed, Lt. Peterson made history twice; once because of his World War II military service, and once because of a very special friendship and correspondence he had with First Lady of the United States, Eleanor Roosevelt.

Cecil Peterson was born on February 21, 1919, in Buffalo, New York. His father was Sneedy Rodney Little from California and his mother was Zoe Louise Tolliver. Cecil’s half siblings were Josephine, Oscar, and Hazel. His mother passed when he was only one years old, during October 1920, leaving him orphaned. Cecil’s childhood was spent in foster homes and state run institutions, such as New York’s State Training School during the 1930s. By the 1940s, despite the many challenges he faced being an orphan, Cecil still managed to become an active and engaged leader among his peers.

During 1941, Cecil was a student government leader for the National Youth Administration. This WPA federal program was designed to help high school students affected by the continuing Great Depression find work. One of the most vocal supporters of the NYA was First Lady of the United States Eleanor Roosevelt. Cecil was selected to present the First Lady with a plaque during her visit to the NYA home at Quoddy Village, Maine on July 21, 1941.

By 1942, Cecil had enlisted in the United States Army, serving as a private at the Army Air Corps Advance Flying School in Tuskegee, Alabama. Recognizing the important role that the Tuskegee Airmen training there were playing in the immediate war and in the future cause of equality, Cecil began a lifelong fascination with preserving as much of that history and artifacts of the time as possible. Little did he know, he would himself play a historical role.

First Lady Roosevelt had shown support for the Tuskegee Airmen training program from its inception after Public Law 18 (April 3, 1939) directed the creation of an African American pilot training programs and after the beginning of the 99th Pursuit Squadron (January 16, 1941). The First Lady had been a champion for the program, including taking her famous flight with pioneering aviator and instructor Charles A. Anderson at Tuskegee during 1941. By 1942, she was interested in learning more about the experiences of the pilots, navigators, and support technicians who were training at Tuskegee. To that end, she asked for a pen pal among the recruits to gain a firsthand appreciation. Not surprisingly because of his dedication and leadership, Cecil Peterson was asked to be that pen pal.

On May 25, 1942, their special correspondence began with a letter from the First Lady to Recruit Peterson, indicated that Eleanor Roosevelt was, “so much interested that you are at the flying school in Tuskegee, because I have seen it.” She also references that she knows that Peterson was once at Quoddy Village, expressing her support for that program, too. In his response of June 9, 1942, Cecil reminded the First Lady that they had actually met at Quoddy Village, sharing a picture of the meeting and asking “Remember this occasion?” to which she replied that she very much remembered that day.

As the letters progressed, Cecil shared his advancements and experiences. In a July 1942 letter, now Private First Class Peterson reveals his promotion and how he is taking radio classes and has been an acting Corporal. His promotion involved a transfer from the 100th Pursuit Squadron to the 83rd Inceptor Control Squadron. Sometimes Pvt. Peterson’s letters would reveal everyday challenges that were faced by soldiers training during that time, including an epidemic of mumps that affected the facility in the spring of 1943. Throughout his letters, Pvt. Peterson demonstrated great affection for the First Lady and the President, asking her to tell him that he was rooting for the President’s success. That affection went both ways, with the First Lady asking Cecil and other Tuskegee Airmen she was close with to refer to her as “Auntie Eleanor.”

Pvt. Peterson’s service included time at the Tuskegee Flying School as mentioned, and also at Guadalcanal. After World War II, Cecil would re-enlist in 1949 and 1952, serving in the Korean War. He would eventually earn a commission as Lieutenant. After his military service, he moved to Los Angeles, where he married Elaine Grace Broady on June 23, 1957, and started a family. His commitment to service did not end when his active enlistment did.

Lt. Peterson served as a Los Angeles Commissioner chairman and as a volunteer representative from Districts 6 and 8 to the California Senior State Legislature. He would participate in local events, such as marching in the Los Angeles Black Veteran’s Parade in 1981. His collection of Tuskegee Airmen artifacts and documents would be featured in museums such as the 2009 California African American Museum’s “Tuskegee: The Journey to Flight” exhibit and is held permanently at the Rivera Library in Riverside, California for future generations to learn about the contributions of the Tuskegee Airmen. In 1983, Lt. Peterson was part of the Coro Reinvest program designed to connect seasoned experts with their community. During 1984, he served as consultant to a Redd Foxx film that was in production called Auntie Eleanor about the First Lady and the Tuskegee Airmen. The film apparently was never made.

On March 15, 2006, Lt. Peterson passed away in Los Angeles.  He started life as an orphan, but along the way, became a friend, family man, and leader among many. In a July 7, 1942, letter to the First Lady, then Pvt. Peterson wrote, “Your letters and gifts have been very inspiring and have prompted me to try and be a better soldier.” The same now can be said of Cecil Peterson himself. His service and dedication to the cause of freedom and equality, and his special correspondence with one history’s most important figures, preserved now for history, continues to inspire new generations.

SPECIAL THANKS to Stanton F. Biddle and the Biddle-Peterson Family Tree on Ancestry.com for the more recent image of Cecil Peterson and for research help.