Defying expectations is a hallmark of the Tuskegee Airmen. It may seem unusual that a kid from the urban metropolis of New York City would emerge as an international agricultural expert, but original Tuskegee Airmen Dr. Fenton sands did just that, and much more. He would grow up to leave those crowded city streets for the Ivy League, serve his country, and go on to dedicate his post-war civilian career to people all over the world. Like other inspirational Tuskegee Airmen, Sands has left his mark on history.

Although Sands was born in Harlem in 1918, his family originally emigrated to the U.S. from the Bahamas to find better opportunities for work and education. The sentiment “Get an education!” ran strong in their family. The children knew that, no matter what, this was their path forward. Sands hit that first milestone in 1936, graduating from Stuyvesant High School, one of the best high schools in New York City at the time.

Now called Jackie Robinson Park, Sands was inspired by Colonial Park, 10 blocks of open space in Harlem that sparked his curious nature. Growing up across this street from this gem where city met nature, his love for science took root, eventually leading him to Cornell to study agriculture. He was defying odds – a black man from the big city majoring in agriculture at a rural and predominantly white college. 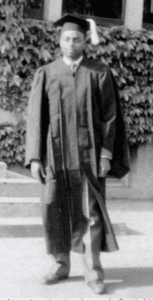 Fenton Sands at his graduation from Cornell University. All photos courtesy of Fenton Sands Jr.

He studied hard at Cornell, learned to farm, worked for a power company, and was a resident of the now-famous Telluride House. Still in existence today, the Telluride House is a unique community of Cornell scholars – undergraduate, graduate and faculty – passionate about intellectual engagement, democratic self-governance, and community living. Within this setting, Sands was afforded a rich and intense academic experience. He graduated in 1942 with a Bachelor of Science in Agriculture, majoring in horticulture and agronomy, the science of soil management and crop production. He was the first in his family to earn a college degree.

While still at Cornell, Sands applied to the U.S. Army Air Corps’ new flight training program for black men because of his interest in aviation. He also wanted the opportunity to do something worthwhile for his country that was previously restricted from black Americans. Many people in the country, like Sands, were eager to join the war effort, and wanted the chance to do so regardless of the color of their skin, in critical roles where their skills and education could make a marked difference in fighting the enemy.

In June of 1942, Sands passed the examination needed to qualify as a cadet in the Air Corps to the great delight and pride of his entire family. By December he was assigned to pre-flight training at the Army Air Force Advanced Flying Training School in Tuskegee, Alabama and his future in aviation was set in motion. 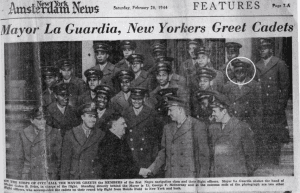 As a cadet, Sands was a part of the now iconic picture with then New York City mayor Firello LaGuardia with the first class of black aviation navigation cadets who would go on to fly bombers. The group was heralded on this historic visit to New York and many flocked to see them in a parade, amazed at the prospect of black Americans flying aircraft in the war effort.

Sands was commissioned as an officer February of 1944. By June he completed bombardier training and was later assigned to the 477th Bombardier Group, becoming a member of a unique, select group of black navigators-bombardiers, the first of their kind in the military. 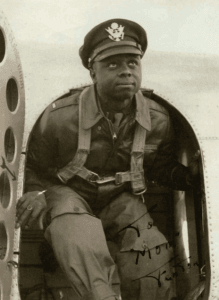 The war ended before the 477th was deployed overseas and Sands was honorably discharged in December of 1945 and shortly after married Dorothy Holder. The two moved to Africa in 1946, working as missionaries in Liberia to help re-open and revitalize the church-run Cuttington College. Sands would work on the school’s agricultural program, and during that time their two first children were born.

Sands and his family returned to the states so he could pursue a doctorate, and in 1954 he graduated from Cornell once again, this time with a PhD in agriculture. With their third child born during this time, the growing family once again returned to Africa where Sands served as Cuttington’s Vice President and Director of Agriculture. Later he would go on to take an assignment with his family in Nigeria. 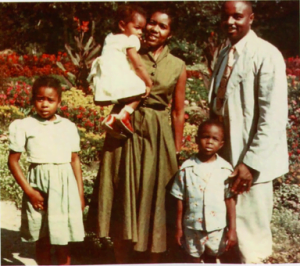 Dr. and Mrs. Sands with their children in Liberia.

Dr. and Mrs. Sands continued to explore and travel the world in their retirement, and joined several civic organizations. He was a member of the General “Chappie” James chapter of Tuskegee Airmen, Inc., mentoring young people through his inspirational military service and civilian career experience.

Sands passed away in 1998. His commitment to education and life’s work inspired all three of his children and seven grandchildren attended college. For a more detailed account of his life and to see photos and original documents from him time as a Tuskegee Airmen and working around the world, read “A Tuskegee Airman and Much More” by his son, Fenton Sands Jr.

We salute you, Dr. Sands, for your service and worthy contributions to make our world a better place. RISE ABOVE!