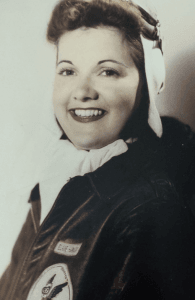 “It was a man’s world, but we (WASP) did something really great that was needed for the war effort … There is never a day that I don’t think how lucky I am to be a U.S. citizen and a Maryland resident … Carpé Diem!”

While at the University of Maryland, College Park, she became a private pilot through the Civilian Pilot Training Program. Harmon learned to fly Piper Cubs at College Park Airport as part of the Civil Aeronautics Authority program. She joined the Women Airforce Service Pilots against her mother’s wishes, who thought WASPs “were all just awful, just probably loose women”.

Over 25,000 women had applied to the program; Harmon was one of 1,830 accepted, and one of 1,074 who earned their wings. She completed six months of flight training and ground school, as well as at least 500 flight hours. After training at Avenger Field in 1944, she served at Nellis Air Force Base, flying trainers PT-17 and BT- 13, the AT-6 Texan, and the B-17 Flying Fortress. Harmon’s job was to fly with men who needed retraining in instrument flying — she said she served as a lookout, “to make sure that we didn’t run into any other airplanes”. Following the war, Harmon had a 25-year career as an independent real estate appraiser, working for Associated Appraisers in Beltsville, Maryland, until retiring in the early 1990s.

In 2009 she received a Congressional Gold Medal for her service as a pilot during World War II. As a WASP pilot, she has been accorded full military honors at Arlington National Cemetery. In 2016, Ms. Harmon was posthumously inducted into the Maryland Women’s Hall of Fame. 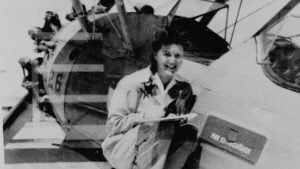 Harmon requested that her ashes be inurned at Arlington National Cemetery, with other WASP. However, former Army Secretary John McHugh ruled in March 2015 that WASP should not be buried at Arlington under then-current law. Harmon’s family spearheaded the effort to reverse the policy, and in early 2016 Senators and members of Congress from both parties introduced legislation to change the law. On May 20, 2016, President Obama signed a bipartisan, bicameral legislation into law that restored burial rights of the WASP, allowing inurnment at Arlington National Cemetery.

On September 7, 2016, four members of the CAF Capital Wing participated in a vintage WWII-era aircraft flyover during the inurnment ceremony for Second Lieutenant Elaine D. Harmon at Arlington National Cemetery.