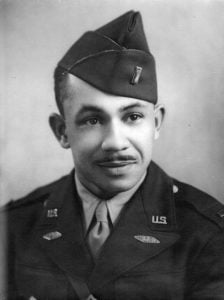 Among the family and friends laid to rest in the Alton, Illinois, town cemetery, war heroes and brothers George and Arnold Cisco hold a unique distinction, tucked away unnoticed for decades. They both served in World War II as part of the famed Tuskegee Airmen, our nation’s first black military pilots and their support personnel. After all these years, members of the Alton community have ensured that their service – and the mark it left on history – will be honored and remembered for future generations.

The obscure, flat gravestones that had marked their resting place do not give any indication of their important service as Tuskegee Airmen. The community came together to change that with a monument, which includes their images and that of the infamous fighter aircraft they flew in the war, educating and inspiring people about the legendary Tuskegee Airmen.

George and Arnold Cisco were born in 1918 and 1920 respectively and raised in Jerseyville with their parents, Roscoe and Flora Cisco, and younger brother Harlow. The rural town was just 20 miles north of Alton. Their father, Roscoe, worked as a cook and a janitor for a private family when George and Arnold were young but later established himself as a talented musician. He taught music lessons and played the organ at the Orpheum Theater on North State Street in Jerseyville for years, before, according to an old newspaper article, he was replaced by the Vitaphone.

George and Arnold attended their first eight grades of school at the old Jerseyville Grade School, which was located on what is now the playground of East Elementary located on Giddings Street.

The two brothers attended the Jersey Township High School, and George graduated with honors in 1935.

The following year, tragedy struck the Cisco family when, at age 45, Roscoe died as a result of appendicitis. He is buried in Oak Grove Cemetery. Arnold was finishing his junior in high school when his father died. He remained in school, served on the J staff his senior year, and then, like his older brother, graduated from high school with honors.

Both George and Arnold attended the University of Illinois. George earned a bachelor’s degree in languages and was fluent in French and German. He graduated in 1939, and that fall, both he and his young brother Harlow suffered an appendicitis attack. Unlike their father, both came through their surgeries fine.

Arnold graduated from U of I in 1941 with a bachelor’s degree and four years’ experience in the Reserve Officer Training Command (ROTC). After graduating, he took the examinations for entrance into the U.S. Air Corp and was accepted. He was sent to Tuskegee Institute for training.

George and Arnold were the only set of brothers from Jerseyville, IL to serve with the Tuskegee Airmen. Their much younger brother and only sibling, Harlow Burghardt Cisco, was also a pilot. George enlisted in the Army in 1942 and graduated from the armored force officer candidate school at Fort Knox, Kentucky, in January 1943 with the rank of Second Lieutenant. He served with the 761st Tank Battalion, a segregated unit, until March 1943, when he transferred to the Army Air Corps at Arnold’s urging. He earned his wings in May 1944.

Arnold earned his wings as a Tuskegee Airman and was assigned to the 99th Pursuit Squadron, eventually deployed to Ramitelli Air Base in Italy. There he flew the famous P-51 Mustang fighter in over 90 ground strafing and bomber escort missions, and earned the nickname Red Tail along with his fellow pilots for their tenacity, and the tails of their planes they painted red. His wartime service earned him the Distinguished Flying Cross, Air Medal with Oak Leaf Clusters, World War II Victory Medal, American Campaign Medal and the European–African–Middle Eastern Campaign Medal.

In another tragic turn of fate for the Cisco family, Arnold was tragically killed at the young age of 26 during military leave to visit his family. On May 19, 1946, the transport plane he was on hit power lines during a storm and crashed near Tuskegee, Alabama. He had been in Chicago to visit his wife, Hennie, who was pregnant at the time with their son Arnold Jr., and was on his way back to Tuskegee where he was to be promoted to the rank of Major before returning to fight overseas.

See the Virtual Museum post featuring the monument set to honor resting place of brothers who were Tuskegee Airmen Pilots.