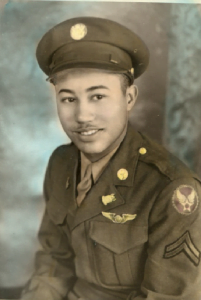 Harvey was born on Hammond Street in Boston’s South End in 1926 to Oswald Sanford and Georgianna (Jones) Sanford.  He was an only child and was lovingly called “Sonny” by his parents.  As a boy he spent summers with his mother’s family in Annapolis, MD and is a connoisseur of crab cakes.   He also went with his father each month to visit his Mashpee Wampanoag family on the Cape.  His mother said that his favorite toy at a very early age was an airplane he made from popsicle sticks and his love of airplanes has continued through his lifetime.

Harvey attended Boston Trade High School for Boys in the aeronautics program and played the fife in the school’s fife & drum corps.  He was one of four students who completed his high school credits one year early, and the four were hired by what was then known at East Boston Airport to work as aircraft mechanics for their senior year. The airport was already familiar to him, as he had visited many times as a boy with his father to watch the trucks bring landfill to dump into the harbor to extend the runways.  A year after graduation, in 1945, he was drafted and “…shipped to Tuskegee,” assigned to Squadron A, 385th Army Air Force Base Unit.

He vividly remembers his train ride south to Chehaw Station, Alabama.  Black passengers could sit anywhere when they got on the train in Boston but once they crossed the Mason-Dixon line in Washington, DC, they all had to get off of the train and move to the front car of the train – the one closest to the smoke and dust from the coal engine.

Once at Tuskegee Army Air Field/Moton Field, they were lined up for jobs and Ralph White, who was from Boston and had been there for several months, recognized him and asked why he was there.  Harvey said, “They told us we were going to build airplanes,” to which Ralph replied, “Already built.”  Harvey explained what he’d been doing at East Boston Airport and Ralph took Harvey and his files to his boss, Major Boyd, second in command.  Major Boyd said, “You’re just what we need.  You’ll work for me and the base commander.  You will have no other duties.”  He then told Ralph to get Harvey a room.  Harvey says, “I didn’t have stripe the first but I was with all non-coms.”

Harvey was eventually promoted to the rank of sergeant.  His job was to inspect all aircraft and engines after every 25 hours of flying, on the ground and during test flights with the pilots.  Once per month he would fly Major Boyd and the base commander, Major Parrish, to Washington, DC for meetings and he would spend time with family in Annapolis.  When he would return the next morning, his plane would have been moved and parked in a far corner of the air base, away from all of the “white” planes.

Harvey received an honorable discharge in October of 1946 and went to work at Fort Devens, MA as a National Guard aircraft mechanic. During the Korean Conflict, from 1950-52 he did light aviation aircraft maintenance with the 272nd Mass. National Guard Field Artillery, first in Wisconsin where it was so cold that guns didn’t fire, children got frostbite while sleeping, and water inside the barracks froze, and then in Schwäbisch Gmünd, Germany. Part of his role during this time was to fly along the German border with Chuck Lee, also a Boston native, doing border patrol.  He also served with Billy and “Lafe” Bingham, whom he knew from home.

On his return home, his job was airforce research and development at Hanscom Air Base, including supervising the installation of test equipment.  He was authorized to “run up” supersonic aircraft including the F101, F102, and F106, and other aircraft such as the T-39 and the KC-135.

From 1974 until his retirement in 1984 he worked as an airworthiness inspector for the Federal Aviation Administration (FAA) at Logan Airport, specializing in accident investigation and the inspection of airline aircraft, and then as an FAA consultant. 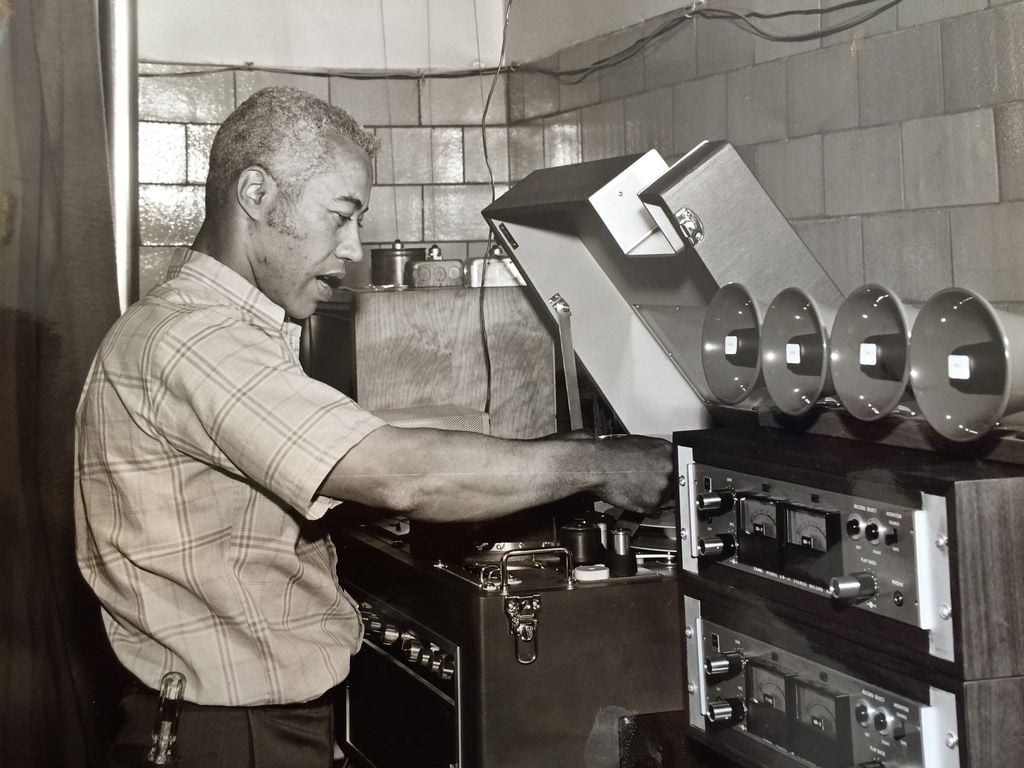 After his experience with the Tuskegee Airmen, Harvey Sanford working as a mechanic at Hanscom Air Force Base

Harvey’s hobbies before retirement were building an extensive model railroad in his basement and one for his granddaughters, and building and flying radio control airplanes.  Since retirement, Harvey has volunteered every Saturday with the Collings Foundation and with MayoCraft on aircraft restoration and repair.  Aircraft have included a B-17, B-24, B-25, B-6, PT-17, T-6, Wright B-Flyer, two Piper Cubs, a 1911 Bleriot, and a Waco Cabin.  The MayoCraft volunteers also built an airworthy P-26D from scratch.  While with the Collings Foundation, Harvey and Ret. Col. John Roach flew the B-17 and B-25 to air shows around the country and took the public up for rides.

As an Original Tuskegee Airman, Harvey was a member of the New England Chapter, Tuskegee Airmen, Inc.  In 1996 he was recognized as “the youngest African American maintenance inspector to take part in the advanced training group at the Tuskegee Army/Air Field” and in 2007 traveled to Washington DC as one of 300 recipients of the Congressional Gold Medal, a prestigious award given by Congress for their service.  He was also awarded an Honorary Citizen’s Award at the 73rd annual convention of the NAACP in Boston in 1982.  As a member of the New England TAI chapter, he received many certificates and accolades in appreciation of his and their service and their many presentations around New England to educate young people about the Tuskegee Airmen.

In 1950, he married Alice E. Taylor, whom he had met when they were neighbors in the South End.

“He met my mother when they were 12 and I don’t think they ever dated anybody else,” said their daughter, Dr. Judith Sanford-Harris, a former vice president for student affairs at Bunker Hill Community College who is now a student development counselor for the Boston Public Schools.

“Daddy would sit out on her front steps after he finished his homework and would wait for her to finish and come outside,” she said. “My uncles would tease him and his other friends would tease him, but he didn’t care.”

Mrs. Sanford, who was one of the first two African-American students admitted to Wheaton College, formerly was a longtime teacher and school psychologist for the Boston Public Schools.

In retirement, Mr. Sanford was the principal baby-sitter for his two granddaughters, Stacey and Stephanie.

“He would do anything for them. He was happiest when he was holding them,” Mr. Sanford’s daughter said. “He loved babies, any babies. My mother used to say he was the only one who could get my colicky cousin to go to sleep.”

She added that her father “was happy I got married, but he was more interested in grandchildren, so when my daughters were born, he was in seventh heaven.”