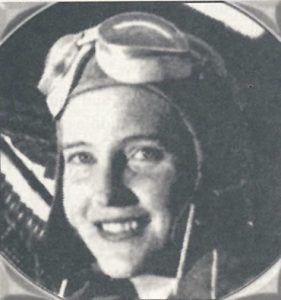 Not many boys growing up in the midst of World War !! could boast that their mother was a fighter-pilot, but 12-year-old Gerry and ten-year-old Bill Clark could and did – and are still proud of it!

Born December 27, 1909, Helen Mary (Goodman) Clark began flying in 1934, owned her own plan – a Monocoupe – and had logged 629 hours when she reported to New Castle, Delaware on September 12, 1942 and became the fifth Original. When Betty Gilles took over as squadron C.O. on January 1, 1943, Helen Mary became her executive officer because of her superb people and management skills.

The wife of W. Gerould Clark Jr., a well-known polo player and real estate broker, Helen Mary was a slender, attractive blonde with delicate features. She had known Nancy Love before the war and helped her search the C.A.A. files for women pilots holding commercial licenses. In order to join the WAFS, Helen Mary negotiated a release from the Civil Air Patrol, for whom she had been flying coastal patrol in the early days of the war. C.A.P. pilots donated their time and their airplanes to help protect the American shoreline.

In May 1943, Helen Mary became the second woman to check out in the P-47 Thunderbolt and by July 28 she had logged 21.5 hours in the big pursuit. From then on, she ferried them regularly from the Republic Aviation factory in Farmingdale, New York. She eventually spent time in the spring of 1944 in Kansas City ferrying B-25s and, like all the New Castle WASP, did regular TDY ay the Republic factory. Then in September 1944, she was sent to command the small detachment of WASP stationed at Republic’s modification center in Evansville, Indiana. She served there until deactivation in December.

Helen Mary did not go to pursuit school, but was sent to Long Beach in order to check out in both the P-51 and the P-38. In her WAFS/WASP career, she ferried pursuits, medium attack bombers, and heavy transports. She also attended Officer Training School in Orlando. When the war was over Helen Mary did not just go home and settle back into domestic life. When the new Air Force offered Reserve commission to the WASP in 1948, she accepted and was assigned the rank of Major. The September 1954 issue of Air Reservist magazine featured “Hold in Reserve,” an article by Staff Sergeant M.L. Prosser that was all about Major Helen Mary Clark, “M-day chief of the Military Transport Service’s Ferrying Division.” Once a month, the piece pointed out, Major Clark “dons her smart Reserve WAF major’s uniform and treks south from her Englewood, New Jersey home to MATS Headquarters at Andrews Air Force Base in Maryland. For a full day, she tackles man-sized tasks of the important Ferrying Division. As a mobilization assignee, Major Clark is tabbed for an important role should war be forced upon us.”

Both W. Gerould Clark III and William Goodman Clark learned to fly after the war, taught by AF Reservist 2nd Lieutenant and former WASP (44-6) Carolyn Cullen, who managed the FBO operation at the airstrip that was part of Clark’s property in Martha’s Vineyard. The Clarks owned what Gerry terms a “cow-to-customer farm” on the Vineyard. In fact, he recalls delivering milk to earn money for his flying lessons. Gerry and Bill went on to graduate from Cornell University and the Air Force ROTC program there and then became Air Force pilots in the 1950s. Helen Mary got to fly with Gerry once when she visited him in Japan. “I was stationed at Osaka. Mom flew over and back with me on a short weather mission. She rode in the jump seat of the B-26 I was flying.”

The Clarks’ Vineyard home, next door to the Loves’ property, was a summertime reunion haven for the WAFS. “We never knew who would pop in.” says Gerry.

Sadly, fire destroyed the Clarks’ home in Tuxedo Park, New Jersey, and, with it, most of Helen Mary’s WAFS memorabilia. She died of congestive heart failure on April 22, 1979 – Gerry’s 49th birthday.