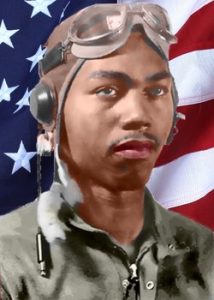 Prior to John becoming a Documented Original Tuskegee Airmen (DOTA), he attended Wilberforce University and the University of Cincinnati. This gave him the two years of college needed to become an aviation cadet and not be drafted. Moton Field was the only primary flight facility for African-American pilot candidates in the U.S. Army Air Corps (Army Air Forces) during World War II. In the military training program, the students were trained as officers and qualified as military pilots in military training aircraft. They were then ready to learn to fly combat aircraft.  After they completed training in operational aircraft, typically at bases beyond Tuskegee, they were ready for combat duty overseas. John went on to be 1 of 27 in a class of 60 who graduated on 28 July 1943 with Class 43-G-SE and was assigned to the 301st Fighter Squadron. On that date, he received his silver wings and was commissioned as a 2nd Lt in the United States Army Air Force.  He went on to become one of 450 pilots selected to fly long-distance combat missions while based at Ramitelli AFB, Italy.

During his military career, he flew over 130 missions before returning to the United States as a 1st Lt on 25 January 1945. Following his career as a Combat Pilot, he became one of Tuskegee’s 1st black flight instructors for training on multi-engine aircraft. This training prepared returning pilots to consider becoming commercial airlines pilots. 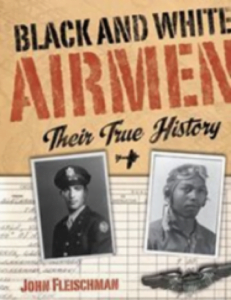 On 16 October 2003, John Leahr and Herbert Heilbrun were presented with the Harvard Foundation’s Humanitarian Award for individuals 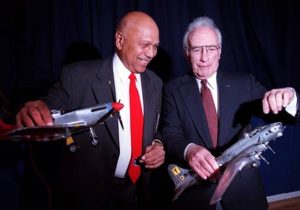 whose works and deeds have served to improve the quality of our lives and have inspired us to greater heights. You can read more on these two ‘best’ friends in a book written about their youth, military experiences and ‘unique’ friendship in the book, “Black and White Airmen: Their True Story” published by John Fleischman in 2007. In addition to numerous other awards, on 29 March 2007, 1st Lt Leahr was collectively awarded the Congressional Gold Medal in recognition of the Tuskegee Airmen’s unique military record by then President George Walker Bush. Their ‘successful’ record inspired revolutionary reform in the United States Armed Forces.

1st Lt Leahr began his civilian life in early 1946.  He was employed for 9 years at General Electric Aircraft Engines in Evendale, OH. He was the first black to pass Ohio’s Financial and Securities license exam and the first to become Vice President of an OH brokerage firm. Leading up to his retirement, he also worked 10 years as an Administrator for the Cincinnati Gas and Electric Company.

The Freeman Field Mutiny occurred during April 5-6 of 1945. 2nd Lt Roger Terry was court-martialed for shoving a superior officer, convicted, fined, reduced in rank and given a dishonorable discharge. It took 50-years for the Air Force to admit that its treatment of 2nd Lt Terry and other officers of the 477th Bombardment Group was wrong. Former Cincinnati Mayor Ted Berry was the Chief Defense Attorney for those Airmen, who were court-martialed. On 2 August 1995, 2nd Lt Terry received a full pardon for his court martial conviction. His rank was restored to him, as was the fine he had paid. In 1996, while serving as President of The Greater Cincinnati Chapter of Tuskegee Airmen (GCCTAI), 1st Lt John H. Leahr was instrumental in inviting 2nd Lt Roger Terry to Cincinnati to present ex-Mayor Ted Berry with a ‘special’ award.

If you had told John Leahr during his life that he was a hero, he probably would have shrugged it off.

“He never really looked at himself as a hero,” his son, Art Leahr, said. “He felt like he did what he needed to do. He wanted to fly. He and the other guys went in and did the job. They didn’t join the service to become heroes.”

Don’t forget to link to the Red Tail Virtual Museum to the Leahr/Heilbrun Memorial Bench and the sculpture by Jarret Hawkins, honoring the legacy of Tuskegee Airman Lr. John Leahr.