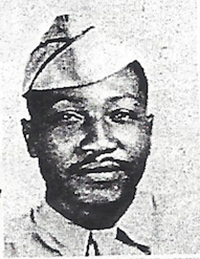 This text is taken from the Honorable Discharge document sent to us from Joseph W. Sparks

WHEREAS, He went on training flights as a radio operator with First Lieutenant Daniel James Jr. as a member of the 617th Bombardment Squadron at Godman Field, Kentucky, in 1944; Lieutenant James went on to become the first African-American four-star general; he also served with James Y. Carter who went on to serve in the Illinois General Assembly and was Vehicle Commissioner for the City of Chicago, Winston A. Adkins, a police sergeant at 51st and Wentworth in Chicago, A.A. Rayner, a former Chicago alderman and funeral director, and Charles C. Diggs, who became a U.S. Congressman from Michigan; and

WHEREAS, As a radio operator mechanic, Sergeant Sparks operated airborne transmitting and receiving equipment; he sent and received messages using Morse code; he performed in-flight maintenance on equipment and tune adjusted his own equipment; he operated at a rate of 20 words per minute; he also had two 50-caliber machine guns to operate, one on each side of the B-25 bomber; and

WHEREAS, The squadron was initially named the 477th Bombardment Group; the name was changed in June of 1945 to the 477th Composite Group, when the leadership of the group was handed over to the General B.O. Davis, Jr. It was the first and only U.S. Army installation within the continental U.S. to be commanded and staffed completely be African-American personnel; and

WHEREAS, Mr. Sparks went on to work with the Chicago Transit Authority and was honored for 31 years of public service as a bus driver and for his volunteer work in the Englewood Community as Chairman of the 7th Police District Youth Corps; he drove streetcar #7213 Chicago’s last streetcar during the mid-1950’s; therefore, be it

RESOLVED BY THE HOUSE OF REPRESENTATIVES OF THE NINETY-FOURTH GENERAL ASSEMBLY OF THE STATE OF ILLINOIS, that we honor Joseph W. Sparks for his service as a member of the 477th Composite Group during World War II, for his many years of public and community service, and for his efforts to educate Americans on the 477th Composite Group; and be it further

RESOLVED, That a suitable copy of this resolution be presented to Mr. Sparks as an expression of our sincerest respect and esteem.

Adopted by the House of Representatives on April 5, 2005.

Signed by Michael J. Madigan, Speaker of the House

In 2007, the 477th Composite Group became the 477th Fighter Group, bringing with it the legacy of Tuskegee Airmen to Alaska.

Visit the Virtual Museum to see other papers belonging to Joseph Sparks!