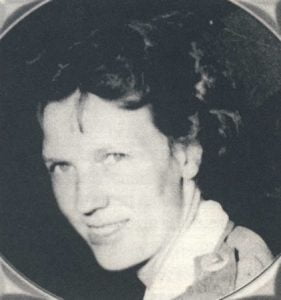 Lenore McElroy’s flying career began in 1930 with a ride in a Ford Tri-Motor that took her over Niagara Falls. Too frightened by the experience to even look out the window, she decided to do something about it. To come to grips with her fear, she started spending time at the Indianapolis Municipal Airport. Eventually pilot and friend Elvan Tarkington persuaded her to take a ride in his Rearwin. He assured her that she was flying when all the time he was operating the aircraft with his knees. That accomplished what they wanted and she decided to learn how to fly. She soloed one week later – as promised by Mr. Tarkington on May 30, 1931. She obtained all of her aviation certificates at Indianapolis and got her ground school and flight instructor ratings as well.

According to her daughter, Sherrill Arnet, “My mother learned to fly before meeting my step-father, Clarence McElroy. They were married in 1935.” They both taught CPT for university students in Parkersburg, West Virginia, and then flew for Hartung in Detroit.

When she interviewed with Nancy Love at Romulus, Lenore had 3,500 hours and was given a check ride in an AT-6. Clarence, was by then, a ferry pilot for the 3rd Ferrying Group and the family was living in Ypsilanti, Michigan. Lenore had not been willing to leave her three children to go to Wilmington because her husband, as a ferry pilot, frequently had to be gone overnight, But when the WAFS came to Romulus, she was there with her ratings and her flying ability and became number twenty-eight, the last of the Originals. She was appointed Operations Officer under squadron leader Barbara Donahue in the summer of 1943 and served in that capacity until deactivation.

Lenore was the only one of the Originals who did not start off in Wilmington.

Lenore went back to instructing, and after the war, taught primarily under the G.I. Bill. Sometime after that, she and Clarence were divorced and, in 1950m Lenore took advantage of the Air Force’s offer – based on her WASP service – and joined with the rank of captain. She served three years at Kelly AFB in San Antonio, then was transferred to West Palm Beach, Florida. In 1955, she was sent to Tokyo with the First Weather Wing and served until 1959. In 1967 she received documentation what she had been transferred to Major-Retired-Reserve.

Following her AF discharge in 1959, she entered Riverside Baptist College, Riverside, California, and worked on her Bachelor of Science degree with a secondary in education. She taught sixth grade at Winton Elementary School in Winton, California, until her retirement in 1973. She flew in at least one Powder Puff Derby and was a member of the Ninety-Nines