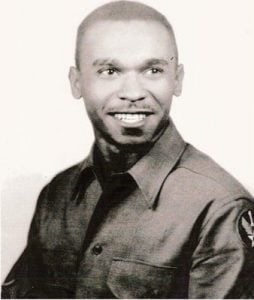 Flight Chief of Flight A in the 617th Bombardment Squadron

“Our ‘excellence’ is proof that those who believed in Black inferiority were fools.”~SSgt/Flight Chief Leslie Edwards, Jr.

Leslie Edwards was born Aug. 9, 1924, in Memphis, Tennessee. He was the youngest of three children, his father was bellhop and his mother looked after the children. The family moved from Memphis to Cincinnati in 1925. Before dropping out of high school in 1938, he attended Harriet Beecher Stowe School in Cincinnati, Ohio. He worked at several jobs before settling at Khan’s Packinghouse in 1941. He married Anne Mae Green in 1943.

He was drafted into the Army Air Corp in 1943. His basic training was at Sheppard Field, Texas. After basic, he was train on aircraft engine mechanics for medium bombers. Following training he was assigned to Selfridge Field outside Detroit where he worked on bombers belonging to the 477th Bombardment Group Medium. There were four Tuskegee Airmen bomber squadrons during WWII – the 616th, 617th, 618th and 619th, that were organized under the 477th Bombardment Group they were slated for combat in the Pacific Theater but WWII ended before their deployment. 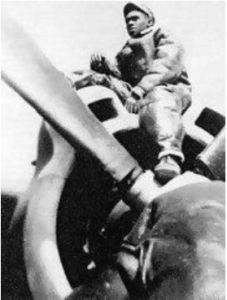 Edwards was 18 when he was drafted in 1943. He became a flight chief of the B-25 medium range bombers

In 1944, Leslie Edwards was reassigned to Godman Field outside Louisville, KY. There he was made the Flight Chief of Flight A of the 617 Bombardment Squadron responsible for maintaining the five B-25 bombers assigned to the squadron. In 1945, he was reassigned to Freeman Field in Seymour Indiana. Also, in 1945 the 477th was ordered back to Godman. The returning Tuskegee Airmen fighter squadrons and group were combined with the bomber squadrons and group to become the 477th Composite Group with its headquarters at Godman Field in Kentucky SSgt Leslie Edwards Jr. was discharged in 1945.

The 477th never deployed overseas for combat partly because it was activated late in the war; partly because a bombardment group took longer to train than a fighter group; and partly because it was transferred from base to base because of racial trouble. While the bombers units did not participate in combat overseas members of the unit were part of an event known as the “Freeman Field Mutiny,” when in April 1945 black officers attempted to enter a segregated officers club. A total of 120 black officers of the 477th Bombardment Group were arrested at one time or another during the “Freeman Field Mutiny.” Segregated facilities were contrary to existing Army Air Corp Regulations. It has been said that this act of civil disobedience was instrumental in President Truman issuing Executive Order 9981 in July 1948 which directed the desegregation of the U.S. military.

After WWII both Leslie and his wife completed high school and he received a bachelor’s degree in Commerce from Solomon P. Chase College in Cincinnati, Ohio in 1961. Leslie was initially denied returning to his job at Khan’s Packinghouse, but the union supported him and he regained his position where he stayed until 1964, when he left to become a federal meat inspection in Cincinnati. Leslie worked as the Supervisor of Meat Inspectors for the Southwest Area of Ohio from 1970 to 1986. From 1987 to 1997 he was a Register Sanitarian for the State of Ohio responsible for assuring that meat packing facilities were in compliance with state codes.

Below is a brief summary of some of his key personal experiences at major Army Air Fields and with major leaders involved in the Tuskegee Experience during his time of service.

General Daniel ‘Chappie’ James, Jr. – After graduating from Tuskegee University, James completed the government’s Civilian Pilot Training Program and he became a civilian instructor for the Tuskegee Army Air Corps where he trained pilots for the all-black 99th Pursuit Squadron. It was there James and Edwards teamed up to check out factory-delivered airplanes for safety issues and military acceptance. Col James, known as ‘Blackman’, and Col Robin Olds, known as ‘Robin’, of the 8th Tactical Fighter Wing (TFW), were a legendary team in Viet Nam that had the highest number of MIG-21 kills. On September 1, 1975, Col James became the first African American to be promoted to a Four Star General.  After that appointment, he had dual responsibilities for operational command of all U.S. and Canadian strategic aerospace defense forces.

Brigadier General Noel F. Parrish – Parrish was promoted to the position of Tuskegee Army Air Field Commander in 1942 until the end of WWII. Gen Parrish made it obvious to a young Edwards that he believed blacks could perform well in both leadership and combat roles. Parrish wrote a thesis advocating desegregation that influenced President Harry S. Truman in his decision to desegregate the US military.

Sheppard Air Force Base, TX – The base received its first class of 22 Army Air Corps aviation mechanics in October 1941. Edwards was in the graduating class of February 1942.

Selfridge Air National Guard Base, MI –In January 1944, Selfridge housed the 477th Bombardment Group, training to fly North American B-25 Mitchell bombers.  In May 1944, following a reprimand of the Commander and his demotion to Captain for segregating blacks, Edwards and other personnel of the 477th were transferred to Godman Field, KY.

Godman Army Airfield, KY – While the 477th Bombardment Group trained for B-25 combat orders, Edwards was promoted to SSgt/Flight Chief. It was here that he was handpicked by Benjamin O. Davis, Jr. as part of the team going to Myrtle Beach, SC. Because of their excellent safety record of keeping planes mission-ready, they were assigned the task of preparing planes for night flight operations and for flying over oceans.

Freeman Army Airfield, IN – The Freeman Field Mutiny occurred on April 5 and 6, 1945. The 477th already suffered from morale problems stemming from strict social segregation of black and white officers at Selfridge Field. Col Robert Selway created two separate officer clubs, essentially to segregate the black and white officers. Over a two-day period, small groups of black officers attempted to enter the white officers club multiple times and were met with resistance and arrests. Edwards was a witness to this incident. Afterwards, the entire 477th Bombardment Group was returned to Godman Field.

General Benjamin O. Davis, Jr. – Davis received orders to take over command of Godman Field and the all-black 477th Bombardment Group, which included Edwards, from Col Selway in July 1945 and they were to be prepared for combat. However, WWII ended before they could be deployed. Davis moved the 477th to Lockbourne Army Air Base in Ohio where they became known as the 332nd Fighter Wing.

Lockbourne Army Air Base, OH – Davis not only commanded their flying unit, but also served as Base Commander. On December 9, 1998, President Bill Clinton advanced Lt General Davis to a ‘FULL’ General awarding him Four Stars.

In a WWII magazine, the question was asked, “Who will keep history alive when our WWII veterans are all gone?” Edwards, a fine, unassuming man, worked very hard to keep history correct and alive and volunteers much of his time to answer this question. Edwards, our unsung hero, continued on in this valuable role educating youth, civic groups and the general public so that they may carry forward this very important part of American history, and there are many chapters of Tuskegee Airmen, Inc. all over the United States that labor diligently to carry out these goals alongside these heroes.

Visit our Virtual Museum to see his special connection to the Memorial bench in honor of Tuskegee Airman John Leahr and B-17 pilot Herbert Heilbrun.