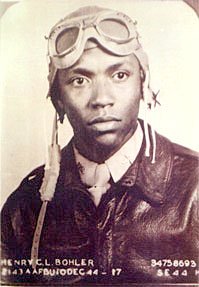 Born in Augusta, Georgia in 1925, Bohler would spend much of his life being told what he couldn’t do. He dreamed of flying one day, but was told he couldn’t become a pilot because he was black. Instead of accepting that decision, he enlisted in the Army Air Forces at the age of 17. At enlistment, he weighed 109 pounds, which was one pound under the minimum weight for airmen; through persuasion, he was able to join anyway.

Bohler would train at the Tuskegee Army Air Field in Alabama, the home base of the Tuskegee Airmen, the first African-American air corps in the United States. He learned to fly the P-51 Mustang fighter, and earned his wings in 1944. At that point, the air forces did not need any more pilots. Bohler would nonetheless remain with the air forces until 1947, earning the rank of second lieutenant. He then attended and graduated from Hampton University in Hampton, Virginia.

Returning to Augusta, he met and married his wife, the future Clifford Marie Bohler, at an ice cream shop her aunt owned. “He came in, and the rest is history,” Mrs. Bohler would later recount. She would add how persistent he was, and that “he wouldn’t take no for an answer.”

Bohler’s persistence would be challenged again after he and his family moved to Tampa, Florida in 1950. This time, he was told that he could not own his own business. His persistence again paid off as he became Tampa’s first African-American licensed electrician and operated his own business enterprise, rising to become one of Tampa’s first African American Millionaires.

In 1960, Bohler, his wife and their three children went to the Lowry Park Zoo in Tampa. The family was denied entry to the zoo because of their race. Bohler sued the city for discrimination. During the two years it took to hear the case, Bohler was routinely harassed by city police who would pull his car over and demand to check his driver’s license. On the day he was ordered to appear in federal court, he was pulled over five times.

As before, Bohler ultimately prevailed, with the result being a 1962 federal order requiring Tampa to integrate its public recreation facilities.

Throughout his life, Bohler never forgot his heritage. He and other former Tuskegee Airmen would often speak to school groups. He would attend yearly reunions of the Airmen, flying his own Piper Archer airplane to the events.