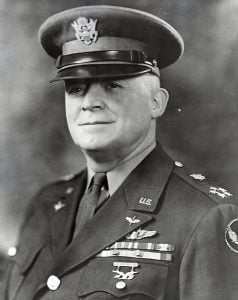 General ‘Hap’ Arnold, one of the greatest American military figures and Air Force proponents in the history of America, was born in Gladwyn, Pennsylvania on June 25, 1886. Following graduation from the United States Military Academy, he was appointed a Second Lieutenant of Infantry on 14 June, 1907.

In 1911 he entered aviation and became a flyer. He was detailed to the Signal Corps in April, 1911, piloting the Wright bi-plane. He was one of the first flyers taught by the Wright Brothers.

In June, 1912, this pioneering pilot, Hap Arnold, established a new altitude record when he piloted a Brugree-Wright airplane to a height of 6,540 feet. He participated in the Regular Army and National Guard movements in the States of New York and Connecticut and established several aeronautical records. On October 9, 1942, he won the first Mackay Trophy to be awarded for his flight demonstrations.

He progressed rapidly through the ranks, and by 11 February 1935 he had received the temporary rank of Brigadier General, and on September 29, 1938 he was named Chief of Staff of the Air Corps. With Hitler now marching across Europe, he became concerned with America‘s lack of combat aircraft. He discussed the US air power vs the German air power with President Roosevelt, and a decision was made to build 11,000 new combat aircraft. Gen. Arnold then commanded that civilian flying schools be established to train Air Corps pilots. 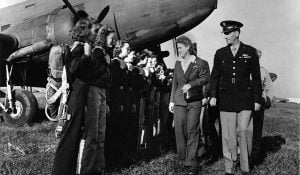 During the early months of 1942, General Arnold, encountering a severe shortage of male pilots due to heavy losses of combat pilots, approved a plan, submitted by Jacqueline Cochran, to train young women pilots to fly military aircraft within the U.S. to relieve the male pilots for combat duty. On 14 Sept 1942, the Womens Flying Training Detachment was established at the Houston Municipal Airport, with Jacqueline Cochran as its Director. Three months later, because of a lack of military training facilities and housing in Houston, Gen. Arnold approved moving the training program to Avenger Field in Sweetwater, Texas. 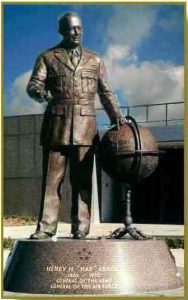 In May of 1943, General Hap Arnold authorized Jacqueline Cochran to see to developing a suitable uniform for the women pilots. He wants it to be ’blue‘. In concurrence with the new Santiago blue WASP uniforms, on Aug 20, General Arnold, CG/AAF issued orders that ’The acronym for all AAF women pilots will be WASP (Women Airforce Service Pilots) period.‘

March 22, 1944 General Arnold appeared before the House Military Affairs Committee to request commissions for the WASP. He leaves immediately for Europe to participate in the D-Day invasion, and the bill fails to pass.

June 26, 1944, following the defeat of the bill to include the WASP as officers in the Army Air Force, General Arnold orders that the WASP be discontinued in December, 1944.

General Arnold retired from the service on 30 June 1946 with the ratings of Command Pilot and Combat Observer. His many accomplishments, of both personal and national significance, gained him the distinction of becoming the first five-star General of the United States Air Force on 7 May 1949, by an act of Congress.

General Arnold had but one theme: ’It‘s got to be done and done quickly, so let’s get it done.‘ Let not there be any doubt of the WASP’ pride in General Henry ‘Hap’ Arnold, the man who, among his many accomplishments, authorized the creation and naming of the WASP – a man who ‘had the imagination to see success and the confidence to create it’.