In all, 992 men completed the Tuskegee advanced flight training program and earned their wings. As pilots graduated, the majority would be assigned to one of four fighter squadrons: the 99th, 100th, 301st and 302nd. These four squadrons would become part of the 332nd Fighter Group. A total of 355 pilots were sent to the warfront in North Africa and Europe (the Mediterranean Theater) as fighter pilots. Sadly, 80 gave their lives and 31 became prisoners of war.

Read on: The Freeman Field Mutiny and Tuskegee Airmen Beyond Alabama

The first military flying unit of the Tuskegee Airmen was the 99th Pursuit Squadron but was shortly renamed the 99th Fighter Squadron. In March of 1941 it was activated at Chanute Field in Illinois without any pilots as there were no graduates from Tuskegee at that point to populate the squadron. It received its first pilots in March of 1942 at Tuskegee Army Air Field, but it would be several more months before enough pilots were added to be considered an operational flying unit. Col Benjamin O. Davis Jr., one of the first graduates of flight training at Tuskegee, would go on to become the squadron’s most famous commander.

The patches of Tuskegee Airmen units of World War II

The 99th Fighter Squadron was first sent to North Africa for combat duty in April 1943. The transition from training to actual combat wasn’t always smooth given the racial policies within the military, as well as the personal prejudices of many enlisted personnel and line officers. However, the Airmen overcame the obstacles posed by racism through hard work and commitment to their role as military aviators. After serving in North Africa, the 99th moved to Sicily and the mainland of Italy to support Allied campaigns there. It was later assigned to the 332nd Fighter Group, which had three other squadrons, and together they later took part in raids on Germany and other parts of central Europe.

Although the Airmen flew courageously and well, it was as bomber escorts on missions deep into Germany and surrounding areas that they really made a name for themselves. They gained a widespread reputation for staying with the bombers and successfully protecting them during their dangerous missions. Other fighter squadrons were known to be more interested in going after enemy aircraft for an aerial victory, but the Tuskegee Airmen followed their strict orders to stay with the bombers, and gained notoriety for their success at protecting these aircraft from being shot down.

Like all fighter groups, the 332nd Fighter Group flew aircraft with distinctive paint schemes to assist with identifying friend from foe, and the 332nd chose to paint their tails bright red. It wasn’t long before the bomber pilots were requesting the Tuskegee-trained “Red Tail Angels” to fly escort for them. The Tuskegee Airmen flew a number of different fighter aircraft, but they are most closely associated with the fast and powerful P-51 Mustang.

Some of the pilots that graduated from the Tuskegee program were trained to fly bomber aircraft. Other important bomber crew positions and support personnel were also trained, but at other locations. Those prepared to fly and support the bombers were assigned to one of the four bomber squadrons of the 477th Bombardment Group at Selfridge Field near Detroit, Michigan, activated in early March 1945. However, the war ended before the squadrons were sent overseas. The officers of the 477th play an important role in history nonetheless. In April of 1945, many of the Tuskegee Airmen of this group attempted to integrate a white officers club and were arrested in what came to be called the Freeman Field Mutiny, asserting their rights to be treated with the same dignity as their white counterparts. 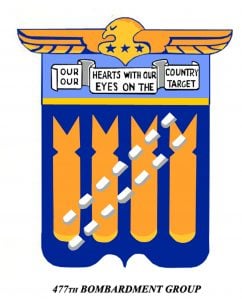 Some members of the Tuskegee Airmen were assigned to the 477th Medium Bombardment Group, which trained at Selfridge Field near Detroit, Michigan, to fly B-25 Mitchell medium bombers. It was never sent overseas. While the members of the fighter groups experienced varying degrees of both racism and acceptance in the Mediterranean, the bomber group faced the full brunt of racism that existed in the United States at that time. Their officers were barred from the white officers’ base club, a violation of Army regulations. Tensions over their treatment caused the group to be transferred first to Kentucky and then to Indiana, where resentment over discrimination finally boiled over. On the night of April 5, 1945, nineteen black officers attempted to enter the officers’ club there, in violation of provost marshal’s orders, in has been called the Freeman Field Mutiny. Soon, seventeen more joined them, and all 36 were arrested. Twenty-one black officers attempting to enter the club the following day were also arrested. All but three were released following an investigation; those three were court-martialed for pushing the provost marshal, but only one, Lieutenant Roger C. Terry was convicted and fined $150. (The decision against Terry was set aside in 1995.)

The 616th, 617th, 618th and 619th Bombardment Squadrons were organized under the 477th Bombardment Group. They were slated for combat in the Pacific Theater but WWII ended before their deployment.