With World War II breaking out across the globe, women aviators in America who were eager to serve their country proposed a radical idea – that women could fly modern American combat aircraft in support of the war effort. Military leaders suggested that women lacked the strength and agility to fly such aircraft. However, these women sought to overcome these perceptions and prove they could assist their country in a time of great national need. They courageously fought for the right to serve their country as civilian volunteers without one single benefit from the military! 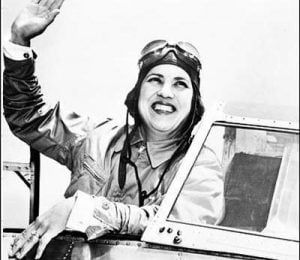 Talented and charismatic female pilots Jackie Cochran and Nancy Harkness Love both petitioned the U.S. Army Air Corps to establish female flying units, and both were turned down. Even the support of First Lady Eleanor Roosevelt could not change the opinion of the military. But the attacks on Pearl Harbor and our country’s official entry into World War II created a desperate need for pilots overseas. Facing a dire shortage of pilots on the home front, the army reluctantly decided to allow women an opportunity to prove that they were capable pilots.

A new female workforce was created to produce airplanes that in turn, could not be transported to the frontlines because the available male pilots had been ordered to combat overseas. This great need opened the door for women and the formation of the first two military women’s flying units – The Women’s Auxiliary Ferrying Squadron (WAFS) and the Women’s Flying Training Detachment (WFTD). These units were later combined to create the Women Airforce Service Pilots, or WASP.

More than 25,000 women applied; just 1,074 women earned the coveted silver wings, becoming official members of the WASP program. The WASP training classes lasted 4 months. The women were required to pay for some of their own expenses and to make their own uniforms. For the early classes there wasn’t even a fire truck on field in case of an accident. Despite these conditions, 1,074 women would earn their silver wings, becoming full-fledged WASP.

In order to relieve as many male pilots as possible, the WASP were scattered around the United States to perform many essential tasks and flying more than 80 types of aircraft. They towed targets in live fire exercises, ferried more than 12,650 aircraft for more than sixty million miles, and even tested rocket and jet powered aircraft, as well as drones. 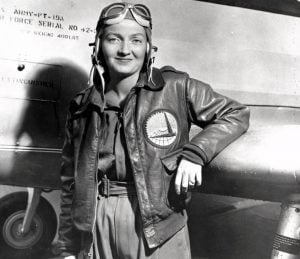 From the WASP unit of 1,074 women, 38 lost their lives in accidents while performing a service to their country, 11 in training and 27 during missions. As a final testament to the era’s absurd attitudes towards women, the families of these 38 women received a bill for the transport of the bodies of the deceased. The WASP casualties could not be buried with military honors, nor with an American flag upon their casket.

Even though these women had proven themselves extremely capable, the program was shut down in 1944 amid a hail of controversy about the cost of training women pilots. With the conclusion of the War, the program was classified, and its records sealed. Having been left out of many history books and World War II remembrances, it would be 35 years before the remarkable stories of the WASP could be told.

Then, in the mid-1970s, the Navy announced to the media that, for the first time in history, women would be permitted to fly military planes. The announcement reverberated among the WASP, and like nothing else, mobilized to secure their long overdue veterans status.

With the help of Bruce Arnold, General Hap Arnold’s son, and political help from Senator Barry Goldwater, a World War II veteran who had commanded WASP in his squadron, the WASP finally earned their veteran’s status in 1977.

In 2010, the WASP were awarded the Congressional Gold Medal by the United States Congress. Over 250 surviving WASP were on hand in our nation’s Capital to receive the honor.

in 2016 seventy-five years later, WASP can finally can be buried at Arlington National Cemetery, thanks to bipartisan efforts. President Barack Obama signed a bill into law allowing the ashes of woman who flew in the Women Airforce Service Pilots program (WASP) to be laid to rest at the military cemetery.

These original fly girls flew countless U.S. Army Air Forces planes for noncombat missions during the war in order to free up their male counterparts for combat. Between 1942 and 1944, they flew more than 60 million miles in bombers, transports and trainer aircraft.
In 1977, the female pilots were granted veteran status, but it wasn’t until 2002 that they were able to be buried at Arlington, which falls under Army regulations, unlike cemeteries operated by the Department of Veterans Affairs.

In 2015, then-Army Secretary John McHugh revoked that right after lawyers determined that those in the WASP program, listed as “active duty designees,” did not meet Army eligibility rules. That meant their ashes could no longer be placed in an above-ground structure at Arlington, according to a memo from McHugh that the Miller family obtained under the Freedom of Information Act.

The Commemorative Air Force RISE ABOVE: WASP is committed to honoring their service by inspiring people of all ages to rise above their own obstacles, based on the heroic and brave example of the WASP.