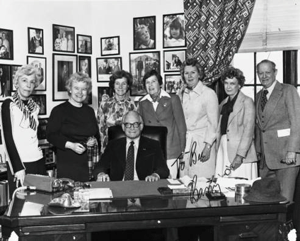 Following deactivation, the WASP experiment seemed destined to be forgotten.  Then, in the mid-1970s, the Navy announced to the media that, for the first time in history, women would be permitted to fly military planes. The announcement reverberated among the WASP, and like nothing else, mobilized to secure their long overdue veterans’ status.

With the help of Bruce Arnold, General Hap Arnold’s son, and political help from Senator Barry Goldwater, a World War II veteran who had commanded WASP in his squadron. President Carter granted these women veteran status on November 23, 1977. Sadly, many of the WASP had died and they were never recognized by their country for all they had done. These women compromised their lives and opened a door for future women. 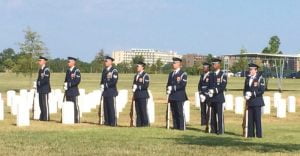 These original fly girls flew countless U.S. Army Air Forces planes for noncombat missions during the war in order to free up their male counterparts for combat. Between 1942 and 1944, they flew more than 60 million miles in bombers, transports and trainer aircraft.
In 1977, the female pilots were granted veteran status, but it wasn’t until 2002 that they were able to be buried at Arlington, which falls under Army regulations, unlike cemeteries operated by the Department of Veterans Affairs.

Unfortunately, in 2015, then-Army Secretary John McHugh revoked that right after lawyers determined that those in the WASP program, listed as “active-duty designees,” did not meet Army eligibility rules. That meant their ashes could no longer be placed in an above-ground structure at Arlington, according to a memo from McHugh that the Miller family obtained under the Freedom of Information Act. 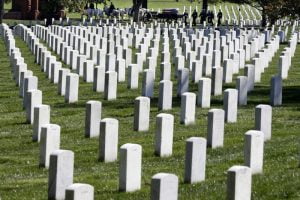 Finally, in 2016, seventy-five years later, WASP can finally can be buried at Arlington National Cemetery, thanks to bipartisan efforts.

Erin Miller of Maryland had brought the bill to the House after her grandmother Elaine Harmon was denied entry. “It’s not the funnest thing to have to ask Congress to pass a law to bury your grandmother,” she said. But after starting a petition on change.org and asking friends, neighbors and total strangers for their signatures, Miller’s bill picked up traction.

Sen. Joni Ernst, R-Iowa, who sponsored legislation in the Senate to help the WASP, said the change was needed to recognize the service and sacrifice of the women. 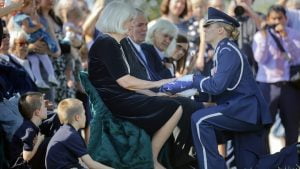 On May 20, 2016 President Obama signed the bill into law that allowed WASP to be able to be interred at Arlington National Cemetery. The bill Obama signed reversed McHugh’s decision.

Women Airforce Service Pilot Elaine Harmon was finally laid to rest at Arlington National Cemetery on September 7, 2016 in a service that was both reverent and joyful.It was overwhelming for family members. “It was her last wish to be in Arlington. We haven’t been able to hold a funeral for her because we wanted to honor that wish,” said Tiffany Miller, Harmon’s granddaughter.