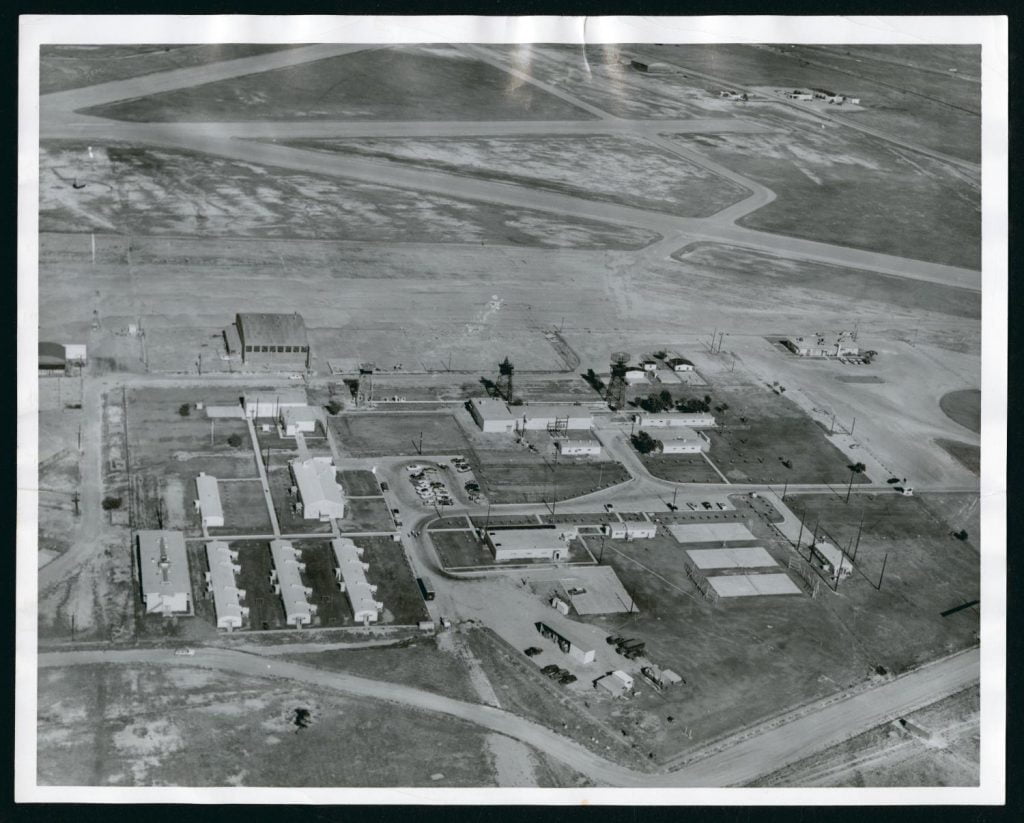 Avenger Field was the largest all-female air base in American history. Its origins date to the 1920s as the Sweetwater Municipal Airport. At the airport, a small flight school operated with World War I surplus Curtiss JN-4s and Curtiss Robins.

In the spring of 1942, the flight school was taken over by the Plosser-Prince Air Academy, which moved to the airport from California. Plosser-Prince was contracted by the Royal Canadian Air Force to train British and American volunteer pilots. The airport became known as British Flying Training School No. 7. On June 15, 1942, about 100 male flight cadets began a course that included primary, basic and advanced training.[3] Just before they arrived, the Sweetwater Airport was renamed “Avenger Field” in a contest won by a Mrs. Grace Faver.

In August 1942 the United States Government closed the private flying school and took it over as a United States Army Air Forces military installation. Avenger Field was to be turned over to the Air Transport Command as a transition school for experienced airline pilots in single-engine Vultee BT-13 Valiant basic trainers. From Avenger Field, the graduates would be sent to twin-engine school and subsequently for overseas duty as USAAF pilots. 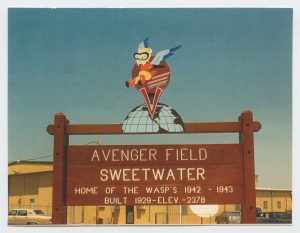 Photograph of the wooden sign in front of Avenger Field that includes a full-color depiction of Fifinella, the mascot of the Women Airforce Service Pilots (WASP). Buildings and cars are visible in the background.

At this time, Jacqueline Cochran was making plans for a training program for women pilots to participate in the war effort. Working with the Army Air Forces, she established a training facility at the Howard Hughes field in Houston, Texas, for Women Airforce Service Pilots, or WASP as it was known. However, she was unable to develop a satisfactory school there. In January 1943, she and the AAF began to look for an alternative location. Avenger Field was chosen due to its multi-phase training capability and other assets. The field was acquired by the Houston contractors from Plosser-Prince, and in February 1943 Avenger Field became an all-female installation except for a few male instructors and other officers. The field was officially assigned to the 318th Army Air Forces Flying Training Detachment, 31st Flying Training Wing. Flight training was contracted to Aviation Enterprises.

Licensed female civilian pilots were recruited and trained to fly military aircraft, ferrying them from factory to shipping point and on occasion flying damaged planes back for repair. This enabled more male pilots to be sent into combat.

Classes entered the WASP program at Avenger Field in monthly intervals. A total of 18 classes completed training: 8 in 1943 and 10 in 1944. Of the 25,000 women who applied for flight training, 1,830 were accepted, and of those, 1,074 received their wings. Training for women pilots paralleled but did not duplicate that given the men. Because the women were expected to go into ferrying, emphasis was placed on cross-country flying. Gunnery and formation flight training were omitted.

The first course was four months long. Although the hours were flexible and varied according to previous training, 115 flying hours were generally called for in addition to 180 hours of ground instruction. As the experience level of the trainees declined, the course was expanded and revised. By the end of 1943, the length had been extended to 27 weeks and the flying hours to 210. Few curricular changes were made in 1944; the main one increased training from 27 to 30 weeks.

The WASP were employed under the Civil Service program. It was always assumed they would become part of the Army when a proper place within the military organization could be found for them. In fact, bills were introduced in Congress to give them military rank, but even with General Arnold’s support, all efforts failed to absorb the WASP into the military.

Avenger Field remained a WASP training base until being disbanded in December 1944. 1,074 women pilots were trained at the facility including 37 that gave their lives in the service of their country. On December 20 the Army Air Forces disbanded the WASP program and the WASP returned to civilian life with no veterans’ benefits. In 1977 Congress finally granted benefits to the 850 remaining WASP.