When the pilots had completed pre-flight training and were ready to get into a cockpit, the next phases of flight training took place first at Moton Field then at Tuskegee Army Air Field, both in the vicinity of Tuskegee Institute.

Primary flight training took place at Moton Field. It was built between 1940 and 1942, owned by the Tuskegee Institute and operated under contract of the War Department. The facility included two aircraft hangars, four grass runways, a control tower, locker building, clubhouse, wooden office and storage buildings, brick storage buildings and a vehicle maintenance area. It was named for Robert Russa Moton, the second president of Tuskegee Institute. At Moton, cadets learned to fly bi-planes (PT-17 and PT-13) and monoplanes (PT-19). Tuskegee Institute was one of the very few American institutions to own, develop and control facilities for military flight instruction. 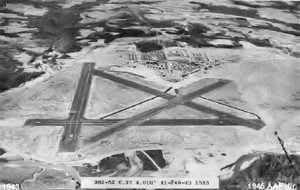 Basic, advanced and transition flying training took place at the larger Tuskegee Army Air Field several miles northwest of Moton Field. It was a full-scale but segregated military base built by the USAAC. Tuskegee Army Air Field was owned by the Army Air Forces. It had four paved runways and three large double hangars. Cadets flew basic trainer aircraft (BT-13) in basic flight training and advanced trainers (AT-6) in advanced training. Transition training for future fighter pilots took place on principle fighter aircraft (P-39 and P-47). Those training for possible bomber pilot positions flew twin engine aircraft (AT-10 and TB-25), although the trained bomber pilots would never deploy overseas because of the cessation of hostilities in 1945.

Most of the leadership and instructors in the Tuskegee program were white and all facilities were segregated. But at Tuskegee Army Air Field, Colonel Noel Parrish, head of the facility during most of the war, successfully integrated the base’s dining facilities, a remarkable change at the time.

After the war, training continued, but was expanded beyond Tuskegee to include other bases in New York, Oklahoma, and Arizona before the full integration of the Air Force in 1949.

In 1972, a large portion of the airfield at Moton Field was deeded to the city of Tuskegee for use as a municipal airport, still in use today. Presently, the Tuskegee Airmen National Historic Site, operated by the National Park Service, is located at Moton Field Municipal Airport.

Read on: A walk through Tuskegee’s Moton Field

At present day, only one runway at the original site of the Tuskegee Army Air Field is listed as active, but is held under private ownership. The original facilities are in ruins.