Despite their distinguished wartime record, the Tuskegee Airmen returned to an America unwilling to recognize their contributions. Racism and segregation continued to have a stranglehold on the country. Instead of being greeted with a hero’s welcome, the Tuskegee Airmen were segregated as soon as they disembarked the ships that brought them home. German prisoners of war were treated better than black Americans. It would be decades before their war efforts were acknowledged or even widely known, and it could be said that even today many people do not know about the remarkable achievements of the Tuskegee Airmen. Misinformation, or lack of any factual information at all, is rampant. 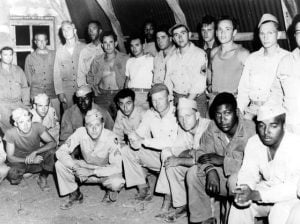 U.S. Army Air Corps Airmen at a base in Italy during World War II.

The Tuskegee Airmen continued their fight for social justice, alongside all black Americans, into the 1960s and beyond, but their performance in World War II contributed significantly to the desegregation of the U.S. Armed Forces. On July 26, 1948, President Harry S. Truman signed Executive Order 9981 that ended segregation in the military and set the stage for equal treatment regardless of race. The segregated 332nd Fighter Group was eventually inactivated and the personnel reassigned into other existing squadrons. It would take two years for the order to go into full effect and segregation to be completely banished from the military.

Many Tuskegee Airmen went on to have distinguished military and civilian careers. Teachers, doctors, lawyers, generals, congressmen, authors, Korean and Vietnam war heroes, and many more make up a snapshot of these fine Americans. They continue to be regarded for opening the doors to opportunity for minorities that would come after them. 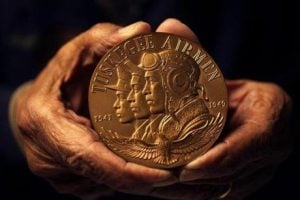 In 2007, the Tuskegee Airmen received the highest American civilian honor – the Congressional Gold Medal bestowed by the United States Congress. It is the highest expression of national appreciation for distinguished achievements and contributions. The Tuskegee Airmen received the medal as a 300-strong collective group, appearing at the U.S. Capitol to be honored by then President George W. Bush and Speaker of the House of Representatives Nancy Pelosi. The medal is on display at the Smithsonian National Museum of African American History & Culture in Washington, D.C.

“I would like to offer a gesture to help atone for all the unreturned salutes and unforgivable indignities. And so, on behalf of the office I hold, and a country that honors you, I salute you for the service to the United States of America.”