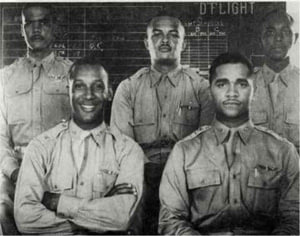 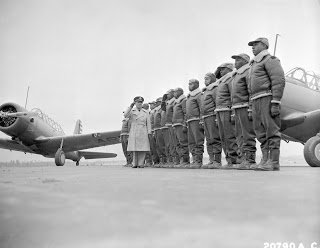 On March 7, 1942, the first class graduated from Tuskegee Army Air Field as US Army Air Corps pilots.  The class had started with 13 cadets but eight washed out of the rigorous training.  The five who remained had accomplished something that no black man had ever done before.

Who were those guys from Class 42-C anyway?

Captain Benjamin O. Davis, Jr., from Washington, DC
Davis was the son of Army Brigadier General Benjamin O. Davis, Sr.  He attended Western Reserve University in Cleveland, Ohio and the University of Chicago before being appointed to West Point in 1932. His experience as a black man at West Point where he was shunned – no other cadets spoke to him except in an official capacity  during his four years there – added to the strength of character that he would exhibit as he led his pilots into battle during World War Two.  He was actually stationed at Tuskegee, teaching military tactics at the Tuskegee Institute, when he was accepted into the newly established flight program for black men there.
His war record as a pilot and leader was exemplary, but what could arguably make him most notable as a military leader was his determination that his pilots do their duty and protect the bombers they were accompanying on missions, no matter what.  It was drilled into the fighter pilot cadets at Tuskegee that they were to stay with the bombers and never go roaming to seek out enemy planes during the mission.  They were particularly to stay with the “wounded birds,” planes that were limping along due to damage or system/engine issues.  Enemy fighters liked to go after the easy marks first.  It was the Tuskegee pilots’ flying skill coupled with their dedication to protecting the big bombers that earned them the “red tail angels” nickname.
After the war, Davis was instrumental in helping to draft a blueprint for the Air Force’s plan to desegregate along with the rest of the US military.  President Truman signed the desegregation order in 1948.
Davis retired with the rank of Lt. General in 1970 after serving in various US posts as well as Korea and the Philippines.  In 1988, President Clinton awarded him his 4th star, making him a full General.   At one point after his retirement from the military, he joined the US Department of Transportation where he supervised the sky marshal program and airport security measures.

Davis died on the Fourth of July, 2002 of Alzheimer’s disease.  During his funeral ceremony at Arlington National Cemetery, the Red Tail Project’s P-51C Mustang participated in the honorary fly-over.  Click here for more information about General Davis and pictures of his funeral cortege and the flyover.

Prior to being drafted into the military, Custis earned a Bachelors of Science degree from Howard University and in 1939, became Hartford’s first African American police officer.

After the Tuskegee graduation ceremony, Custis was assigned to the 99th Fighter Squadron and flew 92 combat missions in the P‑40.  He received the Distinguished Flying Cross for his heroism.  He later returned to Tuskegee as an advanced flight instructor and was released from active military service from the U.S. Army Air Force in 1946 with the rank of Major.  He returned to Connecticut and worked in state government.  Custis was the last surviving member of the first Tuskegee Airmen class when he died in 2005.

2nd Lt. Charles H. DeBow, Jr. from Indianapolis, IN
While DeBow was attending Hampton Institute (now University) in Virginia in 1939, the Institute was selected as a Civilian Pilot Training Program (CPTP) site and DeBow was one of 20 students chosen to learn to fly.  He loved flying so much that when he realized that there wasn’t enough money to allow him to attend college and fly, he quit school and moved to Chicago where he could fly, working in a steel factory to pay for it.  He applied twice to the US Army Air Corps to be a pilot and the second time was the charm – he was accepted into the first class at Tuskegee. After graduation, DeBow commanded the 301st Fighter Squadron starting in 1943 when it was assigned to Italy and he flew 52 combat missions in the European Theater, including support for D-Day.

2nd Lt. George S. Roberts from Fairmont, WV  .
Roberts graduated from West Virginia State College with a BS degree in mechanic arts in 1938.  While in school, he had joined the Civilian Pilot Training Program.  He was accepted to Tuskegee in 1941 and immediately after the 1942 graduation ceremony, he married his fiancée, which made the newsreels. and many magazines nationwide. Lt. Colonel Benjamin O. Davis Jr. named Roberts to be Operations Officer of the 99th Fighter Squadron and Roberts commanded the Squadron after Davis went back to the States to lead the 332nd Fighter Group.  Roberts eventually succeeded Davis as commander of the 332nd. Roberts flew 78 combat missions during the Second World War.

After the armed forces was desegregated in 1948, Roberts  became the first black officer to command a racially mixed unit at Langley AFB.  In 1950, he was assigned to Korea where he commanded the 51st Air Base Group and the Air Force base at Suwon.  He had a 26-year career in the military where he amassed more than 6,000 hours of flying time. He retired with the rank of Colonel in 1968 and went to work in the banking industry in California. He retired from that career in 1982 and died in 1984.  A bridge in his hometown is named after him as is the Tuskegee Airmen Inc. chapter in Sacramento, CA.

After the March graduation, he led the 100th Squadron as it was activated in May, 1942.  In July 1943, he became its Group Operations Officer (the Squadron was now based at Selfridge Field in Michigan).  He died on June 10, 1944 but circumstances regarding the cause of death remain elusive to a general researcher of modest ability.  The Dayton (OH) chapter of Tuskegee Airmen Inc. is named after him.

A small group of five men, all of whom were patriots in heart and pioneers in fact.

The CAF Red Tail Project is a volunteer-driven 501c3 non-profit organization that operates under the auspices of the Minnesota Wing of the Commemorative Air Force. For more information, please visit redtail.org.