Bringing an aircraft to life, after decades of neglect and exposure to the elements, is a formidable task. The great excess of time, expertise, funds and parts needed to make this kind of dream a reality are in short order. Through sheer grit and determination, members of the Commemorative Air Force have pulled off this miracle time and again, rescuing heaps of scrap from the junkyard to return to flight, an ultimate honor to the heroes of World War II that flew and maintained these majestic warbirds. 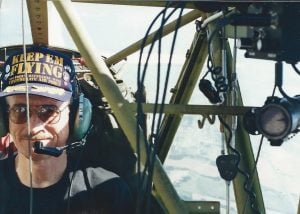 CAF member John Schuck shares his part in the spectacular resurrection of the CAF Red Tail Squadron’s own P-51C Mustang Tuskegee Airmen in his book There They Go. By all accounts, the memoir is a beautiful tale of one American’s love of aircraft, service to country and dedication to remembrance. Because of the good will of CAF members like Schuck, future generations will be able to see, hear and feel an important piece of history.

For the P-51 enthusiast, Schuck’s book recounts in great detail the humble beginnings of the restoration of the aircraft that would become the centerpiece of the CAF Red Tail Squadron. As with most things in life, the path was neither easy nor straight.

Schuck first encountered the aircraft that would become the CAF’s signature “red tail” in 1974 in a hangar at Crystal Airport in Minneapolis. It’s owner at the time had dubbed it the S&S Special and intended on modifying it for high performance at the National Championship Air Races in Reno, although that never came to fruition.

“It was 1974 when I first saw the CAF P-51C. It was a collection of parts with a relatively complete fuselage and wings…. Little did I think that restoring this aircraft was to be the prime focus of my CAF involvement. It was in the goals section of my application for membership in 1975.”

Schuck attempted to help facilitate a restoration between the owner and another private investor, to no avail. The steep cost of warbird ownership, restoration and maintenance is a tough sell.

An important side note, the aircraft had been used stateside as a trainer during World War II, and after was designated surplus. It sat on static display at Montana State College (now Montana State University) for nearly 40 years.

When the P-51 came to the CAF Minnesota Wing, where Schuck was an avid and active member, the plane had found a home in which to recuperate and be nurtured to flight once again. It was here the decision was made to restore the plane in honor of the Tuskegee Airmen who had shown great success in the airframe as America’s first black military pilots in World War II. A vision was born, and the Red Tail Project, the precursor to the CAF Red Tail Squadron, would make its debut.

Shuck put in much research and effort to drum up support for the concept and was the main support driver for the program. Finally, in 1992, the Wing was able to shift their focus to the project. At this time, the Tuskegee Airmen were still relatively unknown, so the time was ripe to not only restore a legendary warbird, but also help bring an important piece of American history to the mainstream.

Original Tuskegee Airman Kenneth Woffard became involved in the project giving his guidance, as would many other Tuskegee Airmen as the years progressed. In 1998, Don Hinz became the first flying sponsor of the aircraft and took the reigns to lead the program from Schuck, financially backing the completion of the restoration. Hinz most notably laid out a roadmap to bring the lessons of the Tuskegee Airmen into every classroom in America.

The aircraft was named Tuskegee Airmen and made its first debut flight in May 2001, an instant hit on the airshow circuit. Tragically, Hinz passed away in 2004 from injuries sustained in an engine malfunction in the P-51C, yet the mission prevailed, and the aircraft took to the skies again, a testament to the supporters of this fine program.

Like Schuck, CAF members around the country are filled with a zeal for service and remembrance. Without their selfless dedication, many historic relics would have fallen by the wayside. John Schuck personifies the spirit of the founding vision of the CAF Red Tail Squadron. He holds an important place in our own history book, and we owe him hearty thanks for playing a significant role in the formation of what today is the CAF Red Tail Squadron.

There They Go is available on Amazon. 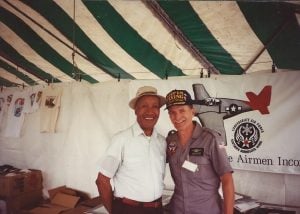