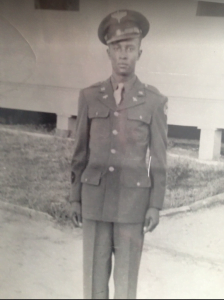 Alfred Steward Barclay was born on January 15, 1924 in Newport, Rhode Island. He was a member of 45 D Class Contract Pilot School, Tuskegee Institute in 1944.  Barclay received his wings and was killed in a flight training exercise on February 2, 1945. Major Douglas L.T. Robinson, Chaplin at Tuskegee, escorted the body to his home in Newport, Rhode Island for a full military funeral at Trinity Episcopal Church. His burial service was held at God’s Little Acre section within the Common Burying Ground. The section has the oldest and largest collection of existing burial markers of enslaved and free African Americans in America. Barclay was recognized as part of the Rhode Island Aviation Hall of Fame.  Members of the classes 45 D and E Contract Pilot School presented to Barclay’s mother a 48-star flag and a plague with the inscription:

“ Soldier, Classmate and Friend, His Sacrifice and Contribution To The End Towards Which We Are All Striving Was The Greatest Possible. May His Spirit Soar Forever On The Wings That He Gave His All To Earned,”

Thank you to Keith Stokes, nephew of Alfred Barclay, for submitting this information.