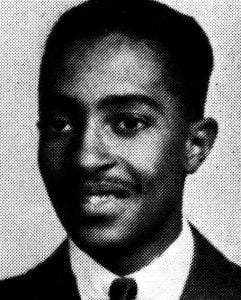 Alton was born November 25, 1925, in Washington Heights, a northern portion of the borough of Manhattan in New York City.

The family remained in Manhattan until Alton was thirteen years old when his father bought a home in Sayville, Long Island. Being an inner-city boy, the sudden loss of all his friends, combined with the dramatic change in the environment was initially a nightmare to Alton. He recalls going outside and being startled as the lack of street lights or activity.

Per his family, however, Alton came to realize realized that his relocation to Sayville was the very best thing that ever happened to him. Sayville steered his life in a highly positive direction.

In Alton’s eulogy, his son Michael spoke of his father’s teen years in the almost exclusively white town of Sayville, stating; “Despite his Jamaican background, my father felt accepted, and did not endure the racism that was so prevalent in the United States at that time.”

Alton was hired by Republic Aviation and trained as a blueprint layout worker.

Racism reared its ugly face when workers at Republic Aviation did not want to work with a man of color.  Alton was subsequently moved to the riveting department, where he had his first encounter with the warplane, the P-47 Thunderbolt. Two co-workers of Italian descent supported and helped him excel. Alton’s team soon became the best on the production floor, and working on the P-47 would become a significant part of his future endeavors. 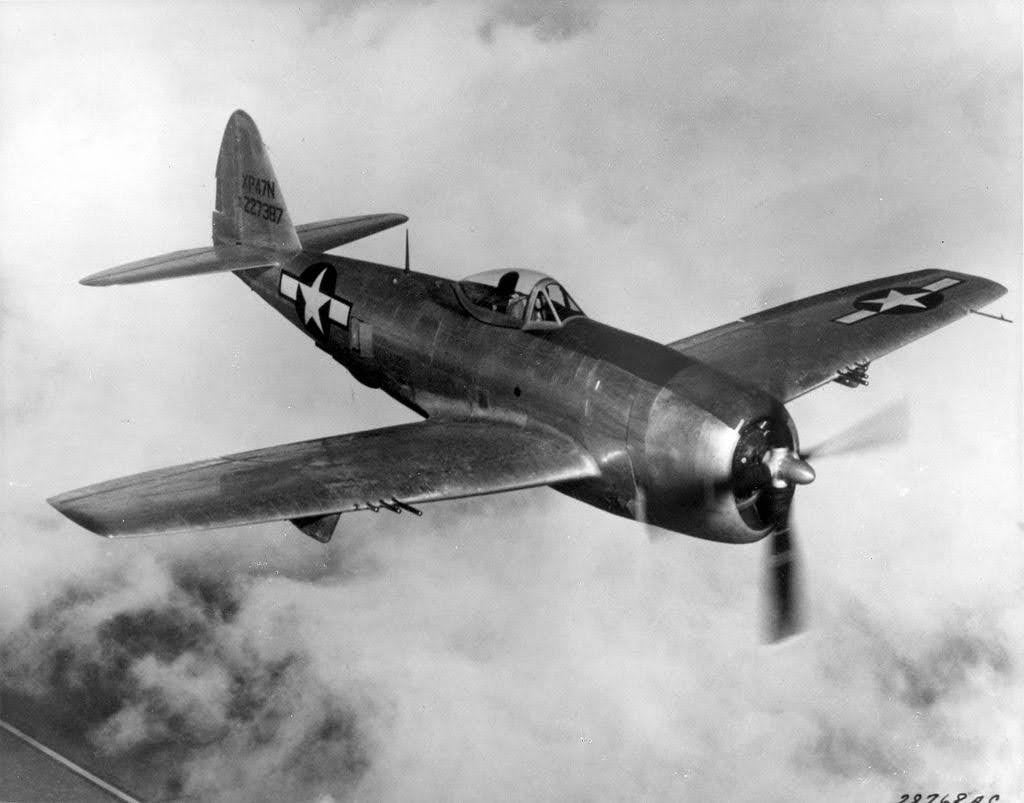 The republic Aviation poster to the right features a drawing of a bubble-top P-47 shooting down a plane.

The P-47 Thunderbolt is flying over a stylized view of the east coast of Asia, with Tokyo marked on the image of Honshu.

Entering the military, Alton was originally assigned to the Army Corps of Engineers. 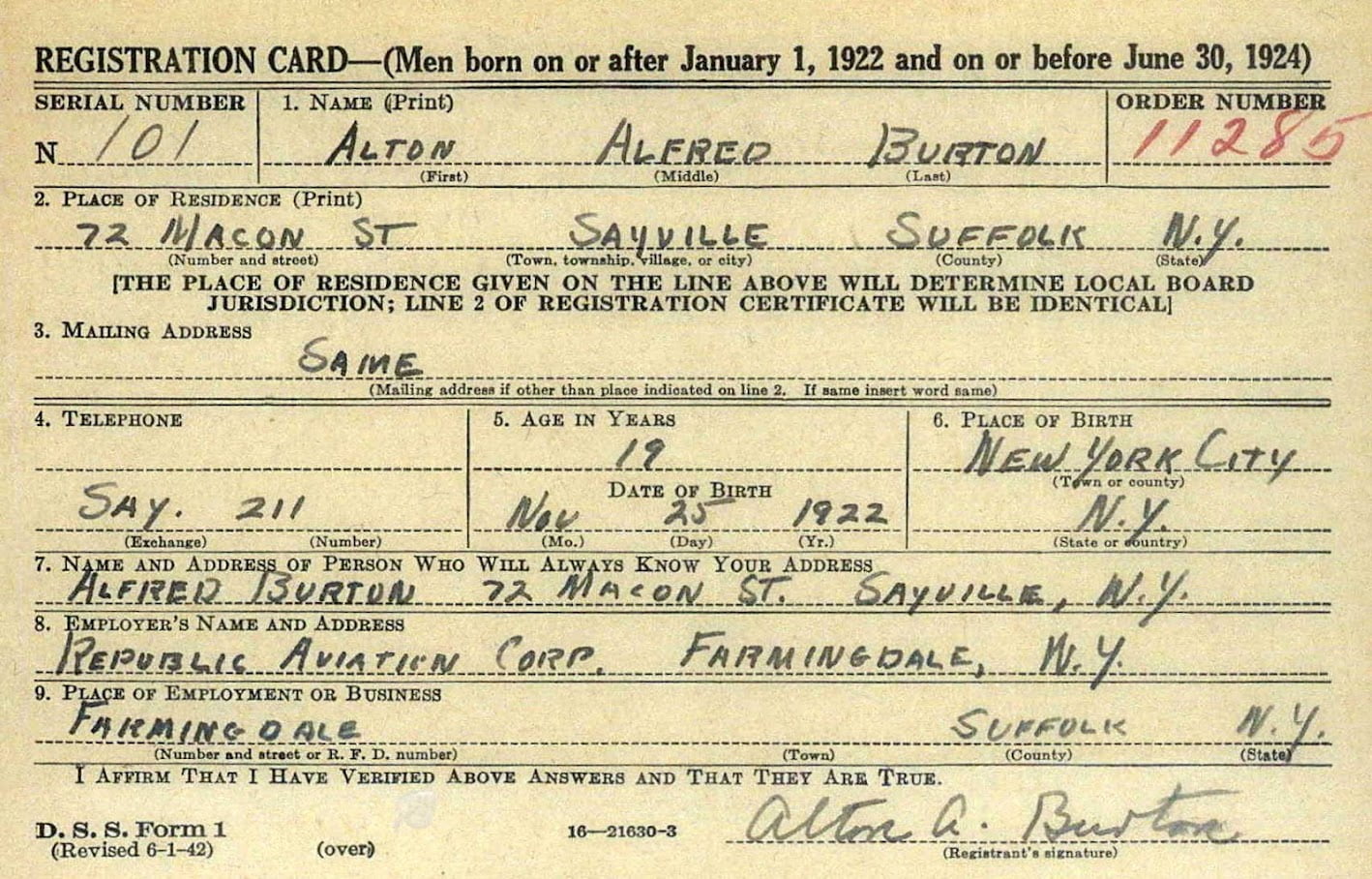 In 1942 he volunteered for the Army Air Corps. His love for airplanes soon prompted him to transfer to Tuskegee, Alabama for flight training. At Tuskegee, he was initially trained as a bombardier navigator, for which he received his officer commission and was assigned to a B-25 bomber crew.  At that time, however, Black aviators were not utilized in that role.

Alton was then reassigned to the Tuskegee flight school and trained and received his pilot wings for the P-47 Thunderbolt — the same airplane he had previously helped build on Long Island!

Alton distinguished himself during World War II as a member of the famed Tuskegee Airmen, earning three awards.

Alton returned to New York City before heading to the SUNY Plattsburg, where he took pre-engineering courses. That move that turned out to be the very best thing in his life, as this is where he met his soulmate and future wife, Dr. Vashti Curlin, whom he married in 1949.

Alton then attended the University of Michigan’s engineering school and received his Bachelors in Civil Engineering in 1950.

Soon afterward he earned his Masters’s degree at New York University and then his Professional Engineering license from the State of New York.

1952 was also the birth of his only son, Alton Michael Burton of New York City, who is a major contributor to the biographical sketch.

He was first hired by an engineering leasing firm that assigned him to work for the Port Authority of New York, and soon after he was employed there. His first assignment was in the Marine Terminal Department, which constructed shipping piers along the Hudson River waterfront in Brooklyn and New Jersey.

In June 1965 Alton was featured in a four-page article in Sepia Magazine, as the master planner of the civil engineering phase of the multi-billion dollar World Trade Center in New York City. 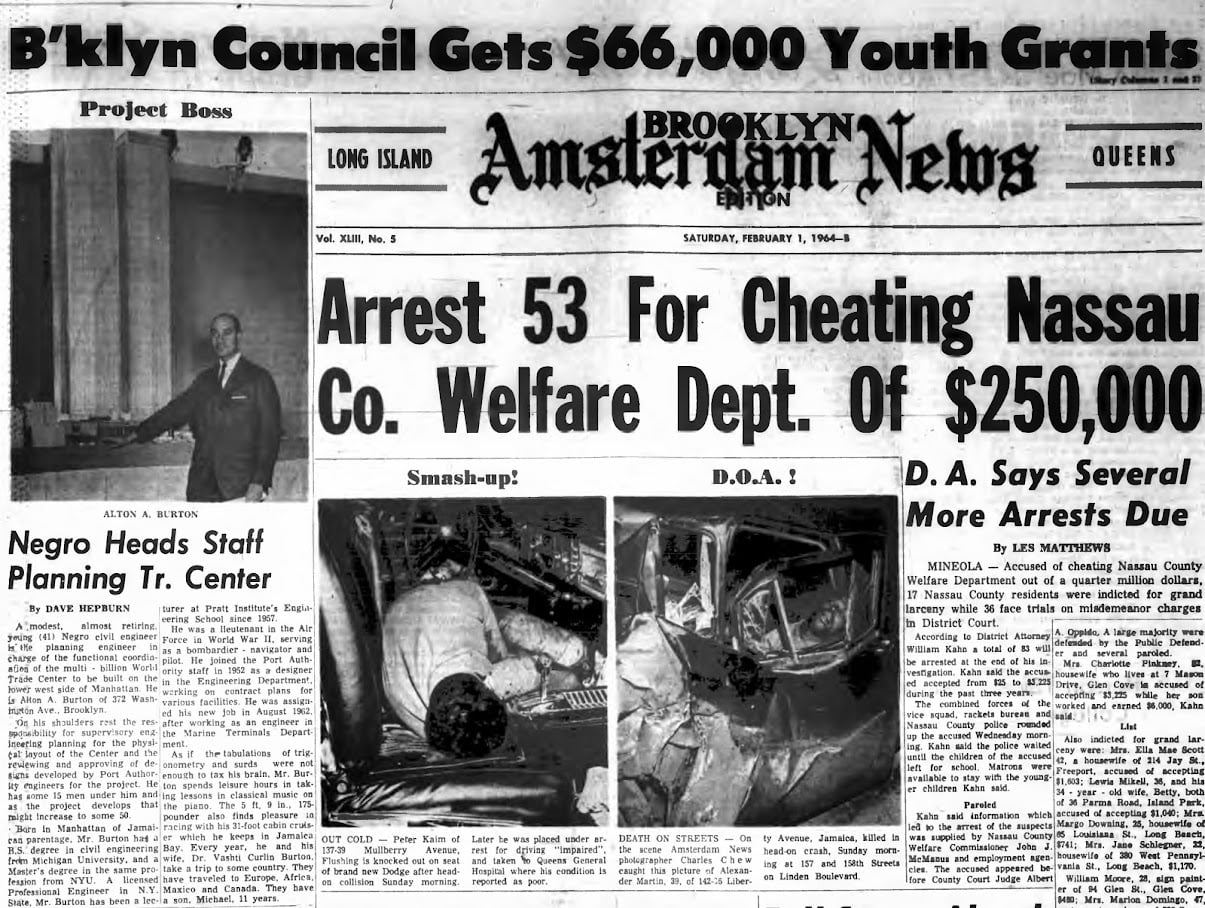 If not for Chief Civil Engineer Alton A. Burton’s vision of a fortified infrastructure, the World Trade Center’s Twin Towers would have immediately toppled to the streets below. With steel beams heating to over 3000 degrees F, the infrastructure still managed to endure. The North Tower held for 1 hour, 42 minutes and the South Tower for 56 minutes before the total collapse. We note (with regret) that approximately 3,000 lives were lost that infamous day and we offer our sincere condolences to their families. However, keeping in mind Mr. Burton’s efforts to fortify the infrastructure with the best materials known to architectural and civil engineering at that time, between 10,000 and 20,000 individuals were safely evacuated from the towers and surrounding areas, so many more lives were saved.

Chief Alton A. Burton’s prolific civil engineering work carries with it profound moral and philosophical insight, possessing power without arrogance, bringing redemptive clarity whose truths have never been more necessary as we honor the lives of those that were lost and their legacy by how we live. Alton A. Burton has risen at the age of 82 to become a Great American Hero, and we claim him as one of our own, both in title and in spirit.

As our nation moves forward with a unified purpose, we realize that purpose is perhaps more significant than outcome. It is what we all become in the process to embrace all of the opportunities this country has to offer as the real purpose. Alton A. Burton continues to live his life with purpose. The people of the city of New York, the United States of America and the world became a better place because Mr. Burton has given us all his best; and he has created a mark in American history and the world that cannot be erased.

Mr. Speaker, I believe that there are no words too magnanimous to fully describe our gratitude; we thank former Chief Civil Engineer Alton A. Burton for inspiring modesty, selfless devotion of the advancement of humanity through his devoted service to the United States of America.

Mr. Speaker, I believe that it is incumbent on this body to recognize that in Alton A. Burton we have an outstanding citizen worthy of the highest respect and esteem from his community, the City of New York and our nation.