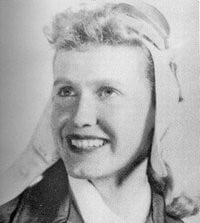 “I was one of the lucky women who were part of the experiment that proved women could fly as well as men.”

Lois Ann Russell was born at Bagley. After graduation from Bagley High School, she attended the University of Iowa where she completed the civilian pilot training program. Following graduation in 1941, Ann moved to New York where she worked at NBC Radio in New York, writing and broadcasting “The Women of Tomorrow” daily program, with the responsibility of filling the 30 minutes with fashion, food and tips for keeping husbands happy. She started using news bulletins about the war in Europe and urged women listening to save sugar, tinfoil and gasoline.

Her husband was going into the Navy when his medical training ended, and Mrs. Darr was one of the 25,000 women who applied for the WASP program. Only 1,830 were chosen, and 1,074 earned their wings. Mrs. Darr, dark-haired, 5-foot-8-inches tall and wearing a size 8 flight suit, trained at Sweetwater, Tex., under Jacqueline Cochran, the first female aviator to break the sound barrier.

Darr flew every kind of aircraft in simulated strafing and smoking missions, searchlight tracking and mountain mapping. She flew a plane with wind damaged wings from California to Texas for repair. She flew B-26s, towing targets at the gunnery school near Las Vegas, while gunners in B-17s fired live ammunition at the sleeve she towed. It was “aerial dish-washery,” as the WASP called it, the mundane but necessary tasks to keep the Air Force flying. The enemy was not just overseas. Someone cut the rudder cable of one female pilot’s plane in Texas and caused her to crash. Many of the planes were in no condition to fly, and one in South Carolina was sabotaged, with sugar found in its gas tank. Legend has it that when male pilots balked at flying the buggy B-29, WASP pilots were ordered into the cockpit to prove it was a plane that “even women could fly.” Thirty-eight WASP died during the two years of the program, and Lois never forgot one crash near Las Vegas, which killed everyone aboard. The body of the male Army Air Forces pilot was sent home with honors. Both the Army and the Civil Service disavowed responsibility for the female co-pilot; Lois and the other WASP took up a collection to ship her body home. The weather could also pose a danger. One windy morning, the pilots were called to the flight line. “We saw what we had to do,” she wrote. “We lined up on both sides of the runway so that as each plane came in, we grabbed the wings and kept it steady as we ran alongside it. I think we saved all the trainers who landed that day.” But despite the promise that WASP would become members of the military, Congress did not agree to it. Ordered to keep silent during the debate and not to write their congressmen, the pilots watched as their program was disbanded in December 1944, before the war ended

In the 1950s she moved to Washington and devoted herself to writing poetry, with flying often her subject. She taught creative writing, authored ten books, and is celebrated for her poetry.

Darr drew heavily from her experiences in her writing:

“I have had the deep pleasure of re-living the flying in the writing. The exhilaration, the excitement of rising into the air, the satisfaction of making every move count, the precision of it, being in control, and the sheer joy of seeing the sweep of the earth….”

She wrote of her experience as a pilot in her 1978 book, “Cleared for Landing”. In commemoration of the WWII Memorial Ann wrote an article for The New York Times Magazine, May 7, 1995, “The Women Who Flew – but Kept Silent” and for U.S. News and World Reports: “The Long Flight Home: Women Served and Died in WWII. Now they are remembered.” Her collection of poems, “Flying the Zuni Mountains is “dedicated to all women pilots particularly to the WASP members of 44-W-3 on this, the 50th anniversary year of our graduation, receiving of our wings.”

Lois Ann Russell Darr passed in 2007 and is buried at Arlington National Cemetery. In 2010, she and other members of the WASP were awarded the Congressional Gold Medal for their service. 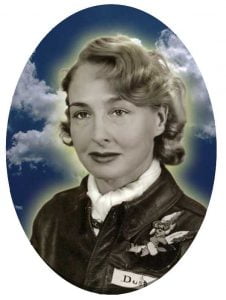 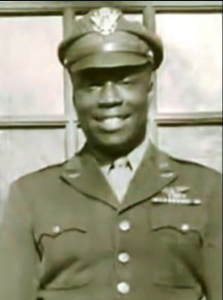