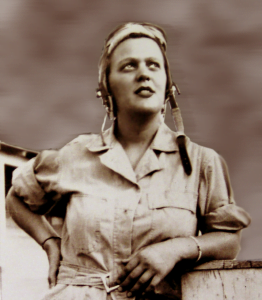 Noggle was born in Evanston, Illinois, in 1922, and died in Albuquerque, New Mexico on August 16, 2005. She set a goal of becoming a pilot after seeing Amelia Earhart at an air show in Chicago. When she was 17, her mother, a bookstore manager, agreed to let her take flying lessons.

At 21, Noggle traveled to Sweetwater, Texas, to train to become one of the Women Airforce Service Pilots (WASP). She graduated in the class of 44-W-1. She flew missions in 1943 and 1944. The WASP were disbanded in late 1944. After the war, she became a crop-duster in the Southwest and flew stunts in an aerial circus.

When the Air Force offered commissions to former WASPs after the war, she applied and was a pilot during the Korean War. She retired as a captain in 1959 when she developed emphysema. She later described her aviation career this way: “I flew airplanes for a living for eleven years and 6,000 hours . . . When I was twenty-five, I became a stunt pilot with an air show; when I was twenty-six, I became a crop-duster pilot.”

While in the Air Force, Noggle had been stationed in Paris. She visited the Louvre, which ignited an artistic impulse.

Noggle went back to school, at the University of New Mexico; she earned a bachelor’s degree in fine art in 1966 and in 1969 graduated with a master’s degree in art. At the UNM Art Department she developed her keen eye as a photographer, and her interest in making images of women as they aged, including her witty and challenging self-portraits.  She taught at UNM as an adjunct professor of Art from 1970-1984.  She received national recognition for her work as part of a National Endowment for the Arts grant for a New Mexico photographic survey (1981), two photography grants from the National Endowment for the Arts (1975, 1978), and a John Simon Guggenheim Memorial fellowship (1982). Her photographs have been exhibited in and collected by Museums throughout the world.

The University of New Mexico gave her an honorary doctorate, acknowledging her “extensive contribution to the field of art and art history.”

Influenced by female photographers such as Julia Margaret Cameron and Diane Arbus, Noggle’s work mainly focused on the aging process of women, a subject which she referred to as “the saga of the fallen flesh”. Using humor and pathos to depict the women she photographed, Noggle photographed her subjects in a way that displayed both femininity and sexual energy. Perhaps her most famous series of photographs was taken in 1975, when she photographed herself after receiving a facelift. Her ability to find beauty using bizarre subject matter typified her career as a photographer.

Ms. Noggle was 68 years old when she traveled to the Soviet Union to photograph and record the stories of the women Soviet Army veterans.  These women were the first women to fly combat.  Without Ms. Noggle’s dedication these women’s astonishing stories might have been lost to history.  Her book, A Dance with Death: Soviet Airwomen in World War II (1994), tells their riveting experiences and documents the paths of their lives with her contemporary portraits.  In June 2005 Ms. Noggle attended a reunion in San Diego with some of the Russian women pilots.

In 1983 UNM Press published Silver Lining. This out-of-print book showcased Ms. Noggle’s photographs that documented the challenges she and other women in America faced as they grew older. She described her experience as a photographer:

“To look straight into a face and find the pulse of what it is to be human, that is what fuels me, that is the sum of my mind and my longing. I am always aware of our unceasing engagement with time and space- our ultimate limitations- translated into life and death.”

Ms. Noggle’s books celebrated the accomplishments of women.  In 1975 she co-curated an exhibition and catalog for the San Francisco Museum of Art, Women of Photography: An Historical Survey.  This exhibition was of singular importance in introducing the work of American women photographers to a broader audience.

Her 1983 book Silver Lining showcased Noggle’s photographs documenting the challenges she and other women in America faced as they grew older.

It was natural that she would make portraits of her fellow WASPs as older women.  These portraits were published in For God, Country and the Thrill of It:  Women Airforce Service Pilots in World War II (1990). Her essay ““Remembrance” celebrated the contributions their contributions to World War II:

“How few women have had the opportunity not only to fly for our Air Force, but to be thrown together willy-nilly in training and to know the bonding that usually is associated with groups who live and work in close proximity.  This sense of belonging is all the more intense when the duties involve danger.”

A Dance with Death, telling the story of the Soviet airwomen of World War II, was published in 1994. Noggle had traveled to the Soviet Union to photograph and record the stories of these women.

The Harn Museum at the University of Florida presented an exhibition of Noggle’s photographs from June 26, 2012 to March 10, 2013. Its title was Anne Noggle: Reality and the Blind Eye of Truth. The New Mexico PBS series, ¡Colores!, featured Noggle in an episode filmed during her lifetime. In 2016 the New Mexico Museum of Art, her former employer, honored her with her a solo exhibition.

Noggle’s work is in the permanent collections of several art museums, including New Mexico Museum of Art, Albuquerque Museum, California Museum of Photography, Denver Art Museum, Minneapolis Institute of the Arts, the National Gallery of Canada, and the San Francisco Museum of Modern Art.

Why she photographed older women: