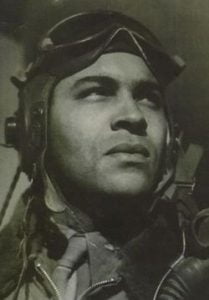 Tuskegee Airman. Captain McDaniel was among 72 members of the 332nd Fighter Group who, on March 24, 1945 departed their base at Ramitelli, Italy on an important bomber escort mission. The 332nd was to escort the bombers for the first segment of their mission. When the relief squadron that was to escort the bomber formation to their destination in Berlin did not appear, the 332nd pressed on, even though their P-51 aircraft were getting low on fuel. As the bombers approached their target, the were attached by a formation of German Me-262 jet fighters. The 332nd, engaged these aircraft and shot down three. No bombers were lost. Captain McDaniel was one of two Tuskegee Airman shot down and he was taken prisoner. He was freed at the end of the Second World War. He subsequently saw combat during the Korean War and later retired from active duty as a Lieutenant Colonel.

Lt. Col. Armour G. McDaniel Sr. was a prisoner of war for a month after leading the 332nd Fighter Group on a mission that would earn it a Distinguished Unit Citation.

“After Elsberry attacked the leader, I attacked the leader’s wingman,” McDaniel said in an interview that was published in “The Tuskegee Airmen: The Men Who Changed a Nation” by Charles E. Francis and Adolph Caso. “I couldn’t catch him somehow, but glancing downward, I saw another enemy pilot trying to make his getaway. I dived on him, dropping from 27,000 feet to 10,000 feet. When I ﬁred on him, he dove through some clouds and crashed against a mountain. I pulled up just in time to miss crashing into the mountains.”

On Oct. 14, Capt. Alfonza W. Davis led an escort mission to oil ﬁelds in southeastern Germany. During the attack, Lt. Robert J. Friend strafed an oil barge. It exploded, engulﬁng Friend’s plane in ﬂames. Friend ﬂew through the ﬁreball; his plane was not damage. McDaniel strafed another barge, clearing its deck just as it exploded. The blast destroyed the wing guns on McDaniel’s plane, but he was able to ﬂy back to Ramitelli Air Field, Italy, where the 332nd Fighter Group was based.

In January 1945, McDaniel was appointed commanding oﬃcer of the 301st Fighter Squadron, replacing Maj. Lee Rayford who returned to the United States.

On March 24, the Fifteenth Air Force launched its longest mission: A 1,600-mile round-trip mission to a tank assembly plant in Berlin, Germany. Pilots from the 332nd Fighter Group, led by Col. Benjamin O. Davis Jr., escorted bombers to support the mission, leaving Ramitelli Air Field at 11:45 a.m. The ﬁghter pilots who were scheduled to relieve the 332nd Fighter Group at the outskirts of Berlin were late; Davis instructed his pilots to continue toward the target. Before reaching Berlin, though, Davis reported engine trouble and was forced to turn back toward Italy. McDaniel took command of the group.

As Allied ﬁghters and bombers neared the capital, 25 enemy ﬁghter jets attacked. The 332nd Fighter Group fought back, and by the end of the day it had destroyed three enemy planes and would earn a Distinguished Unit Citation, but McDaniel was shot down and captured.

“I was ﬂying in (Davis’) ﬂight on the mission,” Lt. Jimmie Lanham said after the mission, an interview that was published in “The Tuskegee Airmen: The Men Who Changed a Nation.” “I was an element leader and Whitney (Yenwith) was my wingman. McDaniel had blue ﬂight.

Col. Davis’s plane developed engine trouble just before we reached Berlin so he returned to the base and McDaniel took over the group.

“After we were attacked by the jets, I heard Schell (Wyrian) say, ‘McDaniel just got shot down.’ Someone said, ‘There he goes.’ I heard Walter Manning say, ‘Here’s a whole bunch of them.’ A jet came in at 90 degrees to attack the bombers. We made a 180-degree turn, but the jets went over the horizon before we could get to the attack point. There were about 25 enemy planes in the air.”

McDaniel was held at Stalag Luft VIIA near Moosburg, Germany, until the camp was liberated on April 29.

In 1946, McDaniel returned to Tuskegee Army Air Field as commandant of cadets. He served in the Korean War and led several units in Alaska in the 1950s before retiring from the Air Force in 1964 as a lieutenant colonel. After retiring, McDaniel became a civil rights specialist with the U.S. Department of Health, Education and Welfare in New York.

McDaniel died in Nov. 12, 1989, in Indianapolis; he is buried at Arlington National Cemetery in Arlington, Va. Obituaries say McDaniel was awarded a Purple Heart for his military service. 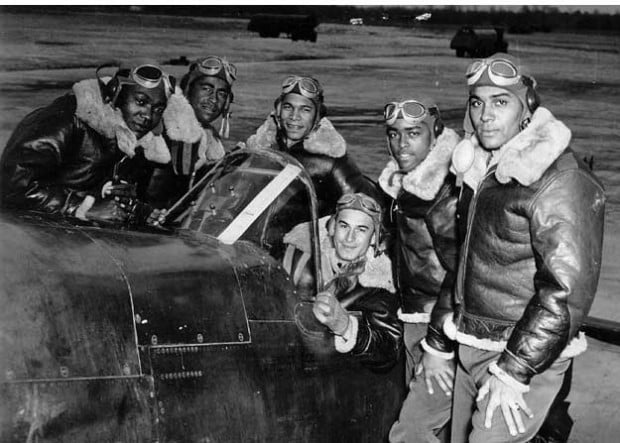