Harmon was born in Topeka, Kansas on June 26, 1925. Harmon’s family subsequently moved to Los Angeles, California, where he grew up. Having aspirations of being a musician, Harmon joined the Musician’s Union at the age of 17. However, he also wanted to become a pilot, having grown up building model airplanes and listening to radio broadcasts such as Air Adventures of Jimmie Allen. Harmon enrolled in the pilot training program at the United States Army Air Force Tuskegee Army Air Field class 45-G-TE in 1943. He graduated from the program on October 16, 1945 as a 2nd Lieutenant.

Upon graduation from the Tuskegee Army Air Field training program, Harmon was assigned as a pilot to the 477th Bombardment Group in the 617th Bombardment Squadron. The squadron never saw action as the war ended before they could be deployed. The squadron was disbanded on July 1, 1947. 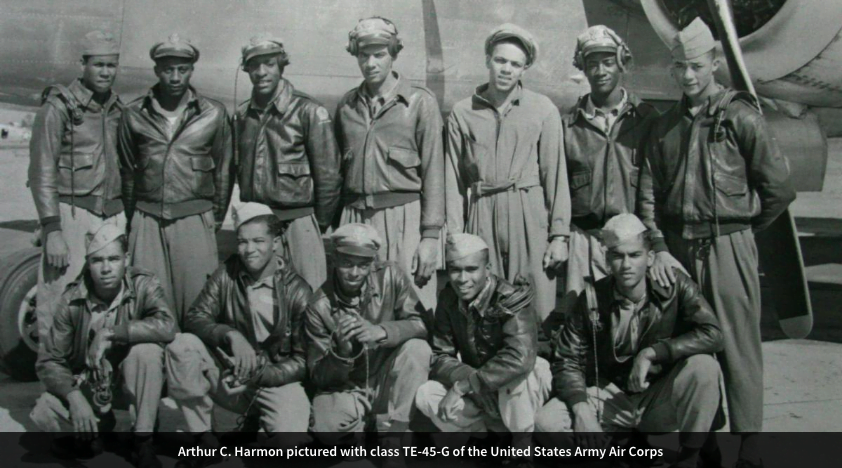 Harmon enrolled in George Pepperdine College at the time of his discharge from the service to continue pursuing his interest in music. In 1953, he married Irene Prince. They had four children.

Harmon was recalled to active duty in 1951. He was stationed at number of air force bases throughout his career, including Mountain Home AFB, Fairchild AFB near Spokane, Washington, Yokota AB in Japan, Hill AFB, Elmendorf AFB, and Langley AFB. He tours of duty took him to the Strategic Air Command, the Far East Air Forces, the Alaskan Air Command, and the 4500th Air Base Wing where he worked in Major Air Command Aircraft Accident Prevention. He retired from active duty as a Major in 1968. Subsequently, he was promoted to Lt. Colonel when he transitioned to the Air Force Reserve.

After his retirement from the military, Harmon returned to his interest in music and became a member of Las Gallinas Valley Sanitary District Non-Marching Band. He also joined the Retired Officers Association and the Air Force Association. He actively participated in the William “Bill” Campbell chapter of Tuskegee Airmen, Inc.

In his honor, in 2008 a soil exposure on Mars was named after Harmon and investigated by the Mars Exploration Rover, Spirit, as a target of scientific interest.

Other materials belonging to Harmon, such as his personal Bible with its metal jacket, his flying helmet, his survival kit and his dog tag chain can be viewed and enjoyed in the permanent Tuskegee Airman exhibition in the Rivera Library first floor reception area.