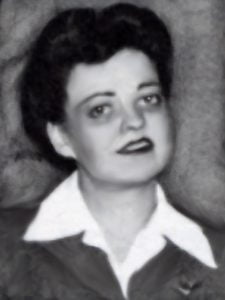 Several of the original WAFS had the misfortune of having their homes destroyed by fire: specifically, Cornelia Fort, Helen Mary Clark and Barbara Donahue Ross. Barbara writes that her log books, along with much of her WAFS memorabilia, were lost in a fre that destroyed her home near Warrentown, Virginia.

Barbara Donahue, born March 25, 1920, in New York City, to Charles and Mattie Donahue, spent a year at Vassar. At age nineteen, realizing she wanted to learn to fly, she began lessons at nearby Roosevelt Field and soloed in a Stinson 105 early in 1940. The loss of log books obscures some of her flying milestones but, possessing her instructor’s rating, she went to Houston, Texas to teach flying through the CPT program there. Future WAFS Esther Manning and Bernice Batten were teaching there as well.

She went to New Castle AAB to meet with Nancy Love and Colonel Robert Baker and passed her test flight, becoming number sixteen on the WAFS roster. In January 1943, Barbara was transferred to the 3rd Ferrying Group in Romulus, Michigan, along with Del Scharr, Barbara Poole, Katherine Rawls Thompson and Phyllis Burchfield. She served for more than six months under Del’s leadership, ferrying trainer airplanes. In mid-summer, when Nancy Love relieved Del of her command, she placed Barbara in charge of the squadron. Barbara served the remainder of here active service in that position with Lenore McElroy as her executive officer.

Barbara was the second woman to check out in the 1,325 horsepower P-39 Aircobra, soon after Del’s historic flight on June 28, 1943. Then it was on to pursuit school in Palm Springs in December 1943. She graduated in Class 44-4 in early February. “After that, I mostly flew P-39s and the P-63s.” In April 1944, she was a member of the first Office Training School class in Orlando, Florida.

After deactivation, Barbara went home to New York City and on November 11, 1946, she married Howard Clyde Ross – a fellow pilot whom she met while stationed at Romulus.

Enroute to Great Falls, Montana, from the Bell Aircraft factory in Buffalo, New York, Barbara Donahue’s P-39 developed a problem that she knew could only be fixed on the ground. The WASP ferry pilot checked her surroundings and saw no optimum place to land so, since she was over sparsely populated North Dakota, she opted to set the airplane down on a deserted stretch of highway.

As she flew her final approach, she overtook a bus.

Both the bus driver and his passengers looked up to see a P-39 bearing down on and then soaring over the top of them.

The plane landed several hundred feet down the highway and rolled to a stop. As the bus pulled up behind the aircraft — now blocking both lanes — all aboard watched as out stepped a tall, willowy woman pilot.

The driver leaned out the window and shouted, “What’s the matter, lady, get tired of flying?”