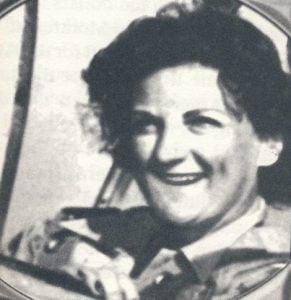 Barbara was born January 28, 1917, in Bronx, New York. But her family was actually living in West Virginia at the time. Her father was Bert Sabin, a manufacturer. Her mother was Garnette Poole. When her parents divorced Barbara took her mother’s name by choice. “After the divorce, my mother took a job as a salesgirl in Gimbel’s basement to support herself and me. Six months later, she was an assistant buyer. In a year, she was head buyer in ready-to wear. She had a very successful career in retail, worked there for many years then went to The May Co.”

The day she saw a JN4-D make a forced landing in a nearby field in New Jersey, Barbara became enamored of airplanes. She was three. “I remember it was yellow and a biplane. It looked like a Stearman. Years later I found out it was a Jenny. When I was growing up, my parents would tell me that if I was a good girl, I’d grow wings and fly. I used to dream about growing wings and flying above the family car.”

She did better than that, she learned to fly an airplane that soared far above earthbound automobiles. And then when she was flight instructor in Detroit, she heard about the WAFS. “I was making ten dollars an hour, which was a fortune back then!” She had already gone to Montreal to try to join the group going with Jackie Cochran to fly in England for the ATA. She and Sis Bernheim were there at the same time and got the same disgruntled instructor who flunked all six American women that day. Barbara was the one responsible for notifying Sis when an opening in the WAFS squadron occurred late in the year.

Barbara had 1,800 qualifying hours but did not have certification of a 200-horsepower rating when she arrived in Washington to join the WAFS and had to leave the squadron to get it. She returned a day later and was accepted by Nancy Love and Colonel Baker. She was number nine of The Originals

In January 1943 Barbara went to Romulus and ferried trainers. She left the squadron late 1943 for health reasons. She eventually married Charlie Shoemaker and had they had two children.