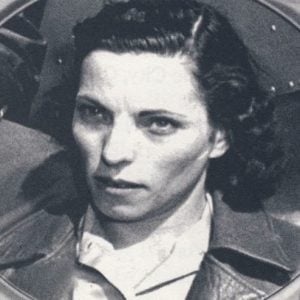 The first females to fly for the U.S. military were the “Originals,” better known as the Women’s Auxiliary Ferrying Squadron, a WWII group led by aviatrix Nancy Love. Twenty-seven women strong, between the ages of 21 and 35, this elite corps of experienced pilots ferried planes across America from factories to docks for shipment overseas.

Born in Scammon, Kansas, Bernice always dreamed of flying. She attended Kansas State Teachers’ College, Pittsburg, Kansas and then left to get flight training at Atkinson Municipal Airport, Pittsburg, Kansas. She worked part-time to pay for the flying lessons and receive her private, limited commercial and transport licenses. She moved to California and became a flight instructor for CPT and for Air Activities, Houston Texas.

In September of 1942, Nancy Love was appointed as the director of the Women’s Auxiliary Flying Squadron (WAFS) under Major Tunner and given a chance to prove the skeptics wrong. Nancy initially sent telegrams out to eighty-three of America’s best women pilots recruiting them as civilian pilots serving in the Ferry Command.

The women had to be between twenty-one and thirty-five, have logged at least 500 hours in the air, hold a commercial license, a 200-horsepower engine rating, and have recent cross-country flying experience. Twenty- seven women met these rigorous standards and answered the call to serve their country during wartime and Bernice Batten was one of the Twenty-seven.

These twenty-eight women, “The Originals” as they would come to call themselves, began ferrying light aircraft and primary trainers such as Stearmans and PT-19 Fairchilds. They quickly went on to check-out in larger aircraft including pursuit planes such as the P-38 and P-51. The WAFS merged with Jackie Cochran’s program, the Womens Flying Training Detachment (WFTD) in 1943 to become the Women Airforce Service Pilots (WASP). Collectively these women surpassed all expectations and proved that women could fly military aircraft with as much skill and competency as their male counterparts.

Bernice Batten was assigned to Long Beach Army Air Field, Long Beach, California. she checked out in BT-13 and started ferrying them from a factory at Downey to various training bases. She was then sent to Love Field, Dallas Texas where she ferried the PT-13, AT-6 and the A-24 and had to “bail out” of an A-24. This made her an elite member of the “Caterpillar Club” composed solely of those who had been forced to resort to parachutes in an emergency.