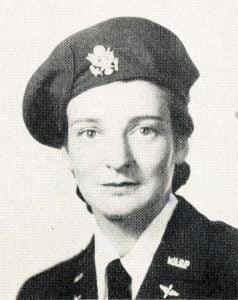 Bernice “Bee” Falk Haydu December 15, 1920 – January 30, 2021 Class: 44-W-7 Training Location: Avenger Field (Sweetwater, Tex.) Planes flown: PT-17, BT-13, AT-6, AT-17, UC-78 Assigned bases: Pecos Army Air Base (Tex.)“Follow your dreams. There may be pitfalls along the way but just pick yourself up, dust yourself off and continue on your way.” – WASP Bernice “Bee” Falk Haydu Bernice “Bee” Falk Haydu was an American aviator and Women Airforce Service Pilot (WASP) in World War II. Haydu remained active in aviation and as an advocate for women pilots into her 90s.Bernice Falk was born and raised in Montclair, New Jersey. She graduated from high school there in 1938. While working as a secretary, she enrolled in aviation classes on weekends, because her brother Lloyd was in the Army Air Force and she found that she also liked flying. In 1944 she attended WASP flight training in Sweetwater, Texas.After completing training in March 1944, Bee Falk was assigned to Pecos Army Airfield as an engineering test pilot and a utility pilot for the remainder of the WASP program. After the war, Bee Haydu ferried aircraft and opened a Cessna dealership. She owned a flight school with several other veterans, and worked for Indamer, a New York company that sold aircraft parts to India. She also participated in airshows, and in two Powder Puff Derbies. In 1971, she was seriously injured as a passenger in an airshow flight in Ottawa. 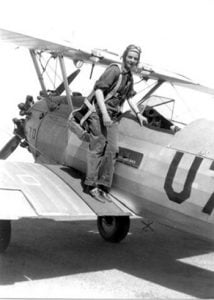 Falk was president of the Order of Fifinella, an alumnae group for WASPs, from 1975 to 1978; during her tenure WASPs were officially recognized as veterans by Congress and from 1978 to 1980 she was president of Women Military Aviators. She was one of the three surviving WASPs present in the Oval Office in 2009, when Barack Obama awarded the Congressional Gold Medal to the WASPs for their service. In May 2000 Bee was inducted into the Aviation Hall of Fame & Museum of New Jersey, and in 2015 she received an honorary doctorate from Vaughn College of Aeronautics and Technology.Bee Falk married fellow aviator Joe Haydu in 1951. They had three children together, Joseph, Steven, and Diana, born in 1952, 1953, and 1954, respectively. She was widowed in 2001, and spent her later life in Florida. Haydu published a memoir of World War II, Letters Home 1944-1945, in 2008. She gave memorabilia and an oral history interview to the Library of Congress and donated other materials to the Texas Women’s University in Denton, Texas. There is a plaque commemorating the work of Bee Falk Haydu at the Aviation Hall of Fame and Museum of New Jersey at Teterboro Airport, and her WASP uniform is on display at the National Air and Space Museum.Sources: Texas Women’s University Women in Aviation Wikipedia