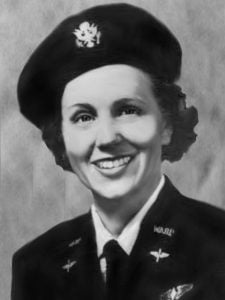 Elizabeth “Bettie” Mae Scott was born in Monrovia, Los Angeles County, California. Her father was the Chief of Police of the town. She was a graduate of Arcadia-Duarte High School, and attended Pasadena Junior College.

In October 1943, she entered AAF training at Avenger Field, Sweetwater, TX, and she graduated on 15 April 1944.

On July 8, the day before Susan Clarke’s funeral and the day after Paula Loop’s death, another woman was already falling from the sky.

Bettie Mae Scott was engaged to be married. It had been a whirlwind romance with Lieutenant Frank Cramer, a flight instructor and P-38 pilot stationed at the Waco Army Airbase near Waco, Texas. The two had met not long after Bettie’s graduation from Avenger field in mid-April and her returned from a ten-day visit home. They planned to marry at the end of July 1944, perhaps on Bettie’s 23rd birthday. Bettie was born July 26, 1921, in Monrovia, California, a small town at the base of the San Gabriel Mountains, a few miles east of Pasadena. Her father, Frank, had been police chief in the town since 1926 and had been a city policeman since 1913. Bettie was Frank and Virgel Scott’s oldest daughter and the third of their four children.

Less than three weeks before her 23rd birthday, July 8, 1944, Bettie was walking beside a BT-13 Valiant on the flight apron at Blackland Army Airfield in Waco. 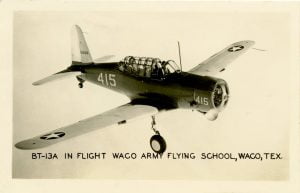 She had already checked the maintenance sheet on the plane and before taking off was doing her final preflight walk-around. The damaged Valiant was now repaired and it was Bettie’s job to see if it was airworthy enough for a male trainee pilot to fly. Just before 8:30 that morning, she climbed into the cockpit, continued her preflight checklist, and fired up the motor. As she left the runway, the plane began to climb at too steep of an angle. Reaching 100 feet and no longer able to gather enough wind under its wings, the plane stalled, began to roll, and dropped. It smashed down onto its back, instantly killing Bettie.

Later investigation would show that mechanics missed defects in the tail section of the aircraft and Bettie never saw them during her walk-around.

As WASP were not officially recognized by the military until many years later, Bettie Mae was sent home without military honors and in a cheap pine box. Her fellow pilots paid for her body to be returned home. On the day of her funeral many Monrovia businesses closed and the Police and Fire Departments escorted her to her resting place at Live Oak Cemetery in Monrovia. She was one of only thirty-eight WWII WASP killed while in the service of their country. In 2000, Pasadena City College selected Bettie Mae Scott to be one of their 75 most distinguished alumni. On March 10, 2010 Bettie Mae was posthumously honored at a Congressional Medal ceremony in Washington, DC, where all WASP were presented bronze replicas of the Congressional Medal for their service.