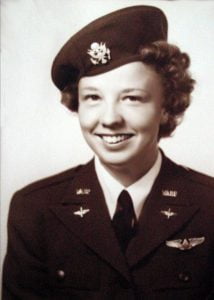 “Follow your dreams!  You’re capable of doing it, if you want it hard enough. You can do it!”
Betty June “BeeJay” Overman Brown

Betty was born in Atalissa, Iowa, on June 18, 1923, to Charles and Nelle Metzinger Overman. She had two older sisters, Bonita and Janice, and an older brother, Robert. When Betty was 2 months old, the family moved to Detroit, and later, to Rosedale Gardens in Plymouth, Mich. Her family spent time during the summer at the nearby Bishop Lake, where she developed a lifelong love of the outdoors.

Betty attended schools in Detroit and Plymouth, where she was an honors student, captain of the swim team and played the lead in the senior class play. As a member of Rosedale Gardens Presbyterian Church, she was a choir member and Sunday school teacher. She was accepted at the University of Michigan, Ann Arbor, but instead chose to work for Burroughs Adding Machine, and later, for Detroit Diesel in the payroll department. During this time, she became interested in flying, began taking lessons and, on April 24, 1943, soloed a 65-horsepower Taylorcraft. Shortly afterward, she and a friend bought a small plane together.

Brown was working at a General Motors diesel office in a Detroit suburb when the flight bug hit her, in 1941. Her office was close to a grass-strip airport.

After seeing the July 19, 1943, issue of Life Magazine featuring a female Air Force pilot on the cover, Betty applied to the Women’s Airforce Service Pilots (WASP) program and was accepted. She reported to Avenger Field in Sweetwater, Texas, in February 1944. “I wondered what in the world the world looked like from up there,” she recalled. “I got a ride, liked what I saw and began training. I got the required hours to enter training with the WASP training group.”

At the age of 19, Brown began training in Sweetwater.

“I wanted to contribute to the war effort,” she recalled.

On Sept. 8, she received her wings and reported for duty at Aloe Field, where she towed targets for aerial gunnery practice, flying a 600-horsepower AT-6. The sisterhood of the WASP remained very important to Betty for the rest of her life.

Brown was on duty for about four months when the WASP program closed on Dec. 20, 1944. By that time, male pilots began returning home in increasing numbers.

“Our purpose,” she said, “was to take the place of the men, so that they could go overseas. I towed targets for aerial gunnery practice, for the cadets in Texas. We had accomplished what we set out to do,” Brown said in an interview.

After the war, Betty moved to Florida, where she met her husband-to-be, Ron Brown. They were married in December 1948 and enjoyed more than 65 years together. They lived first in Denver, and later, in Chevy Chase, Md., raising a daughter, Kathy, and two sons, Rod and Tyler. During this time, Betty and Ron grew to be avid whitewater canoeists, spending vacations canoe-camping all along the eastern seaboard, but especially in the deep woods of northern Maine on the Saint John, Allagash and Penobscot Rivers.

In the fall of 1970, Betty and Ron bought a small camp without electricity or running water on Gilman Pond in North New Portland, Maine. The following August, after the first expansion of the camp, Betty suggested they move there permanently with son Tyler. This became their home for the next 38 years, and they used it as a home base for exploring whitewater throughout the Maine wilderness, including the Allagash River, which Betty solo canoed.

During these years, Betty was busy with the community, serving on the town planning board, as well as the school committee, and as chairman of the Maine State Critical Areas Advisory Board. When husband Ron retired in 1983, they bought a 1958 PA-18 Piper Cub together. Betty renewed her pilot’s license, and she and Ron flew all over the country, especially enjoying the fly-ins at Sun and Fun in Florida, and the EAA fly-in in Oshkosh, Wis.

In 1977, President Jimmy Carter awarded the WASP full military status and, in 2010, Betty traveled to Washington, D.C., with about 175 surviving WASP — and her entire family — to accept the Congressional Gold Medal for their service during World War II. 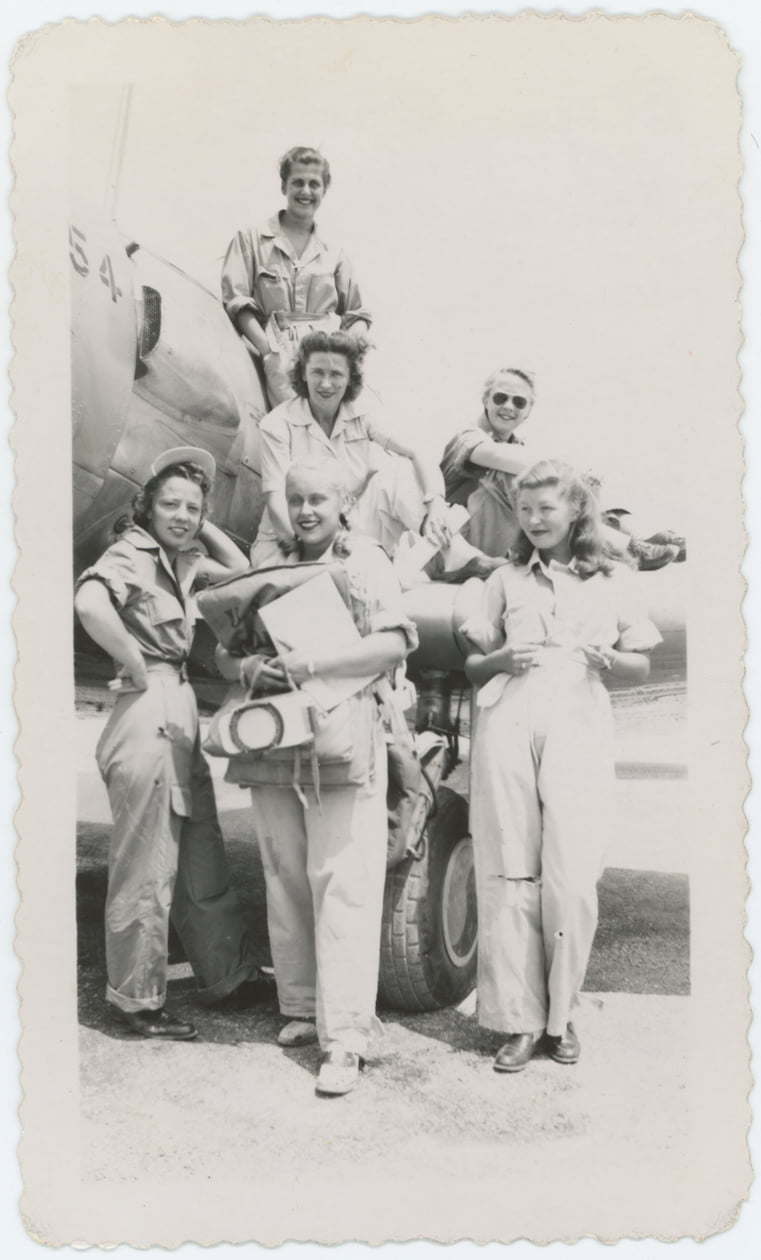 Inscription on back: “Beejay Overman, Nancy and me – simpering me in front. Ann Pedroncelli (ugh), Duffy – instructor, and Vivian Williams.”

Sources:
Texas Womens University
WASP Final Flight
Wings 144 Blogspot
The Portal to Texas History Booklet filled with correspondence, documents, and photos from Betty J. Overman Brown’s entry into and time spent training in the Women’s Airforce Service Pilots program. A handwritten note can be seen left of the last photo in book, labeling Brown at the Tattoo Ceremony at Randolph Field in 1992.