In 1937, Betty graduated from Castlemont High School and went to work as a private secretary in downtown Oakland. While in high school, Betty was the editor of the school newspaper and yearbook.

In 1941, she applied to the Civilian Pilot Training program where she earned her private pilot license at West St. Airport in Concord. Her flight training at Concord was paid for by a scholarship she won in a competition sponsored by the Oakland Chamber of Commerce. After the bombing of Pearl Harbor, her flying had to be done high in the mountains of Plumas National Forest at Quincy, CA.

After accumulating 75 hours of flying time and upon hearing about the women’s flying program being started by Jacqueline Cochran, Betty wrote for information on the program. The reply she received was a request to head for training in Houston Texas.

Deuser joined the third class of 58 trainees in January 1943. She completed training in Houston and Sweetwater, Texas, before being assigned to Camp Davis.

Her initial assignment after graduation on July 3, 1943, was to Love Field, Dallas, TX. She was only there a few days when she, the two Lois’ and Emma were called to Washington, DC to meet with Jackie Cochran and General Hap Arnold. Here they found out that they were not going to be ferrying new planes. The program was being expanded to use these women for other tasks. By the end of July, 1943, they were reassigned to Camp Davis, NC, flying tow target for anti-aircraft troop training.

Tow Target pilots flew the planes from the front cockpit while an enlisted man sat in the rear cockpit to control reeling out the 36-foot target behind the plane. They would wait for direction from “Sugar Charley”, the ground control officer, and fly back and forth perpendicular to the artillery range to allow the gunners the opportunity to hit the target behind the aircraft. This could go on for hours with occasional changes in altitude to accommodate the different weapons firing at the target from machine guns to 90MM cannons. (The planes they flew were rejects from the war, deemed unfit by the Navy.)

At Camp Davis, the WASP weren’t allowed to get in the cockpit for weeks.

“Criminy we thought we were through training, but the men just don’t believe we can do anything till they check us out,” Deuser wrote in an August 1943 letter. “[They] have an AT17 here and we have to be checked out. Well, most of us have about 50 hrs in it … We should be checking the instructors out. And that’s not bragging.”

For the most part, the flying was boring. Deuser and her fellow WASP spent hours towing a 36-foot target over the artillery range as trainees fired at it from the ground with anti-aircraft guns.

But that didn’t mean it wasn’t dangerous. The planes were unfit for combat duty, and there was a shortage of parts. Thirty-eight WASP were killed, including 26-year-old Mabel Rawlinson, whose plane crashed during a night training flight at Camp Davis.

Deuser wrote about a second crash at Camp Davis in a September 1943 letter: “Twenty minutes later another siren blew. It just goes thru me when a siren goes off cuz we know something’s happened. A girl (one of the 4th class) cracked up after landing. Killed. … I don’t remember the girl very well. It’s funny how it doesn’t seem to affect most of us anymore. People get hardened to it, I guess. It made me sick to think of it and I felt all upset, but the other kids discussed it and I felt childish, being so affected.”

In September, 1943, they began training on the PQ-8 to support the secret radio control program. The PQs were used for targets and the WASP has to learn to fly them remotely. Within a month, Betty and the others were relocated to Liberty Field, Hinesville, Georgia. During one of the test flights, a pilotless radio-controlled PQ-8, was hit by shrapnel but continued to fly. They had lost control of it and it eventually crashed. A farmer saw the crash and organized a search party to look for the pilot. Of course, they never found one.

Along with training on the PQ-8, Betty also logged time with the A-24 Douglas dive bomber, A-25 Curtiss Helldiver, B-34 Lockheed bomber and various Beechcraft AT’s.

When flying was limited due to weather or other circumstances, Betty would help out around the airplane modification shop. She helped the mechanics install the overpower units in the PQ-8s, which allowed any onboard pilot to override the radio control if needed.

Eventually, Betty, Lois H, Lois B, Emma and others from 43-3 were sent to Biggs Field, El Paso, TX. They were there for about a year, when the WASP were disbanded to make room for the men coming back from the war.

In January, 1944, Betty married Sergeant Fred Budde. In the summer of ’45, they moved to Victorville, CA., and went on to raise four sons. 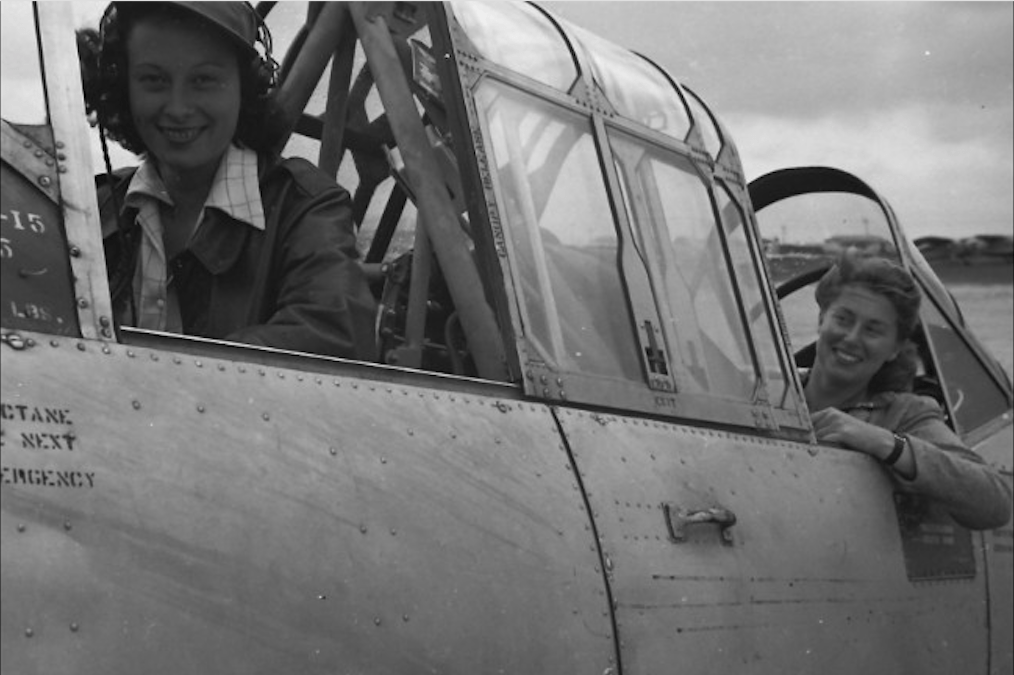