Betty was the daughter of Thomas R. and Effa M. Taylor and resided in Athens, Menard Co IL in her early life.

Betty finished her senior year at Placer Union High School and then began studies at Placer Junior College, now known as Sierra College. It wasn’t a long commute between classes, the college and high school shared some of their facilities and a few of their instructors. While Betty studied, she worked as a store clerk and as an assistant in a doctor’s office. She enrolled in the Civilian Pilot Training program at the college and learned to fly. A fellow student later remembered her as the most natural pilot enrolled in the class. Her application to the WASP program was accepted and Betty reported to Houston to begin her training with the 43-W-4 class on February 14, 1943 at Avenger Field, Sweetwater, TX and graduated on August 7, 1943. 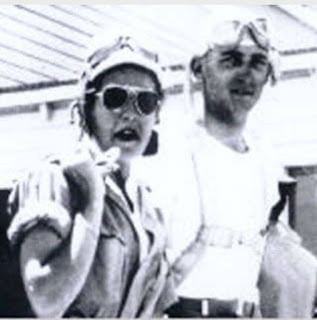 On the day she graduated at Avenger Field with class 43-W-4, August 7, 1943, Betty Louise Taylor married one of her civilian flight instructors, Harry “Shorty” Wood. Harry got his nickname for the not so obvious reason—he was very tall. Regulations forbid trainees from dating flight instructors, but Betty and Harry’s wedding proved that love would top any military regulation every time.

Twenty-one-year-old Harry was born in Colorado and he attended Fort Collins High School. After graduation, he enrolled in Colorado State College, learning to fly in the college’s extensive Civilian Pilots Training program that included advanced training and cross-country flights. After training in Texas, he qualified as a civilian flight instructor.

Betty was born in Illinois and she grew up near Athens, a small community in the central part of the state. In 1940, while still a high school student in the nearby community of New Berlin, Betty’s parents moved the family west and settled in Auburn, California.

After their honeymoon, Harry returned to his training assignment at Sweetwater, while 22-year-old Betty headed for her duty station with the 5th Ferrying Group in Dallas. Initially scheduled for transition training to heavier aircraft, by September, new orders had assigned her to Camp Davis.

On September 23, 1943, while making a landing following two hours of flying, one of Betty’s wings touched the ground, forcing her to abort. Observers on the ground thought they heard her engine surge and cut out. They believed Betty was giving her A-24 full throttle, trying to climb and make a go-around attempt, but the throttle must have been sticking. One reported cause of the crash was sabotage; sugar in the fuel tank. Another explanation was that the throttle was ‘sticky’ and this caused a late, sudden surge of power that torqued the aircraft over. This combined with Betty’s pulling up on the stick pushed the A-24 into the ground.

The plane struck an embankment, the engine stalled, and the plane rolled over onto its top, crushing Betty. It was just 47 days after her marriage to Shorty, her husband and flight instructor.

There was a delay in returning Betty’s remains to California and she didn’t arrive until after the memorial funeral service held in Auburn. Her parents chose to have her cremated and then interred in the mausoleum at East Lawn Memorial Park, in Sacramento.