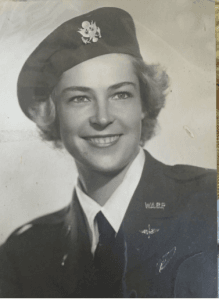 “We were given the opportunity to fly wonderful aircraft that women hadn’t flown. We were the experimental thing.”

Beesemyer, born in Hollywood and raised in Beverly Hills where her father was a dentist, attended USC and then art school, seeing her future in painting and drawing.

But when World War II broke out, she, like millions of other women and men, sought a way to join the war effort. Women were barred from enlisting in the military, so she took a job at Lockhead Aircraft Co. in Burbank, California, working as a dispatcher and expediter. Then, in 1943, she heard about a little-known opportunity for women to aid the U.S. Army.

With so many experienced pilots assigned to the war zones, the Army needed flight trainers. Only women who already knew how to fly could qualify, so Beesemyer took a leave of absence from Lockheed, paid for flying lessons and achieved the minimum 35 hours of flight time. Soon enough she became one of the few accepted for Army training at Avenger Field in Sweetwater, Texas. 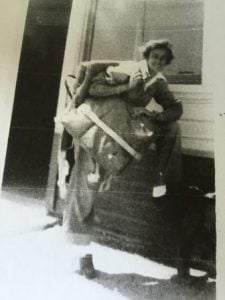 They were Civil Service employees, not military, and had to pay their own way to the base, among other expenses.

Beesemyer recalls getting off the train from California wearing a dress and high heels and, along with other WASPs, climbing into the cargo trailer of a semi-truck. Once on the base, they lined up to receive their flight clothes, parachutes and other equipment.

Among other things, Beesemyer trained male pilots to use machine guns to attack enemy aircraft. “I towed targets and they fired 50 caliber machine guns at the sock (target) I was towing,” she said during an interview at her home.

Her plane was hit by errant fire once, but she wasn’t injured. But 38 of her colleagues died between 1942 and 1944 while transporting aircraft, conducting training or other military work.

It was a big disappointment in December, 1944, when the Army disbanded the WASP program, saying the war was winding down. “They said ‘we don’t need you anymore’ and they dumped us,” she said.

It wasn’t easy, but after the WASPs were disbanded, Beesemyer wasn’t done flying. She eventually found a job as a flying instructor at the airport in Monrovia Airport in California, flying and then to ferrying planes from the factory to their destination. 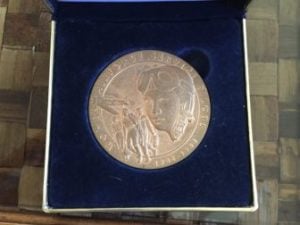 She and a partner also began an employment agency business, but then came the Korean War. Even though she wasn’t an official World War II veteran, when she left the WASPs she was offered an inactive reserve commission.

In 1951, “they drafted me back,” she laughed. The military didn’t want her to fly but they did use her as an administrator at a base in Marin County. After that war, Beesemyer and her business partner successfully ran the Beverly Hills employment agency they created.

Her uniforms and some other wartime memorabilia were donated to the Lyon Air Museum at John Wayne Airport in Santa Ana.

Although Beverly lobbied for the right of WASP to be interred at Arlington, her wish was to be cremated and have her ashes scattered at sea. She was a boat owner and loved sailing.