She attended UCLA. On 25 April 1943, she entered AAF flight training at Avenger Field, Sweetwater, Texas, and graduated 9 October 1943. She was stationed at Dodge City Army Air Base, Kansas, and at Harlingen Army Air Field, Texas.

The fifth WASP to lose her life in June was Bonnie Jean Welz (43-W-6), who crashed into the Texas dust just a week after celebrating her 26th birthday. Redheaded 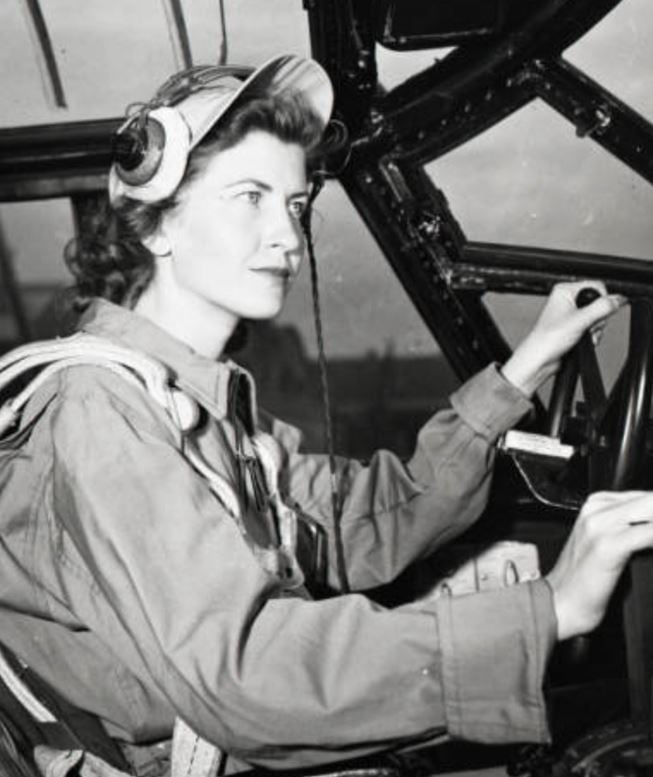 Bonnie was the fourth child and fourth daughter of Lee and Grace Alloway. When she was 4 years old, her father died, and by the time she graduated from high school, her mother had already remarried twice and was about to remarry again.

Bonnie’s first assignment was Dodge City Army Airfield in Kansas, where she received transition training in the B-26 Marauder, a medium, two-engine bomber. It was 75 hours of flying instruction, 30 as a copilot and 45 hours as first pilot. In addition to ground school and Link training, the flying included nine hours at night, 20 hours on instruments, and 10 hours on navigational flights. The program had two main purposes—teaching the women to fly heavier aircraft, especially for tow target flying, and developing a program to show fearful male pilots that the B-26, known as the “Flying Coffin,” was safe.

Just past 11 in the morning, June 29, 1944, Bonnie took off in a BT-13 trainer on a “routine administrative cross-country flight” across the West Texas oilfields, bound for Laredo, Texas. Her passenger was Major Robert Stringfellow.

After about an hour in the air and 40 miles short of Laredo, something happened—and no one was really ever sure what it was. Stringfellow, sitting in the rear cockpit with his canopy open, said they were flying at about 1500 feet when he noticed Bonnie had entered a slow turn to the left and had begun a slow descent. Her cockpit canopy was closed. There seemed to be nothing out of the ordinary and Stringfellow thought she was probably lining up for a normal landing, but there was no conversation between them. On the ground, Lloyd Staggs saw the plane coming down in a wide circle, and to him, it sounded like the throttle was wide open. The plane disappeared behind some trees about a mile away and exploded in a fireball. Staggs raced his truck to the scene and found the BT-13 engulfed in flames and lying on its back. About 50 yards away, a seriously injured and confused passenger was pointing at the wreck and mumbling something about “her” and “she.” Trapped inside the flaming cockpit, it was impossible to rescue Bonnie.

Thanks to Andy Hailey for sharing this information!

One of the first contacts I had from my website was a witness to the aftermath of Welz accident. He was a young boy and never knew the name of the women pilot who died on his brothers property: https://www.wwii-women-pilots.org/bonnie-jean-welz.html