Johnson was born in Longview, Texas on August 30, 1927, and raised in Shiloh, Texas, graduating from the Shiloh High School in 1945.

When Johnson was 18 years old, the U.S. Military drafted him into the U.S. Navy. At the time, the only tasks that African-American men were allowed to do in the Navy were menial jobs, which he was not interested in doing. He learned that volunteering for a three-year tour of duty in the U.S. Army would supersede the draft orders, so Johnson instead enlisted in the U.S. Army Air Force in 1945. He became one of the first African-Americans allowed to work on U.S. fighter aircraft.

Johnson did his Basic Training at Sheppard Field Texas. Upon graduating, he was assigned to the 99th Fighter Squadron of the 477th Composite Group which was stationed at Godman Field, Kentucky.

In November of 1946, the 477th Composite Group was reassigned to Lockbourne Army Air Base. At this time, Mr. Johnson was assigned to the flight line for training in the repair and maintenance of the Republic P47N Thunderbolt. The Composite Group was inactivated in 1947, and the 332nd Fighter Group was reactivated with the 99th, 100th, and 301st Fighter Squadrons. Buford’s P-47N was one of 4 aircraft chosen to be in the First Annual USAF Gunnery Meet being held at Nellis Air Force Base where the 332nd Fighter Wing won first place in the Conventional Aircraft Class. In 1949, the 332nd Fighter Wing was deactivated.

Technical Sergeant Buford Johnson ended his combat tour in Korea on December 19, 1951. In January 1952 he was assigned to the 6520th Test Support Wing, Air Force Cambridge Research Center, Hanscom AFB, Bedford, Massachusetts as an Aircraft Maintenance Supervisor. On April 1, 1953 Technical Sergeant Buford Johnson was promoted to Master Sergeant after Serving seven years in the USAF. Unheard of in the Air Force today.

Master Sergeant Buford Johnson remained at Edwards Air Force Base until July 1965 when he was assigned to Oxnard Air Force Base, California as the Non-Commissioned Officer in charge of Maintenance Control, where he remained until his retirement in August 1966.

For sixty years the sacrifices, brave and historical contributions of Johnson and the other Tuskegee Airmen went largely unnoticed by the nation…until, finally, on March 29, 2007, President George W. Bush presented the Congressional Gold Medal to nearly 300 of the Tuskegee Airmen at the U.S. Capitol.

Johnson was unable to attend the ceremony in Washington that day; however, on June 9, 2007, he received his Congressional Gold Medal during a ceremony at the March Field Air Museum in Riverside.

In 2014, Johnson participated in an event honoring veterans at Rancho Cucamonga High School. During his presentation, as reported by the Inland Valley Bulletin, he talked to the students about the obstacles he faced while serving in the military and encouraged them to, “Never give up, don’t quit.” In addition, he stressed the importance of believing in yourself as well as an aim.

That day, Johnson proudly told the students, “There are people who came before me, opened up the door for me, that can’t come…I want to tell them to pass on the legacy of [the] Tuskegee Airmen.” 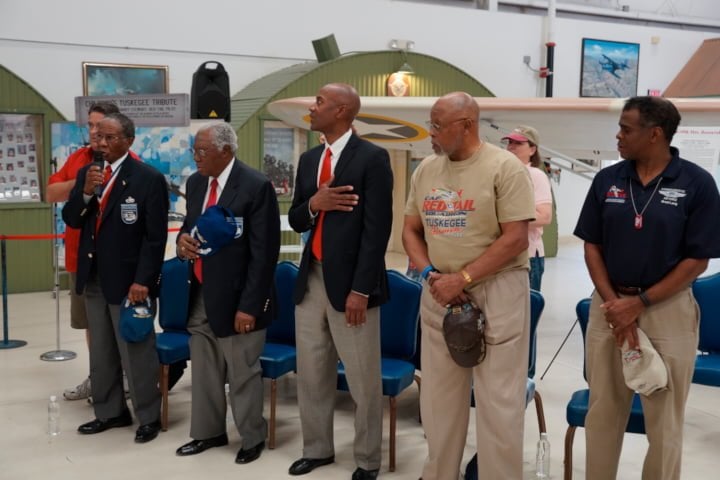