By Woodie Sprouse, Wing Leader of the CAF Florida Wing and Darcy Castro, PR and Communications Coordinator for the CAF Red Tail Squadron. This article appeared in Dispatch, the monthly print magazine of the Commemorative Air Force.

The CAF’s Florida Wing and Red Tail Squadron recently teamed up to bring the Squadron’s RISE ABOVE Traveling Exhibit, along with their P-51C Mustang Tuskegee Airmen, to the Florida Wing’s hangar in DeLand, Fla. Several days were designated for local school and youth groups, followed by an open house for the general public. It was a unique opportunity for all ages to experience the inspiring story of the Tuskegee Airmen – America’s first black military pilots and their support personnel.

The final event attracted many visitors and supporters of the CAF, and was the perfect setting for the conclusion of the dream of long-time CAF supporter Mr. Harry Van Iderstine.

Van Iderstine, a retired businessman and aviation enthusiast from New Smyrna Beach, Fla., watched as the crowd of friends and visitors slowly took their places in front of the Florida Wing’s shiny silver Beechcraft T-34A USAF trainer. Parked nearby was the Red Tail Squadron’s famous P-51C Mustang – the carefully restored and proudly maintained signature aircraft of the Tuskegee Airmen. Van Iderstine has a deep affinity and respect for the Tuskegee Airmen and the events of this day would be the conclusion of a dream that he had held close for so many of his 85 years. 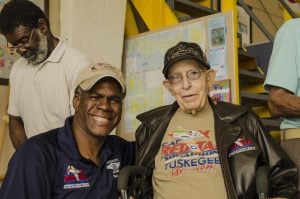 “The Red Tails were my kind of guys. They went through all sorts of adversity and they were my heroes,” said Van Iderstine. “What the Red Tail Squadron is doing is great and I hope they get the opportunity to change lives with their message.”

Born in Dennis, Mass., Van Iderstine served in the US Army during the war. After leaving the service – and as family, time and career permitted – he pursued his love of rare and exotic automobiles and in 1949 began his pursuit of collecting and restoration. Over the years, his home became the stable for the finest of those rare mechanical thoroughbreds such as the Cord, Bentley, Rolls-Royce and Duesenberg.

At the age of 70, Van Iderstine took the next big step and obtained his private pilots license and in 2000 purchased a Cessna 182. Not one to rest, he purchased a restored T-34A in 2001 and two T-34B’s in 2002. Flying became his second passion and he loved it. However, as time passed and his health became an issue, he flew less and less. Still he loved to be near the sound and smell of airplanes.

As luck would have it, fortune smiled on Van Iderstine during an airshow in New Smyrna Beach, Fla. when he met Brad Lang, CAF Red Tail Squadron Leader and son of a Tuskegee Airman, who was flying the Squadron’s P-51C Mustang. The emotional connection between the two was instantaneous: they were men who loved flying…one aging, one young…one white, one black.

It was there that Van Iderstine’s dream took shape. The story of the Tuskegee Airmen – their perseverance, drive, strength to endure bias and their love of flying – struck a chord within him and a dream began. It was a dream that coincided with the Squadron’s mission to share the history and legacy with all children, regardless of race. Van Iderstine knew this new connection to Lang and the Red Tail Squadron’s mission was not a passing impulse. Lang personified those young black aviators who so long ago demonstrated that if you put your mind to a task and stuck to it, anything could be accomplished. It was the story of the Tuskegee Airmen and ensuring it was told to America’s children became his dream. 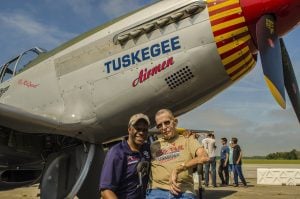 Over the years, Van Iderstine remained close to Lang and the Red Tail Squadron. His support for their efforts never wavered. Then one day in December 2013, Harry’s longtime friend Art Patstone, a Colonel in the Florida Wing of the CAF, suggested to Van Iderstine that he consider donating his three T-34’s to the CAF. He agreed to donate the three aircraft, but with one hard and fast stipulation: his T-34A, which had been repainted with the distinctive red tail, must be assigned to the Red Tail Squadron.

Fast forward to this past March in the CAF Florida Wing hangar. Van Iderstine sat watching the visitors and friends of the CAF gather, knowing that his dream was now a reality. Lang was there beside him and together they shook hands on the symbolic physical transfer of the aircraft. Van Iderstine presented Lang with the CAF Wings decal logo, which adorns all CAF aircraft, and in that moment, the dream was realized. 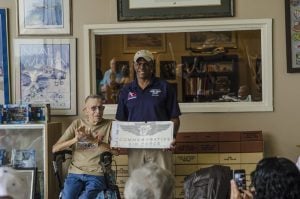 Van Iderstine’s Red Tail T-34A will now take its place beside the Red Tail P-51C in its new home at the CAF Headquarters at the new CAF National Air Base in Dallas. This beautiful gesture is another example that if you put your mind to a task, it can be accomplished! On behalf of the CAF’s Red Tail Squadron and Florida Wing, thank you Mr. Van Iderstine for your generous gift, which will provide inspiration for generations to come. 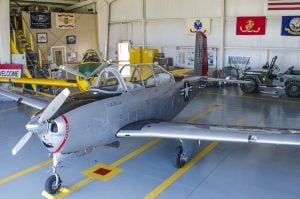