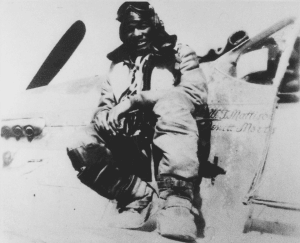 Calvin J. Spann was an original Tuskegee Airman and fighter pilot with the 100th Fighter Squadron of the 332nd Fighter Group. Spann received his wings from the Tuskegee Flight School as a part of the graduating class of 44G. As a member of the United States Army Air Corps, he served in Europe during World War II, where Spann flew 26 combat missions before the end of the war in the European Theatre.

During Spann’s wartime service (1944–1946), he was assigned to the 332nd Fighter Group under the command of Col. Benjamin O. Davis Jr., who on September 2, 1941, was the first African American officer to solo an aircraft under the U.S. Army Air Corps. Davis would later rise to the rank of General in the United States Air Force.

While assigned to the 332nd, he flew in the longest bomber escort mission of 15th Air Force, a 1600-mile round trip mission on March 24, 1945 from Ramitelli, Italy to Berlin, Germany to destroy the Daimler-Benz manufacturing plant.  During that same mission, Calvin and his squadron commander, Captain Roscoe Brown, engaged one of the new Nazi M.E. 262 jet fighters with their P-51 Mustangs, and Roscoe became the first black pilot to shoot down one of the new German jets.

Despite this achievement, after his military service, Spann found it difficult to obtain work as a pilot. The racial climate of America at the time was not friendly despite Spann’s worthy credentials and service to the country. Spann eventually settled in New Jersey, raising three children and excelling in pharmaceutical sales. He also owned a restaurant and bar along with a real estate business. 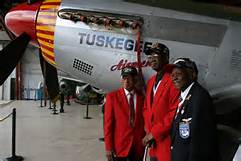 Later in his life, Spann spoke at schools, churches and organizations about the Tuskegee Airmen experience and how their courage and valor helped them to triumph. During these speeches, he encouraged students to make a commitment to excel in the study of mathematics and science, and reminding them that through preparation and perseverance they can succeed.

In 2006, Span was inducted in to the New Jersey Aviation Hall of Fame. In March 2007, President George W. Bush collectively awarded the Tuskegee Airmen the Congressional Gold Medal. The Airmen received bronze replicas of the medal, the original gold medal is on display at the Smithsonian.

Spann died on September 6, 2015 at the age of 90 in McKinney, Texas, where he had moved in 2006 to be close to his daughter, Carla Spann and his grandchildren. He is buried in East Ridgelawn Cemetery in Clifton, New Jersey.