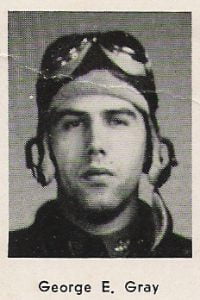 George Elbert Gray (as a pilot also known as “Geo” and “Jive”) was born in Welch, McDowell County, West Virginia and grew up an only child in the community of Hemphill on the Tug Fork River. His father George N. Gray was from Tazewell, VA and a Machine Man in the coal mines of WV. His mother, Addie DeHart Gray, hailing from Radford, VA was a homemaker and full time maid outside of the home.  Schoolwork was stressed and many times his mother kept him on their porch while the other children played in order to see to his studies first.  He was still very athletic and enjoyed swimming, baseball and football. In June 1938 graduated from the Kimball Negro District High School in Kimball, WV. During his time there he was a captain on the football team, the ‘Terrors’.

A longtime mentor and supporter of his was Mr. James C. Evans who was working at West Virginia State College in Institute, WV when George began his studies there.  Evans was a 1925 graduate of MIT in Electrical Engineering, and a teacher & administrator at the college in WV before eventually moving to the Washington, D.C. area in 1942 and becoming a civilian aide in the War Department for Negro affairs. In 1939 he acquired approval to establish a Civilian Pilot Training Program (CPTP) at the college.  In 1940s, he had worked on plans to place more African Americans in military pilot training programs and moreover on early efforts to integrate the armed services. Later he became civilian assistant to the U.S. secretary of defense thru the early 1960s.

The bold, devoted and patriotic students of the new CPTP program took to their work intensely. For George, flying became his first love. Seventy students were in the program there from 1939 to 1941 enrolled in Units I – VI. In the fall of 1940, young Mr. Gray was part of Unit V consisting of 10 students total. “This unit’s work was characterized by high achievement and high grades on final examinations”. He subsequently received his private pilot’s license December 1940 [Piper Cub]. George Spencer “Spanky” Roberts preceded him in Unit III. 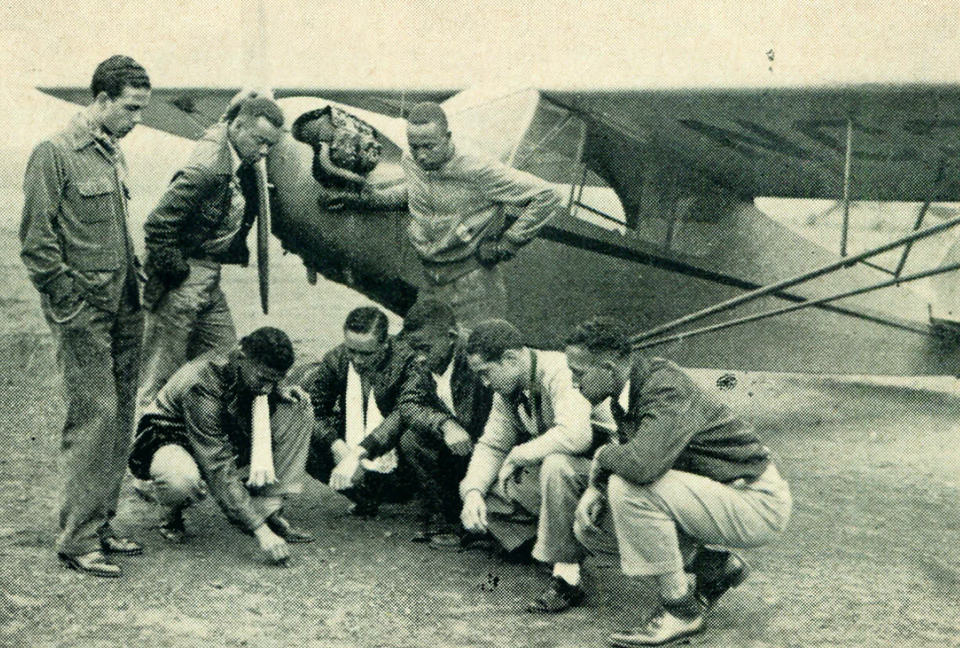 He then resided in Washington, DC and worked at the U.S. Naval Powder Factory in Indian Head, MD from November 1941 until his enlistment at Bolling Field in September 1942 and appointment as an Aviation Cadet. He completed pilot training on May 28, 1943 as a member of class 43-E-SE [PT-17, Vultee BT-13, and AT-6/T6 Texan]. 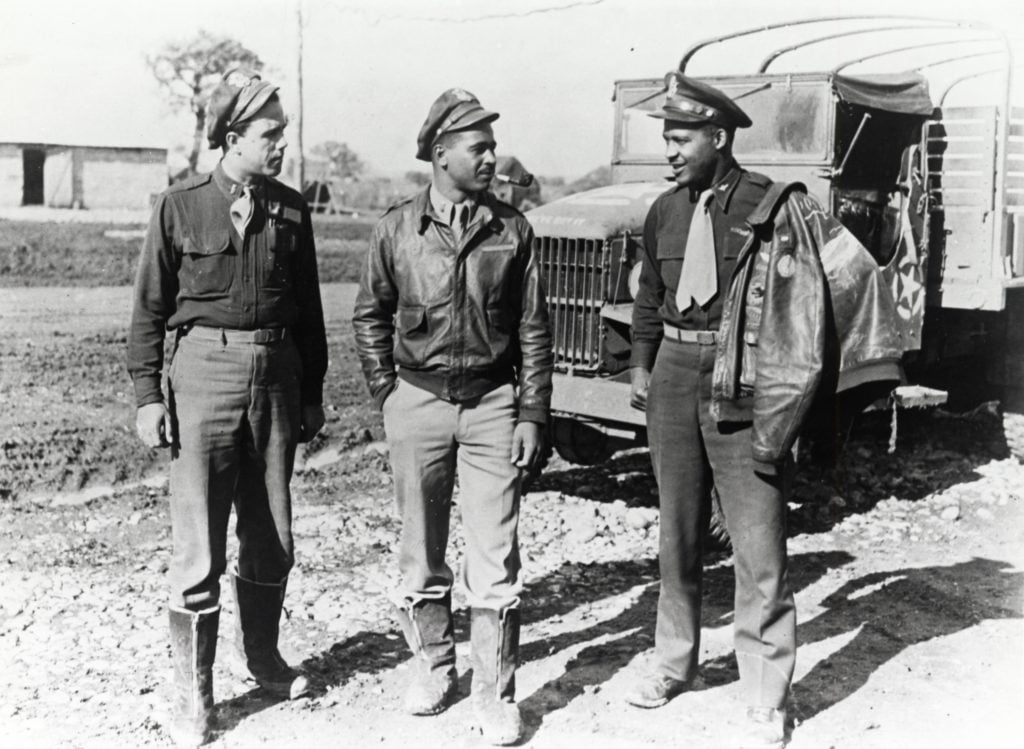 It was at TAAFS that he stating courting his future wife, Ms. Loretta Sandros of Montgomery, AL. At a local dance for service members, he introduced himself by reminding her that he had seen her before. She’d been a student at West Virginia State College at the same time as him. He of course was consumed with flying, but at that time he also thought for some reason that he would one day marry her. She was very independent, intelligent and attractive. The romance started and the flying continued. 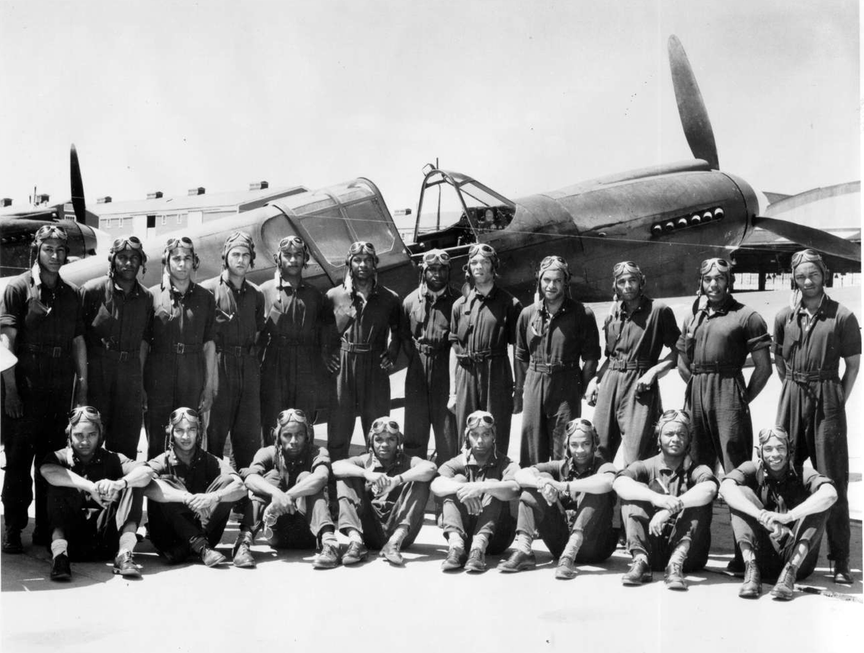 On August 5 with the 100th FS, tragedy almost destroyed the dream of these newlyweds. While on a night training flight, his plane [P-40F, Ser. # 41-14340], experienced engine failure and crashed 6 miles NW of Marine City, MI. The young 2nd Lieut. suffered minor injuries when he parachuted to safety. 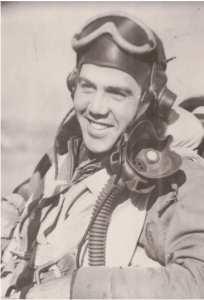 On January 3, 1944 George departed the U.S. via Hampton Roads Port of Embarkation in Virginia bound for the Mediterranean Theater of Operations (MTO). He and others were to report as replacement pilots with the 99th FS. Stationed at the Capodichino Airfield from February, their duties included flying reconnaissance, dive bombing, and strafing missions [P-40].  National Archives film shows George present when General Ira Eaker inspected the 99th Squadron in April 1944 (National Archives Identifier: 3815 Local Identifier: 18-CS-1221

By July, the 99th FS physically combined with the rest of the 332nd Fighter Group [P-51].  On October 11, then 1st Lt. Gray, flew a strafing mission as a member of the 99th Fighter Squadron, for which he was awarded a Distinguished Flying Cross. This was presented by Brigadier General Dean C. Strother, XV Fighter Command on New Year’s Day, January 1, 1945 to George and pilots Lee Rayford, Andrew D. Turner, William A. Campbell, Melvin T. Jackson, Vernon Haywood, and Dudley Watson.

On 21 October 1944, he was one of four Flight Leaders on the 332nd FG’s 100th mission. He participated in the Anzio, Rome-Arno, Southern France, Air Offensive Europe and Naples-Foggia campaigns.  After 102 Combat missions, he returned from the European Theater of Operations (ETO) to the States in February 1945. Now a Captain, he served as a Flying Instructor at TAAFS.  For a brief period in 1946 he reported to the 477th Composite Group at Lockbourne Army Air base to assume the role of base police and prison officer. This was by the request for emergency detached service by base commander Col. Benjamin O. Davis, Jr. In September 1946 he was enrolled with other 332nd pilots at Howard University in Washington, DC completing coursework towards a degree in Physics while retaining his yearly flying proficiency of 100 hours at nearby Andrews Field, MD [P-51].

From March 1948 he attended the Chanute Field Air Weather Service School. As the only African American in his class of 150 students, this was part of a direct effort to integrate various departments of the armed services. This was listed under “Integrated USAF Officer” in Air Force memos concerning him.  After successfully completing the course, in November Capt. Gray reported to the Master Air Weather Analysis Service in the Pentagon Building, “the first Negro weather officer to receive such an assignment”. James C. Evans was present when he officially reported for duty. From his superiors’ Reports of Officer Effectiveness on him, it can be confirmed that George was an excellent officer and very capable in his new role, but that flying is all he really wanted to do. His wife Loretta wholeheartedly agreed as she saw George constantly take steps to get closer to any cockpit.

He completed jet pilot training by the December 1949 [F-80, T-33]. At that time, his desires as to future paths in the Air Force listed in documents included Jet Instructor 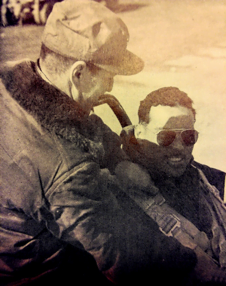 School, Experienced Pilot School, Flying instructor, Test Pilot, National Guard and no mentions of any continuation in Weather.  He also noted that he did not desire to be posted in the deep South or Southeast due to racial discriminatory practices. Furthermore, he was missing combat.  At this time he and Loretta resided in NW Washington, DC.  They had and would make frequent visits to New Orleans, LA where Loretta’s family had settled.  Additionally, George’s mother Addie would visit her son and daughter-in-law in DC and other DeHart cousins from Radford, VA who had moved there for employment. Loretta noted that George was always very excited when his mother was coming for a visit.

On June 25, 1950 North Korea invaded South Korea. On October 20, 1950 Capt. Gray submitted a Request for Transfer to the Chief of the Air Weather Service for assignment as a Fighter Pilot. In December, George reported to the Fighter Gunnery School at Nellis AFB, NV [F-51 Mustang] completing that course on February 21, 1951.

On March 24, 1951 he finally joined the 12th Fighter Bomber Squadron of the 18th Fighter Bomber Wing in Korea commanded by Col. T. C. Rogers. Known as the Truckbusters for their copious destruction of North Korean and Chinese People’s Volunteer Army (PVA) trucks, other enemy vehicles and material using the F-51. Also labeled as the “The World’s Best Damn Fighter Group” with their HQ affectionately known as the Dogpatch. This wing was running combat sorties around the clock for interdiction, close support, reconnaissance and more.

Major Richard M. Perkins gave George his local flight of .05 hours on March 26, 1951 to familiarize him with the local area. The Major noted that the Captain had just completed Combat Crew Training at Nellis AFB and certified him proficient and cleared to fly combat missions. To put the danger into context consider Major Luis J. Sebille, the first person in the U.S. Air Force to be awarded the Medal of Honor. He was reportedly on his fifth mission of this conflict in 1950 when he gave his life in the action that awarded him that honor posthumously (18th FBW, Pacific Stars and Stripes, July, 15 1951, p-8).  In late April, fellow Red Tail and 18th FBW F-51 pilot Graham “Peepsight” Smith was also lost over Korea. 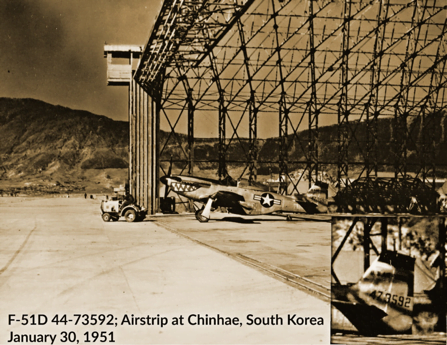 “Captain Gray departed and air base near Pusan, Korea on April 5, 1951 on an armed reconnaissance combat mission over North Korea.  Having completed the primary mission, the flight was strafing enemy troops about 5 miles south of Pyongyang.  During the attack at 5:25 P.M. Captain Gray carried a firing pass to an extremely close range and was unable to recover.  His aircraft struck the ground in wing level attitude, an explosion occurred, and the plane disintegrated.  A search was made to determine whether the pilot survived, and although it could not be definitely confirmed, it was agreed by all making the search that Captain Gray apparently did not bail out. ” (From a letter from Col. T. C. Rogers, USAF to Mrs. Loretta Gray, April 22, 1951) [F-51D Ser. # 44-73592]

Loretta Gray learned of this first on April 7 via letter from the Air Force with follow up on April 20 when Chaplain Maurice A Johnson (Major) USAF telephoned her. She then left for New Orleans to be with her mother to await any further possible news about George. Sadly, his status was changed from Missing to Killed in Action in March 1952. This was devastating to family members who had held out hope that George had somehow survived and was a POW. His wife selflessly gave his death gratuity/benefit to his mother Addie. On April 11, 1952 Loretta received his Purple Heart on his behalf. She led a rich full life as only an independent soul should. She had been working for some years in the U.S. Department of Commerce, Bureau of Census receiving awards including one for Distinguished Service in 1956. She eventually settled in Southern California near close friends and family. She passed away in September 15, 2017 at the age of 95. “If I could only have my George one more time” she would often say to me. Though 65 years separated them he was still so very close in her heart and mind.

His remains were not recovered. He is memorialized on the Courts of the Missing at the National Memorial Cemetery of the Pacific, Honolulu, Hawaii. It is hoped that we may one day identify his remains and return him home.

Based on all information available, DPAA assessed the individual’s case to be in the analytical category of Deferred.

Preserving this history has been vital to our Family’s history. I grew up hearing my grandfather speak highly of his 1st cousin and in turn my father. Cousin Gray’s photo could be seen in the homes of our grandmothers and aunts. We are always seeking to know more about his life that was cut so very short.

Thank you to Joseph J. Snell, cousin of Capt. George E. Gray, for researching and submitting this profile!

Be sure to see these artifacts submitted by Mr. Snell in the Virtual Museum!