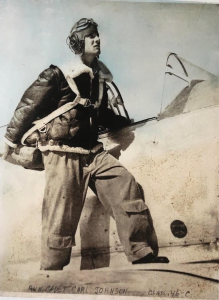 Carl Johnson was born in Bellaire, Ohio, where he grew up right across the river from Wheeling, W.Va. His high school was integrated and so was the campus at Ohio State, which he attended until he was drafted in 1945.

He was officially inducted into the US Army Air Force at Fort Hayes in Columbus, Ohio.

Initially, the USAAF assigned Johnson to bases in Texas and Indiana. In early 1946, the USAAF admitted Johnson and 14 other African American draftees into its Tuskegee Army Air Field aviation cadet program Class SE-45-I. Unaccustomed to rampant Jim Crow segregation common in the deep southern United States, Johnson, armed with a train ticket on the more luxurious Pullman Porter sleeping train car, was placed in a segregated coach seat behind the train’s hot engine, ending his trip to Alabama covered in soot. Johnson was also prohibited from the train’s dining car based on race.

Johnson contracted appendicitis during training, and was unable to graduate with Class SE-45-I on January 29, 1946. Concerned that the USAAF would terminate him from the program with dozens of other aviation cadets, Johnson continued his training after a two-week convalescence and a weekend pass to Atlanta, Georgia. Tuskegee aviation instructors had notified the commanding general that Johnson would be the program’s very last cadet. In October 1946, Johnson graduated from Tuskegee’s Class 46-C Twin Engine Section as the final aviation cadet, receiving his wings as a Flight Officer.

After Johnson’s graduation, he was assigned to Enid Army Air Field in Oklahoma. He was then assigned to Lockbourne AFB in Columbus, Ohio as a member of the 477th Bombardment Group Composite’s 617th Bomber Squadron. In 1947 he was discharged. In 1947 while a student at Ohio State University, Johnson joined the Ohio National Guard as a member of its only African American unit.

Johnson later returned to active-duty service as a U.S. Army aviator during the Korean War.

During the Vietnam War, Johnson commanded a seven-company aviation battalion. He served as Commander of a US Army Aviation Battalion in the Republic of South Korea. Johnson retired from the US Air Force with the rank of Colonel after 31 years in the U.S. military.

After his retirement from the military, Johnson served at the Federal Aviation Administration and the US Department of Defense.

He is former Cleveland, Ohio Airport Commissioner and deputy director of the Pittsburgh International Airport.

Johnson resides in the Potomac Green community of Ashburn, Virginia 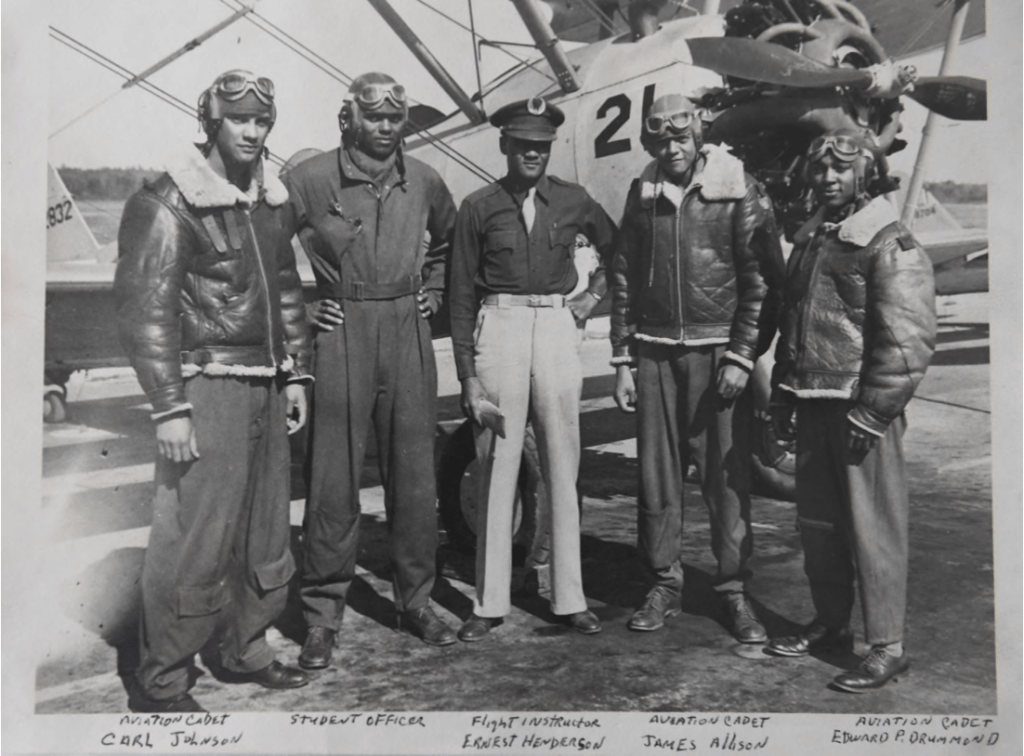 In 2007, Johnson and other Tuskegee Airmen were collectively awarded the Congressional Gold Medal. Johnson was among 300 black aviators, most of them in their 8os, who gathered in the Capitol Rotunda to receive recognition for their service.

“You showed America that there was nothing a black person couldn’t do,” said former secretary of state Colin L. Powell, a retired Army general who served as the country’s first black chairman of the Joint Chiefs of Staff.

President George W. Bush acknowledged the terrible racism that all the Tuskegee Airmen had endured.

“For all the unreturned salutes and unforgivable indignities. . . . I salute you for your service to the United States of America,” Bush told them.

The commander in chief saluted them. And Johnson and the other aviators got to their feet and saluted back.