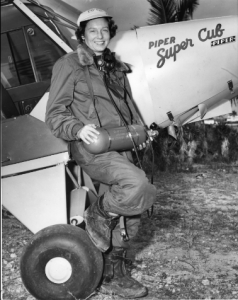 In May of 1943, Caro traveled to Sweetwater, Texas, where she entered the Woman’s Airforce Training Program (WASP) as part of Class 43-W-7. She received her silver wings at graduation in November of that year. Reporting to Biggs Field in El Paso, Texas, she was part of a B-25 two target squadron. While serving in the military, she flew the SBC Dauntless, SB2C Helldiver, AT-6, AT-7, AT-11, BT-13, PT-17, P-47 Thunderbolt, B-25 Billy Mitchel Bomber and the B-26.

In January of 1945, Caro moved to Coconut Grove, Florida and joined six other WASP’s. They named their rented house “The WASP Nest” and each worked on getting their Instructors Rating. Caro instructed in Miami and Fort Lauderdale, Florida. While instructing, she began entering aerobatic competitions. First in Jess Bristow’s “cut-up Cub” and later in Ben Bradley’s “Bradley’s Special”. Then while flying the glider act in Jess Bristow’s All Women’s Air Show, she had a chance to fly the second “Pitts Special” bi-plane built by Curtiss Pitts. She fell in love with that airplane. On a handshake deal between Curtiss and her father, Curtiss finished up the third Pitts Special with a 125 HP engine and the first of the CURTISS planes with an inverted carburetor engine to allow it to fly upside down. Caro, after flying it she said, “I surely thought I had died and gone to heaven!” That year on January 3, 1951 in the Miami Air Maneuvers Air Show, she became the International Women’s Aerobatic Champion in her “Pitts”. Earlier that same morning, she had taken off from the blimp base located on the Venetian Causeway (near Miami Beach) in a Piper Super Cruiser with a 125 Lycoming Engine to try to set an altitude record for Class II Aircraft. She set an official record of 30,203 feet for which she received the Bleriot medal and held the altitude record until the mid-1980s. For these two accomplishments, she was named Mademoiselle Magazine’s “Aviation Woman of the Year” in 1951. Shortly after that January day, Orsino Hugo Bosca, an acquaintance from Springfield called and asked if she knew any girls he could take to dinner while he was visiting Florida. She said, “I’m a girl and I am just as hungry as the rest of these girls down here”. He said, “Oh I thought you were a mechanic”. She replied, “I can do some of that, too”. So began the next phase in the life of Caro Bayley.

Hanging up her wings in 1951, Caro married Orsino Hugo Bosca. With her typical enthusiasm for life, Caro had four children in five years: D’Orsi Hugo, Martin Bayley, Caro-Gray and Marcy Elena Bosca. They lived in Springfield, Ohio summering in Wilmington, North Carolina and later in Harbor Springs, Michigan. Caro was a member of the Monday Afternoon Club, the B & S Investment Club and the bridge club.

She enjoyed skiing (OFOS), sailing, tennis and golf, and loved to travel. She especially enjoyed Italy and all aspects of the food wine, style and art experienced there. Regardless of her humble belief, Caro was an accomplished cook and had an unusual flair and ease with entertaining, as all friends and family will attest. She cheated at backgammon, but otherwise led an honest life.

Caro dreaded public speaking. For years, we would hear her laments that it was her turn to give a program at the Monday Afternoon Club. Years later, as President of the WASP’s, she found her voice speaking passionately about women in aviation, her experiences as a WASP and her love of flying. She always said, “She got her nickel’s worth out of her experience as a WASP”. She managed even more than that out of life every day. 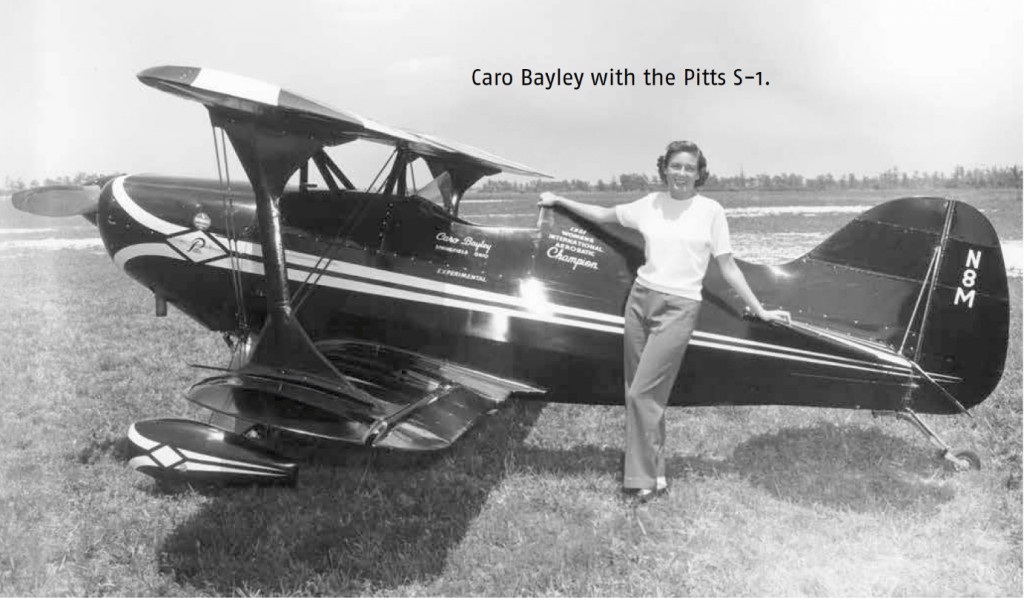