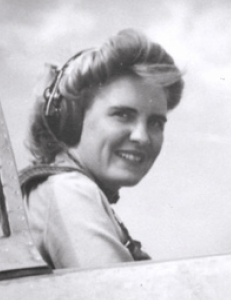 Celia M. Hunter was born in 1919 in Washington State and was raised a Quaker on a small farm during the Great Depression. Being raised a Quaker instilled value in her that she carried throughout her life. Celia’s values also instilled in her the confidence to follow her dreams, regardless of whether they were conventional paths for women.

Military service as a pilot

Hunter trained as a pilot and eventually became a pilot during World War II, as a member of the Women Airforce Service Pilots, also known as the WASP, graduating with class 43-W5. Hunter flew planes from the factories to training centers and ports of embarkation throughout the USA. She successfully completed each upgrading until she was qualified to fly the most sophisticated fighter planes in the US military.

The US Ferrying Division ruled that women should not be allowed to ferry military fighter planes any farther north than Great Falls, Montana. “We ferried them from factories clear across the US, but ‘sorry, gals, turn them over to the men here’ and they got to fly them on the Northwest Staging Route through Edmonton, Fort Nelson, Watson Lake, and Whitehorse to Fairbanks,” Hunter told students at Linfield College during a 1997 speech.

Two years later, Hunter and her good friend and fellow WASP, Ginny Hill Wood, decided that they would get to Fairbanks on their own, just to see what their male colleagues had been talking about. They made a deal with an Alaskan pilot who was in Seattle to fly two of his planes to Fairbanks. It took 27 days to fly from Seattle to Fairbanks, even though the total flying time added up to only 30 hours. Wood’s plane had unairworthy fabric and no heat – the women nicknamed it “Li’l Igloo.”

The two women arrived in Fairbanks on January 1, 1947 in the midst of a thick snowstorm. The temperature was almost −50 °F (−46 °C) and the only scheduled airline could not fly in those temperatures. Finding themselves stranded, Hunter and Wood secured jobs in a start-up travel agency. Hunter served as a flight attendant on the first-ever tourist trips to Kotzebue and Nome and planned the first sightseeing tours of Fairbanks. In autumn 1947, Hunter enrolled in the University of Stockholm in a special course designed for American GI students. After a semester in Sweden, Hunter and Wood spent ten months bicycling through war-torn Europe and eventually hitchhiked on tankers back to the United States, where they returned to Alaska.

Hunter and Wood, together with Wood’s husband, decided to start Camp Denali, which was planned to be similar to the hut systems in Europe, with simple accommodations coupled with outdoor activities. The threesome staked out a Trade and Manufacturing Site claim under the Homestead Act along the then-western boundary of Denali National Park, with a magnificent view of Mount McKinley, and opened for business in 1952. Their management philosophy was simple, “to create a setting in which our guests, staff, and even casual visitors would be aware of the wonders of the natural world that surrounded us.”  Camp Denali’s management closely reflected Hunter’s philosophy on life. “We specialized in providing healthy, sustaining meals, with fresh baked bread and pastries, and we refused to handle either soft drinks or beer in our small store because we didn’t want to see the throw-away cans littering the roadsides,” Celia once remarked. Camp Denali was sold in 1975 and now lies within Denali National Park.

As their business grew, so did their deep respect and love for the natural world and they found themselves increasingly involved in Alaska’s issues. When Celia and Ginny first arrived in Alaska, it was a Territory with approximately 180,000 people. “Flying across bush Alaska, the entire landscape was a seamless whole, unmarred by man-made boundaries. Alaskans assumed it would always be like this, and they resisted strenuously the setting aside of particular lands to protect them.” Alaska was changing rapidly before their eyes and they realized it was going to take a lot of work to protect the Alaskan wild-lands they loved.

Celia died on December 1, 2001 at age 82. She had been up late that night writing letters to Congressmen in support of protecting the Arctic National Wildlife Refuge from oil drilling. Her life spanned an important part of Alaska’s history. Celia was a cornerstone of the conservation movement in Alaska, opening minds and halting disasters with unwavering strength and persistence.

Celia’s list of accomplishments and her lasting legacy are affirmations that she was an effective leader for over 50 years. Celia was quoted that you just have to keep a fire in your stomach and you just go for it, and when you do, you can make a tremendous difference. Her leadership style included: being a good listener, led by example, think of the bigger picture, be engaged in the moment, persevere, be honest, passionate, respectful, humble, optimistic, human, compassionate, remain curious, credible, communicate well, be part of the community, keep a balance, be a mentor, stay youthful, have a sense of humor. Never stop learning. Although Celia graduated high school in 1936, served in the Women Air Force in 1943, she earned her Bachelor of Arts in Botany in 1964 with a minor in Economics and Anthropology from the University of Alaska Fairbanks.

In 1991 Celia Hunter was conferred the highest award by the Sierra Club, The John Muir Award, for a lifetime of dedicated conservation work, a distinguished record of achievement in national or international conservation causes.

In 1998, Celia Hunter was presented the highest award by the Wilderness Society, The Robert Marshall Award, for her long-term service to and notable influence upon conservation and the fostering of an American land ethic.

In 2001, The Alaska Conservation Foundation presented Celia Hunter and Ginny Wood with the first ever Lifetime Achievement Award, the cornerstone of the Alaska Conservation Hall of Fame. The ACF has an endowment fund named for Celia M. Hunter, that educates interested, young people for an environmental career.

In 1969 Celia was offered a position on the Governing Council of the Wilderness Society, in 1976 she was made president and later executive director; she was the first female to head a national environmental organization. In 1972, Celia was nominated by Secretary of the Interior Rogers C.B. Morton to sit on the joint Federal State Land Use Planning Commission where she articulated the environmentalists’ viewpoint. She worked with the Commission until it dissolved in 1980 with the passage of the Alaska National Interest Lands and Conservation Act.

Even with her notoriety, Celia did not stop looking for ways to further conservation in Alaska. In 1980, Celia and Denny Wilcher started the Alaska Conservation Foundation (ACF) to bring more resources to the conservation movement in Alaska and to continue the statewide networking that had been started with ACS. Celia served on the ACF Board of Trustees for over 18 years. She served on innumerable other boards including Alaska Natural History Assn., Nature Conservancy, Trustees for Alaska, and The Wilderness Society. Beginning in 1979, Celia contributed a regular column to the Fairbanks Daily News Miner offering an alternative voice with environmental and liberal themes to the community. In 1980 the Alaska National Interest Lands and Conservation Act (ANILCA) was passed, doubling the size of the Arctic National Wildlife Range and renaming it the Arctic National Wildlife Refuge.

In the mid and late 1970s, while serving on the Joint Federal-State Land Use Planning Commission for Alaska (headquartered in Anchorage), Celia Hunter became a magnet for mentoring young women arriving in Alaska from the southern states in search of both adventure and participation in one of America’s landmark conservation episodes: the apportionment of then-undesignated federal lands into forms with protected status (national parks and national monuments) versus unprotected status (United States Forest Service and Bureau of Land Management), culminating in Congressional passage in 1980 of the Alaska National Interest Lands Conservation Act.