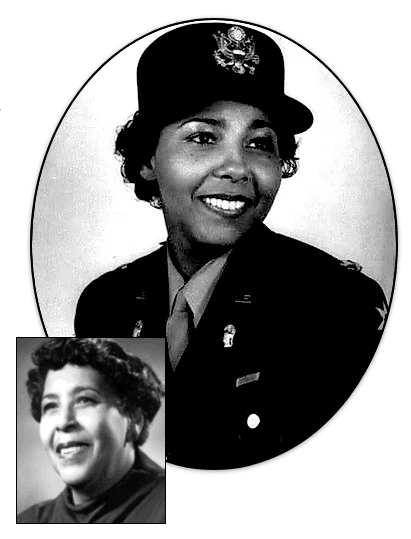 Adams was born on December 5, 1918 in Kitrell, North Carolina and grew up in Columbia, South Carolina. Her parents believed strongly in education and were high achievers. Her father, a college graduate, was a Methodist minister. Her mother was a schoolteacher. Adams was the oldest of four children. She graduated from Booker T. Washington High School as valedictorian and from Wilberforce University in Ohio in 1938, majoring in math and physics. After graduation, she returned to Columbia where she taught mathematics at the local high school while studying part-time for a M.A. degree in psychology at the Ohio State University. (She received her master’s degree in 1946.)

In early 1944, Adams was reassigned as the Training Center control officer in charge of improving efficiency and job training. She also had other responsibilities, such as surveying officer (finding lost property) and summary court officer (handling women’s minor offenses).

In December 1944, Adams led the only company of black WACs ever to serve overseas. They were stationed in Birmingham, England. The women began to socialize with the citizens and broke through prejudices on both sides. Adams was put in charge of a postal directory service unit. Another part of her job included raising the morale of women. Adams achieved this by creating beauty parlors for the women to relax and socialize in.

In March 1945, she was appointed the commanding officer of the first battalion of African-American women, the 6888th Central Postal Directory Battalion. They were stationed first in Birmingham. Three months later, they were moved to Rouen, France, then to Paris. They were responsible for the delivery of mail to over seven million soldiers during World War II.

By the completion of the war, Lieutenant Colonel Adams was the highest ranking African-American woman in the military. At the conclusion of the war, when asked about her ground breaking achievements, Adams responded simply, “I just wanted to do my job”. She decided to leave the service in 1946 when she was called to serve at the Pentagon.

Fighting Segregation and Racism in the Army

Growing up in the south, Adams experienced the hardships of segregation. When she entered the Army, she still faced discrimination, but was not afraid to speak up and fight for desegregation in the Army. One of the first battles Adams fought for equality was when the Army proposed segregating the training regiment. When she was told she would head one of the segregated regiments, she refused. Fortunately, the Army decided against creating separate regiments.

On another occasion, when a general stated, “I’m going to send a white first lieutenant down here to show you how to run this unit”, then Major Adams responded, “Over my dead body, sir.” The general threatened to court-martial her for disobeying orders. She then began to file charges against him for using “language stressing racial segregation” and ignoring a directive from Allied headquarters. They both dropped the matter.

Adams encouraged her battalion to socialize with white men coming back from the front and even the residents of wherever they were stationed. She wanted to create comradeship between enlisted personal and ease the tensions of racism.

After her service in the Army, she earned a master’s degree in psychology from Ohio State University. She then worked at the Veterans Administration in Cleveland, Ohio, but soon left to teach at the Miller Academy of Fine Arts. She moved to Nashville, Tennessee and was the director of student personnel at Tennessee A&I College. She then moved to Georgia and became the director of student personnel and assistant professor of education at Georgia State College.

Adams devoted much of her post-war life to community service. She served on the Board of Directors of Dayton Power and Light, the Dayton Metro Housing Authority, the Dayton Opera Company, the Board of Governors of the American Red Cross, and the Board of Trustees of Sinclair Community College. She volunteered for United Way, the United Negro College Fund, the Urban League, and the YWCA. She also co-directed the Black Leadership Development Program.

In 1949, Adams married Stanley A. Earley, Jr. They moved to Switzerland for a time while Stanley completed medical school. They returned to the U.S. in 1952 and settled in Dayton, Ohio where they had two children, Stanley III and Judith Earley.

Adams received many honors and awards, including the Top Ten Women of the Miami Valley Dayton Daily News, 1965 and Service to the Community Award from the Ohio State Senate in 1989. In 1987, she received the Senior Citizens Gold Watch Award. Adams was listed on the Smithsonian Institution’s 110 most important historical Black women, Black Women Against the Odds, in 1982. She was inducted into the Ohio Women’s Hall of Fame in 1979 and the Ohio Veterans Hall of Fame in 1993. She was also inducted into the South Carolina Black Hall of Fame and named citizen of the year by The Montgomery County Board of Commissioners in 199. In 1997, Adams was included in the BellSouth African-American History Calendar.

She also received honorary doctorates from Wilberforce University and the University of Dayton in 1991.