Many of those who served with the Tuskegee Airmen came home with fascinating and harrowing stories to tell. War was brutal. And fighting against racial segregation and discrimination was an unjust second battle to endure. The courage it took to persevere in that one facet itself is admirable. 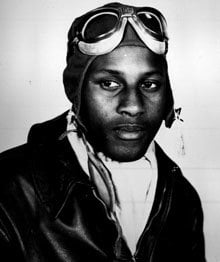 Charles Hall was born in 1920 in the small rural town of Brazil, Indiana. After graduating high school, he enrolled at Eastern Illinois State Teachers College, where he ran track and played football. Around this time, President Roosevelt opened up a pilot training program to African-Americans. Hall applied and was selected to train at Tuskegee Institute in Alabama.

Maj Hall ended up becoming an icon. As a fighter pilot with the 99th Fighter Squadron, he was the first Tuskegee Airmen – and African American – to shoot down an enemy aircraft in WWII, earning the group its first aerial victory credit. The kill happened on July 2, 1943. Hall was on an escort mission of B-25 medium bombers on a raid on Castelvetrano in southwestern Sicily, Italy when he shot down the Focke-Wulf Fw 190 Würger. He did so in a P-40.

1st Lieutenant Charles B. Hall, in the cockpit of his Curtiss-Wright P-40L Warhawk fighter, points to a swastika which represents the Luftwaffe Focke-Wulf Fw 190¹ that he shot down, 2 July 1943

The mission was his eighth. Hall spotted two Fw 190s encroaching on the bombers after they had dropped their payloads on the enemy airfield. He quickly maneuvered into the space between the bombers and fighters and turned inside the two Fw 190s. He fired a long burst at one of the air craft, as it turned left. After several hits, it fell off and crashed into the ground.

Hall, one of 43 pilots known as the Tuskegee Airmen, was handed a Coke as a reward from his squadron after becoming the first African-American to take down an enemy aircraft during World War II. He shot down a German fighter while his squadron was escorting U.S. bombers over Sicily, Italy.

The win would be the first and only aerial victory in all of 1943 for the Tuskegee Airmen. Hall would go on to down three more enemy aircraft before his time ended in WWII, an impressive record with only a few other Airmen earning four. In his military career, he flew 198 combat missions over Africa, Italy and other parts of Europe and was the first African-American to receive the Distinguished Flying Cross.

By the end of the war, Hall had been promoted to major and became the first African-American to be awarded the Distinguished Flying Cross. He flew nearly 200 combat missions during his military career.

Towards end of his military service, Hall went on a year-long war bond drive before moving to Chicago to work as an insurance agent. A few years later, he relocated to Oklahoma City, where he worked at Tinker Air Force Base and then the Federal Aviation Administration.

Unfortunately, Hall passed away in 1971 at the young age of 51. The Tuskegee Airmen, Inc. Charles B. Hall Chapter in Oklahoma City is dedicated to his legacy and that of all the Tuskegee Airmen. Tinker Air Force Base also honors Hall with its Charles B. Hall Airpark, which is free and accessible to the general public. See it in the CAF RED Tail Squadron Virtual Museum.

We salute Maj Hall for his service to our country, his aerial prowess and the fine example he has set for generations to come. RISE ABOVE!