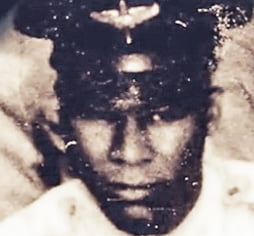 Johnson of Philadelphia graduated from flight training on Oct. 1, 1943, at Tuskegee Army Air Field in Alabama. In December, he deployed to Italy with the 100th Fighter Squadron, part of the 332nd Fighter Group.

On June 24, 1944, the  332nd Fighter Group was assigned a low-flying mission to strafe an enemy supply line near Aircasea, Italy. About 30 miles from the coast of Corsica, the engine quit in 2nd Lt. Johnson’s P-47 Thunderbolt. His plane hit the water almost immediately.

Johnson briefly recovered before making a belly landing, but failed to open the canopy before hitting the water. Johnson was trapped inside the plane as it sank.

Lt. Carl E. Johnson wrote to Charles Johnson’s wife, Isabelle, soon after the crash. The text of the letter was included in “The Tuskegee Airmen: The Men Who Changed a Nation” by Charles E. Francis and Adolph Caso:

“I cannot express to you how hard it is for me to write you at this time. You know that there is much in life that we do not understand, the ways of man, the movement of the elements and strange ways of God. Yet he is my one and only hope now.

“This week will live in my heart and memory in infamy. Your great and heavy loss has been mine. I cannot tell you how deeply hurt I am. He meant more to me than a brother. I would like to express my deepest and most sincere sympathy to you and your family at this hour and time in our lives.

“It will perhaps help some if I should say that he is not known to be lost. There is still a faint hope that he is alive. But in the annals of war, time makes a record. However, you must believe that the War Department will continue to make every effort to ascertain his whereabouts. The entire squadron maintains a hope and prayer that all is well. Yet if such is to be his case to give life, remember that he gave it in the line of duty, faithful and obedient to his mission against odds of battle and elements. This is all I can say …

Today a storm rages. It touches every little brook, every river, every nook. Yes, even the far distant edges of the sea. But tomorrow — the sun, isn’t it bright.”

Daily narrative mission reports of the 332nd Fighter Group for June 1944, notes “2nd Lt. Charles B. Johnson’s plane exploded as it hit the water, Time 0918 at 42 degrees 52 minutes North, 9 degrees, 31 minutes East.  There is no reference to the aircraft serial number, but the geographic coordinates of the crash are given.

Sources conflict as to exactly what happened during a mission on the way to strafe a target in northern Italy on Jun 24, 1944; but they agree that 3 aircraft crashed into the sea near Corsica at about the same time. Two of the pilots were killed and one survived. He was 1 of the 2 killed. He was officially declared dead Jun 23, 1945. His body was not recovered.

Charles B Johnson is buried or memorialized at Tablets of the Missing, American Cemetery – Sicily-Rome, Italy. This is an American Battle Monuments Commission location.