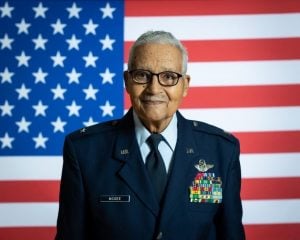 With the approval from the Department of the Air Force, Sen Chris Van Hollen and Rep Anthony Brown sponsored, with bipartisan support, the National Defense Authorization Act of 2020 passed on December 20, 2019 authorizing Charles’ honorary promotion to Brigadier General. On February 4, 2020 McGee was officially pinned Brigadier General by President Trump in the oval office. “It’s wonderful to be recognized for service and what it means to serve,” McGee said. “Certainly, to receive that honorary rank is very meaningful.” 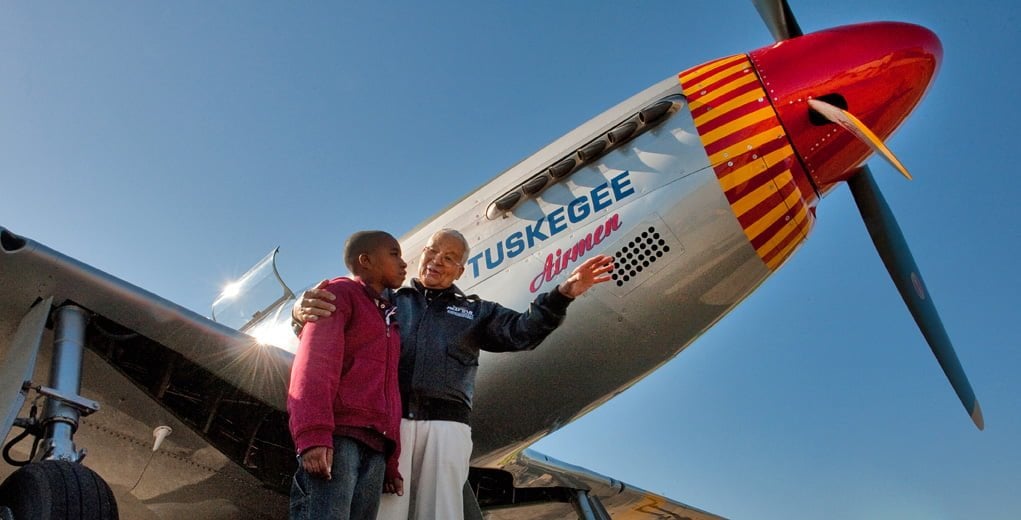 If you’ve even seen our film “Rise Above” in the RISE ABOVE Traveling Exhibit, then you might recognize original Tuskegee Airman pilot Charles McGee. He is featured in the film encouraging a young person to ignore negativity, rise above the challenges and follow his dreams.

McGee, a pilot with a celebrated career in the Air Force and beyond, has been an inspiration to thousands, speaking to people of all ages about his experience as a Tuskegee Airman and sharing life lessons that can impact people of all walks of life. He has been a guiding member of the CAF Red Tail Squadron since the group’s inception, and we are grateful for his support.

Born in Cleveland, Ohio on December 7, 1919, to Lewis Allen and Ruth Elizabeth Lewis McGee who died shortly after the birth of his sister. His father was, at times, a teacher, social worker and Methodist minister, jobs that led to frequent moves.

McGee spent his childhood in Ohio, Illinois and Iowa. He was a Boy Scout growing up, earning the prestigious rank of Eagle Scout on July 9, 1940.

In 1940 he enrolled at the University of Illinois to study engineering, then later life sciences. While in school, he was a member of the Reserve Officers’ Training Corps, Alpha Phi Alpha fraternity and Pershing Riffles, an elite drill team. During the summer he worked at a steel mill in Gary, Indiana to pay for tuition. It was during these years he met his future wife Francis, a fellow student.

On the afternoon of his 22nd birthday, December 7, 1941, McGee heard that news from Pearl Harbor that shocked the entire world. Although he had received his draft card in 1940, he now knew that his call to service would be imminent. The future of the country would change the fate for both him and Francis.

McGee knew he wanted the chance to fly, although his service would interrupt his schooling. His father had served in World War I as a commissioned officer and infantry chaplain. The stories of that War were terrible. Many whose draft numbers were being called were sent to the infantry. McGee hoped his draft call would wait until after he got into the newly created flying program at Tuskegee.

In April of 1942, McGee’s application began with written and physical exams, which he passed. Later that summer, he and Francis became engaged, and they were married October 17. The ceremony was held at his wife’s family home, and officiated by his father, a Methodist minister.

Just two days later, McGee received his orders, and was sworn in to the enlisted reserved on October 26 to prepare to become an Army Air Corps aviation cadet. He arrived at Tuskegee Army Airfield on November 24. They newlywed couple from the north had to abruptly forge a new life in the deeply segregated south. The transition was stark.

McGee earned his wings and commission as a 2nd Lieutenant on June 30, 1943, part of class 43-F. Along with his fellow pilots, he was sent to Selfridge Army Airfield in Michigan to begin combat training. By December 22, the group departed for overseas service.

By February 1944, McGee was stationed in Italy. During his time fighting in the European Theater, he conducted harbor and coastal patrols, strafed targets on the ground, protected bombers in the air on their dangerous missions, and performed fighter sweeps against German targets.

On August 24, 1944 during a mission to escort B-17s to Czechoslovakia, McGee and two other Tuskegee Airmen each shot down enemy aircraft. McGee’s aerial victory was a German Fw-190. During his time in World War II, he flew the Bell P-39Q Airacobra, Republic P-47D Thunderbolt and North American P-51 Mustang. 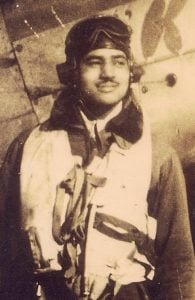 McGee returned stateside on December 1, 1944, having flown a total of 136 combat missions. He then became an instructor pilot for the North American B-25 Mitchell bomber for the 477th Bombardment Group – all black bomber pilots, navigators and bombardiers that were being prepared for war, but did not deploy before the end of conflict.

McGee remained on active duty 30 years. He became a command pilot with over 6,000 total flight hours, 1,151 of those in combat. He flew fighter aircraft combat tours in three major military conflicts, completing 405 missions for the Army Air Forces and the Air Force. He is one of the few fighter pilot who flew 100 or more combat missions in each of the following wars: World War II, Korea and Vietnam.

He went on to command the 44th Fighter Bomber Squadron in the Philippines from 1951-53, the 7230th Support Squadron in Italy from 1961-63, the 16th Training Squadron from 1967-68, and was the commander of the Richard-Gebaur Air Reserve Base in Missouri in 1972, the first black commander of a stateside Air Force Wing. 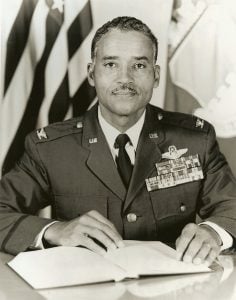 Upon his retirement from the United States Air Force on January 31, 1973, Colonel McGee amassed many awards for his service and valor. These include the Legion of Merit with Oak Leaf Cluster, Distinguished Flying Cross with two clusters, Bronze Star, Air Medal with 25 clusters, Army Commendation Medal, Air Force Commendation Medal with cluster, Presidential Unit Citation, Korean Presidential Unit Citation, the Hellenic Republic WWII Commemorative Medal, the French Legion of Honor, and several campaign and service ribbons. In 2011, he was inducted into the National Aviation Hall of Fame.

McGee finished his higher education with a degree in business administration, and went on to be equally successful in his civilian career as in his military service. He served as Director of Real Estate and Purchasing for ISC Financial Corporation and Vice President of Real Estate for its subsidiary, Interstate Securities Company. He later managed the Kansas City, Missouri downtown airport.

In his retirement, he remained active in his many community interests. He served in various leadership positions with the Boy Scouts of America, and in 2009 was honored with the Distinguished Eagle Scout award given to Eagle Scouts who have received extraordinary national-level recognition, fame, or eminence within their field, and have a strong record of voluntary service to their community.

McGee also served several years on the Kansas City, Missouri Amory Advisory Board, Aviation Advisory Commission, and as Director of the Kansas City Municipal Assistance Corporation. He enjoys his children, grandchildren and great-grandchildren, and remains active with his church and in his volunteer service. 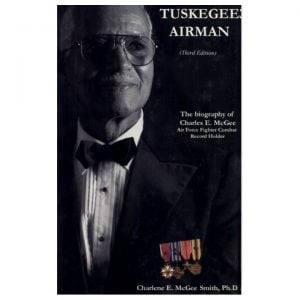 McGee is truly a national treasure. We salute you for your service, and for the fine example you set for us to RISE ABOVE and achieve our dreams!

This is a GREAT article titled “The Long, Happy Life of Tuskegee Airman Charles McGee”