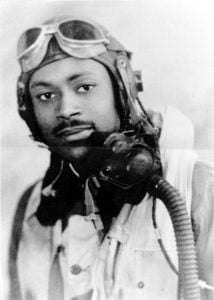 During World War II, many people stepped up to serve their country to help eradicate the hate that was fueling war across the world. Some families saw several of their sons and daughters join the fight. But the Bailey family from Punta Gorda, Florida can lay claim to NINE children signing up for the cause, remarkable and patriotic at its very least. Charles Bailey, the last of the family’s sons, would find his own spot in the history books as a Tuskegee Airman.

Archie and Josephine Bailey raised these children in the small town of Punta Gorda on the southwest coast of Florida – children that would go on to distinguish themselves in war during World War II, Korea and Vietnam; and in their careers after. Although their hometown offered no schooling for black families, the Bailey brothers and sisters had no option but to attend schools in other communities, a feat that could not have been easy for this tight-knit family. The injustices of segregation and deeply rooted racism presented unjust obstacles. But the Bailey family remained steadfast in the face of adversity.

After graduating from Howard Academy in Ocala, Florida, Bailey earned a football scholarship to attend Bethune-Cookman College in Daytona Beach. As fate would have it, Bethune-Cookman’s founder, Mary McLeod Bethune, was instrumental in getting President Roosevelt to open up the Tuskegee Institute for the training of black pilots during World War II. Bethune arranged for Bailey’s transfer to Tuskegee Institute after his first two years at Bethune-Cookman, where he enlisted in the Army Air Corps and learned to fly. He earned his wings on April 29, 1943 and shipped out for overseas combat duty the following month as part of the Allied invasion of North Africa. 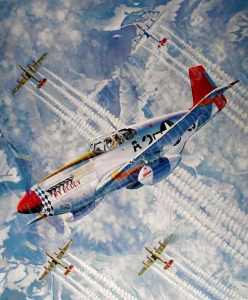 A rendition of Bailey’s P-51 Mustang “My Buddy” in action, courtesy of the artist, Troy White. Bailey named the aircraft for his father.

Bailey also saw action in Sicily, Naples-Foggia, Anzio, Rome-Anzio, Normandy, Northern France, Southern France, North Apennines, Rhineland, Central Europe, the Po Valley and Germany. It is said that once while flying over the Mediterranean Sea he was hit with shrapnel, but the Bible he carried in the pocket of his flight suit absorbed the blast, which would have hit his heart if it weren’t for his “good book.”

He flew 133 combat missions over enemy territory and is credited with the Distinguished Flying Cross, the Air Medal, Four Oak Clusters, and the Presidential Unit Citation for his service to our country.

After the war, Bailey completed two more years at Bethune-Cookman, earning a degree in elementary education. After a lengthy teaching career in DeLand, Florida, he earned credentials in undertaking and opened the Bailey Funeral Home. He and his wife Bessie raised two sons, Charles, Jr. and James. Mr. Bailey passed away in 2001, and is still remembered for his remarkable service and sacrifice. In fact, the “Fighting Bailey Brothers” are much respected in their hometown, with a terminal named after their family and plaque in their honor on display at the Charlotte County Airport in Punta Gorda to remember the sons of this fine family – Maurice, Berlin, Charles, Harding, Paul, Arthur and Carl. 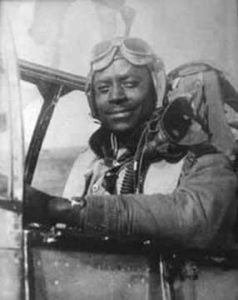 Charles Bailey and his brothers and sisters have given more in service to their country than the average family, and did so in a time when they were not rewarded for their sacrifice, instead returning from war as second-class citizens. We honor the history of the Tuskegee Airmen and thank Charles Bailey for his service, and will continue to educate people of all ages to ensure his legacy is not forgotten.

The CAF Red Tail Squadron is a volunteer-driven organization dedicated to educating audiences across the country about the history and legacy of the Tuskegee Airmen, America’s first black military pilots and their support personnel.G